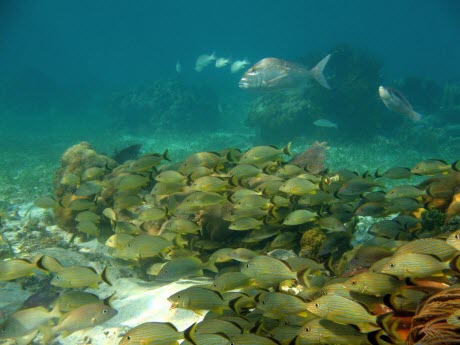 The findings are published in the journal Nature on March 22.

MPAs, which include marine reserves, sanctuaries, parks, and no-take zones, are areas designated to protect marine species and habitats from both global and local threats.

After four years compiling and analyzing data on site management and fish populations in 589 MPAs around the world, Dr. David Gill and his co-authors discovered that shortfalls in staffing and funding are hindering the recovery of MPA fish populations. While fish populations grew in 71 percent of MPAs studied, the level of recovery of fish was strongly linked to the management of the sites. At MPAs with sufficient staffing, increases in fish populations were nearly three times greater than those without adequate personnel. Despite the critical role of local management capacity, however, only 35 percent of MPAs reported acceptable funding levels and only 9 percent reported adequate staff to manage the MPA.

"Our study identified critical gaps in the effectiveness and equity of marine protected areas," said Gill, who conducted the research during a postdoctoral fellowship supported by the National Socio-Environmental Synthesis Center (SESYNC) and the Luc Hoffmann Institute. "We set out to understand how well marine protected areas are performing and why some perform better than others. What we found was that while most marine protected areas increased fish populations, including MPAs that allow some fishing activity, these increases were far greater in MPAs with adequate staff and budget."

Marine protected areas are rapidly expanding in number and total area around the world. In 2011, 193 countries committed themselves to the Convention on Biological Diversity Aichi Targets, including a goal of "effectively and equitably" managing 10 percent of their coastal and marine areas within MPAs and "other effective area-based conservation measures" by 2020. In the last two years alone, over 2.6 million square kilometers have been added to the portion of the global ocean covered by MPAs, bringing the total to over 14.9 million square kilometers.

As countries continue to expand their coverage and create new MPAs to achieve national targets, many unanswered questions remain: Are MPAs meeting their social and ecological objectives? Are they being managed "effectively and equitably"? How can we ensure that MPAs deliver the ecological and social benefits they were designed to produce?

Led by Gill, a multinational and multidisciplinary research team worked to answer these key questions. The study used rigorous statistical methods to identify changes in fish populations attributable to the MPA and not due to other pre-existing factors, such as preferentially locating MPAs where threats are low.

"These results highlight the potential for an infusion of resources and staff at established MPAs—and at MPAs in the pipeline—to enhance MPA management and ensure that MPAs realize their full potential," said Dr. Helen Fox of the National Geographic Society, who led the research initiative together with Dr. Michael B. Mascia of Conservation International. "The good news is that this is a solvable problem. MPAs perform better when they have enough staff and an adequate budget."

"The risk is that MPAs proliferate without further investment in MPA management, leaving new sites without the resources they need to deliver on their promises. If resources are reallocated to new MPAs from currently protected areas, that could weaken these older sites, too," added Mascia.

The authors propose policy solutions including increasing investments in MPA management, prioritizing social science research on MPAs, and strengthening methods for monitoring and evaluation of MPAs.

"SESYNC is a leader in bringing together scholars to address emerging problems—such as issues around marine protected areas and conservation—through new interdisciplinary research partnerships to improve understanding," said Margaret Palmer, director of SESYNC and a distinguished university professor at the University of Maryland. "The scholarship that David Gill and his team have highlighted in their Nature study is a reminder that interdisciplinary synthesis research can foster actionable science."

"While the momentum around the creation of new marine protected areas is exciting, it's essential that we don't leave existing MPAs behind," said Gabby Ahmadia, WWF's lead marine scientist. "This research highlights the need to be thoughtful and critical about how we support existing MPAs to optimize benefits for both people and nature."

"There are huge expectations of MPAs in protecting marine biodiversity, but until this study we didn't have a truly comprehensive picture of whether, and under what conditions, they are likely to be effective," said Jon Hutton, director of the Luc Hoffmann Institute. "The study in some ways points out the obvious—that investing in management and capacity is key for biodiversity outcomes in MPAs. But it is alarming to see how few MPAs have sufficient financial and human capacity, pointing to a clear need for further investment."

"People around the world depend on marine resources that are managed fairly and effectively. With global collaborations, we can identify strategic future investments in marine protected areas, and track progress towards better outcomes," said Dr. Emily Darling, associate conservation scientist at Wildlife Conservation Society, who leads a global coral reef monitoring program.