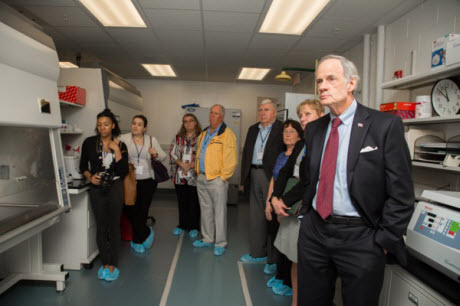 U.S. Sen. Tom Carper tours the newly-renovated Lasher Laboratory.Photo courtesy of the University of DelawareThe renovations to the lab were completed courtesy of $4 million in funding from the Delaware General Assembly and will serve to help with avian research diagnosis and early detection surveillance of avian diseases that have the potential to devastate the state’s poultry industry.

“The Lasher Lab represents the front line of defense for diagnosing and controlling avian diseases and it services the state’s $3.2 billion poultry industry,” said Mark Rieger, dean of UD’s College of Agriculture and Natural Resources (CANR). “Lasher will be the go to place if there is an outbreak of avian influenza. Thanks to the strong support supplied by the state of Delaware, the lab has been completely renovated and now provides state of the art diagnostics and surveillance services for the agricultural industry in Delaware.”

Rieger added that Lasher is the newest addition to CANR’s facilities and is part of a network that comes together across the three counties to meet agriculture and natural resources needs in the state.

“In addition to the diagnostic and surveillance services, Lasher provides our scientists in Newark with information on what is happening in the industry in real time,” Rieger said. “Without it we wouldn’t have a continuum between the basic ideas that are being researched in Newark and the practical, on the ground, real time problems that are occurring out in the industry, so it is incredibly important.”

U.S. Sen. Tom Carper called the facility renovations “a great investment” and noted that as the nation exports more chickens, keeping those chickens healthy is of the utmost importance.

“It used to be for every 100 chickens we raised in Delmarva, we exported zero to other countries. Today it’s 20 and it’s growing,” said Carper.

The senator added that it is important to invest in facilities like Lasher to ensure that chickens raised in the U.S. can continue to be exported.

Delaware Secretary of Agriculture Ed Kee — a CANR alumnus who noted that he worked in the Carvel facility for 26 years as a vegetable crop specialist and four years before that as a county agriculture agent — said the facility that houses the newly renovated Lasher Laboratory has served agriculture since the University acquired it in 1941.

“It has a wonderful history of serving agriculture not only in Sussex County but for the whole state,” said Kee.

Kee said that he and Gov. Jack Markell were thrilled that the state, through the legislature, made the $4 million commitment to ensure that Lasher is outfitted with the latest facilities and equipment to protect the Delaware poultry industry.

“In Delaware, we sell about 225 million chickens a year, and on the Delmarva Peninsula it’s well over 500 million,” Kee said. “Each one of those chickens has to be healthy and the surveillance and the research that’s going on here and at the Allen Lab (on the Newark campus) is ensuring that. The industry is important because, at the bottom line, it is about the farmers out there on the land making a living.”

Charles Riordan, deputy provost for research and scholarship, thanked the Lasher family, Kee and the state legislators for making the laboratory renovations possible. He said it was a team effort that allowed the University to move forward with the improvements to the facility.

Riordan said the facility is focused on learner-centered research and said that UD is committed -- through the work of its students, faculty and staff -- to having an impact in the region and the state.

“The focus really is on that,” he said. “Whether it be our scholarship in the lab next door, on the main campus, on the Lewes campus, whether it be through our education activities or our outreach activities, it’s all about taking the work at UD and having it out in the community.”

Riordan added that there is a two-way street in that the University is “not only informing the community with our work, but that the community is bringing their work, through partnerships, to UD.”

Jack Gelb, director of the avian biosciences center and professor in the Department of Animal and Food Sciences, said that as a land grant university, UD has a rich tradition of serving agriculture and poultry and he said that service has never been stronger.

“Through the renovation of Lasher Lab, we are positioned to be sustainable for the next 35 years. Our goal is clear, to continue and even strengthen the productive partnerships we’ve enjoyed,” said Gelb.

Gelb noted that what makes UD particularly unique is that “our laboratory system in Delaware is directly linked to the University whereas in many states, those diagnostic activities are often performed through the departments of agriculture.”

The unique structure provides strength in that “our scientists and our veterinarians can observe what’s going on in the field with any particular type of disease condition and reflect that very efficiently to researchers and others who can help develop mitigating ways of controlling disease through outreach and extension,” Gelb said, adding, “That is very powerful and has kept us directly connected to the industry.”

Mark Isaacs, director of the Carvel Center, closed the ceremony by thanking the Lasher family for their commitment to UD -- a commitment that made the laboratory possible.

He also thanked Kee and legislators who attended, and singled out Tom Hudson, UD construction manager, and Brenda Sample, Lasher Lab coordinator, who made the renovations a reality.

Of Kee, Isaacs said, “His efforts were phenomenal in navigating and helping us do this. Ed, we can’t say enough about your continued support for the facility and for our campus and the college as well and our legislative body, members of the General Assembly and the county. I’ve been with UD for 29 years and you talk about a partnership -- what a phenomenal partnership we have with our local legislative body. They truly care, they’re sincere in their mission in serving their constituents, and they really care about agriculture.”

Before leaving for the tour, Isaacs said that the participants were going to see “a lab that was designed by the troops that work in it. What you’re going to see is a dynamite, hands-on, lab staff driven facility that has taken us into the next millennium.”