KANAZAWA, JAPAN — Researchers at Kanazawa University monitored the emission of blue-green light from water-soluble tetraphenylethene molecules adsorbed at a phospholipid-adsorbed liquid-liquid interface made to resemble a biomembrane. They found that the process could be reversibly controlled by an externally applied potential (voltage), which opens up the possibility of a new class of molecular probes and targeted drug delivery systems.

The targeted delivery of therapeutic drugs or DNA directly to cells has many uses for treating disease, hence there is increasing interest in biomolecules that interact directly with cell membranes. Aggregation-induced emission (AIE), a promising technique with applications for functional materials, optoelectronics, and biomedical engineering, is a process by which self-aggregates can be made fluorescent upon stacking together. Tetraphenylethene (TPE) derivatives are propeller-shaped molecules with four phenyl rings which exhibit this property. Individually, these molecules are non-fluorescent, because their photo-excited states decay to the ground state through non-emissive molecular vibration or rotation. However, when several of these molecules aggregate together, they become fluorescent and emit blue-green light. 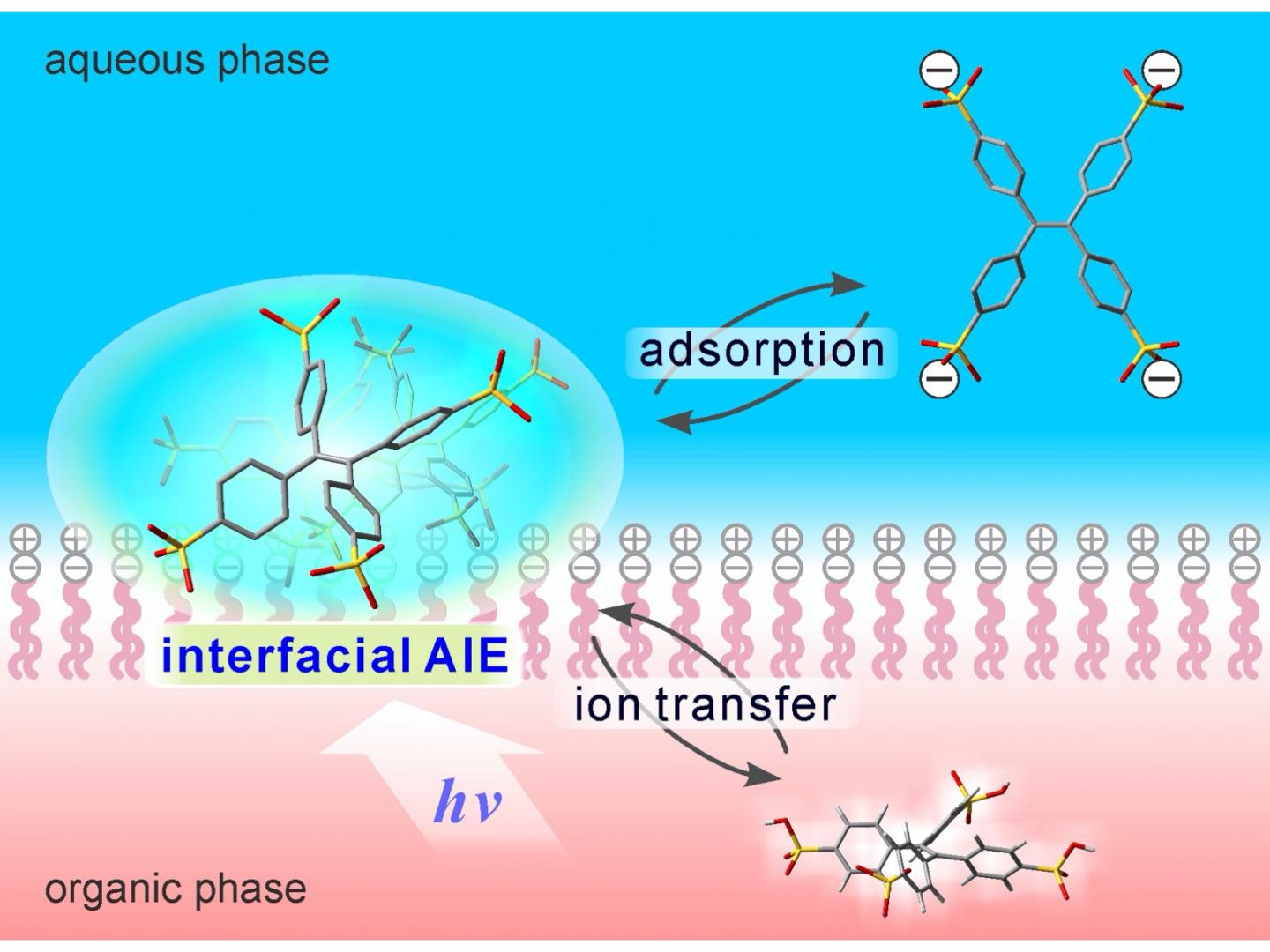 Researchers from the Institute of Science and Engineering at Kanazawa University studied the AIE behavior of water-soluble TPE derivatives on an artificial cell membrane surface that was formed by self-assembly of phospholipid molecules, which each have a hydrophilic (water-loving) "head" and two hydrophobic (water-fearing) "tails."

Phospholipids can also be used to make bubbles called vesicles that can fuse with living cell membranes to deliver a drug or DNA payload.

"Potential applications of this work include the selective labeling of targeted vesicles containing pharmaceutical drugs," says senior author of the study Hirohisa Nagatani.

Using ion transfer voltammetry and surface-sensitive modulation spectroscopy, the research team was able to show that the phase transfer and interfacial adsorption of charged TPE molecules occurred reversibly based on an applied potential. This mimics the membrane potential of the living cells, which plays a crucial role in many physiological processes, including ion transportation and nerve impulse transmission.

"The voltage-induced behavior we observed in simple water-soluble molecules may be important for the development of new sensitive probes of membrane potential for biomedical applications," explains Nagatani. "Our system could also be an alternative to voltage-sensitive dyes as molecular probes."

The researchers also note the possibility of using this system as a photosensitizer for cancer phototherapy, in which cells can be selectively marked for light radiation.

- This press release was originally published on the Kanazawa University website