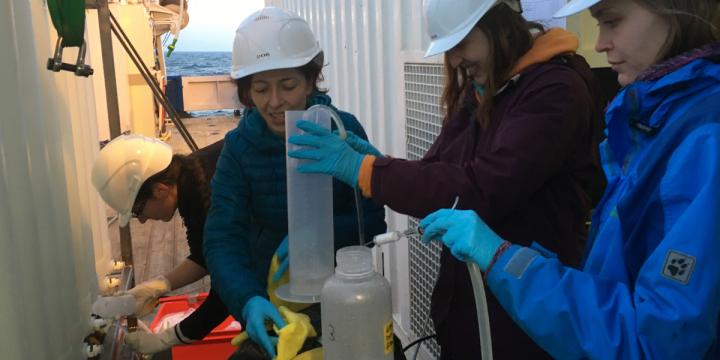 Current research suggests that more complex life-forms, including humans, evolved from a symbiosis event of Bacteria and another single-celled organism known as archaea. However, evidence of a transition period in which the two organisms mixed where nowhere to be found. That is, until now. In the deep waters of the Black Sea, scientists found microbes that can make membrane lipids, a layer that surrounds a cell like a skin, of unexpected origin. Researchers from Royal Netherlands Institute for Sea Research (NIOZ) and Utrecht University have published their findings in the prestigious ISME Journal.

Cells are surrounded by a layer of membrane lipids that protect them from changes in their environment such as temperature, much in the same way that our skin changes when we are cold or exposed to the sun. Lead author and NIOZ senior scientist Laura Villanueva explains why they make such interesting biomarkers:  "When a cell dies, these lipids preserve like fossils and hold ancient-old information on Earths' early environmental conditions."

Our tree of life includes small and simple cells (bacteria and archaea) and more complex cells (eukaryotes), including animals and humans. Bacteria and eukaryotes share a similar lipid membrane. Looking at archaea, their 'skin' or membrane looks very different and is primarily designed to help these microorganisms to survive in extreme environments.

"This 'lipid divide,' or difference in membranes between bacteria and eukaryotes on the one hand and archaea on the other, is believed to have happened after the emergence of bacteria and archaea from the last universal cellular ancestor (LUCA)," Villanueva says.

The leading theory is that eukaryotes evolved from a symbiosis event between archaeal and bacterial cells in which the archaeal cell was the host. But how does this work when their 'skins' are so different and share no sign of common ancestry?

"To explain the creation of more complex life-forms, the archaeal membrane must have made a switch to a bacterial type membrane. Such a switch likely needed a transition period in which the two membrane types were mixed," Villanueva says. However, mixed lipid membranes had never been found in microbes until the team of Villanueva made an unexpected discovery in de deep waters of the Black Sea.

"We found a possible missing piece of this puzzle in the Black Sea. Here, an abundant group of bacteria thrive in the deep-sea, absent of oxygen and with high sulfide concentration. We discovered that the genetic material of this group did not only carry pathway genes for bacterial lipids but archaeal ones as well," she says.

The peculiarity was also found in the genetic material of other, closely related bacteria and supports the idea that this ability to create 'mixed' membranes is more widespread than previously thought. This discovery sheds new light on the evolution of all cellular life forms and may have important consequences for the interpretation of archaeal lipid fossils in the geological record and paleoclimate reconstructions.

- This press release was originally published on the NIOZ website