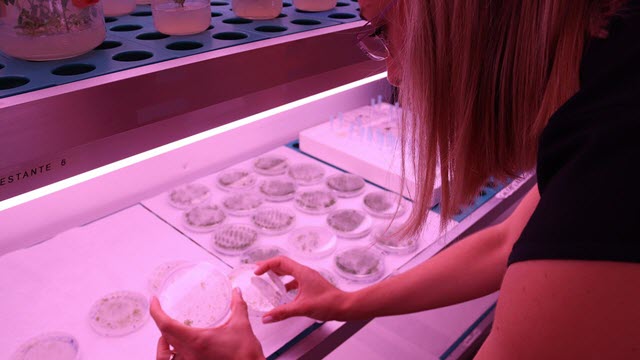 Researchers of the Universitat Politècnica de València (UPV) and the University of Málaga (UMA) have discovered a new function in the BAG4 plant protein. In the study, they prove that this protein takes part in the regulation of the plant transpiration, the transport of potassium in occlusive cells and thus, the opening of the stomas, the pores located on leaves, from where the plant transpires. This finding is particularly significant for developing crops that are more resistant to drought conditions. Their work has been published in the Plant Physiology journal.

In the study, in which the French center BPMP (Biochimie et Physiologie Moléculaire des Plantes) has also participated, the researchers did an analysis of proteins that are able to physically interact with the channel that regulates how potassium enters the occlusive cells of the plant-known as KAT1-and later they studied how this protein regulated the KAT1 function.

"KAT1 is responsible for the potassium entering the occlusive cells, which directly affects the opening of the stomas and, finally, the plant transpiration. Our aim was focused on knowing how the transport of potassium is regulated in order to improve it in the future," explains Antonella Locascio, researcher at the Institute for Plant Molecular and Cellular Biology (IBMCP), a joint center between UPV and CSIC.

In order to do that, the team of UPV, the University of Málaga and BPMP looked for proteins that directly interact with the KAT1 channel, using Arabidopsis thaliana as a model plant. "We did a biochemical and genetic study of the BAG4 protein to assess its interaction with and effect on the channel. From this study, we discovered that the presence of this protein significantly improves the transport of potassium, contributing to it arriving at the plasma membrane of plants," explains Lynne Yenush, researcher at IBMCP (UPV-CSIC).

According to the researchers, the identification of physiologically significant regulators, in this case, the BAG4 protein, opens up the door to new strategies to obtain plants more resistant to stressful water situations and less vulnerable to the action of several pathogens.

"Stomas are a main structure that regulate the efficiency of the use of water, as well as the entry door of many pathogens that affect agriculture. Knowing the molecular level and how the complex process of stomas opening and closing is regulated can help us to design new crops resistant to pests and drought," concludes José Miguel Mulet, researcher at IBMCP.