University of Saskatchewan (U of S) scientists have developed a new immunotherapy technique that nearly eliminates the allergic response to peanut and egg white proteins in food-allergic mice, reducing the anaphylactic response by up to 90 per cent with only one treatment. 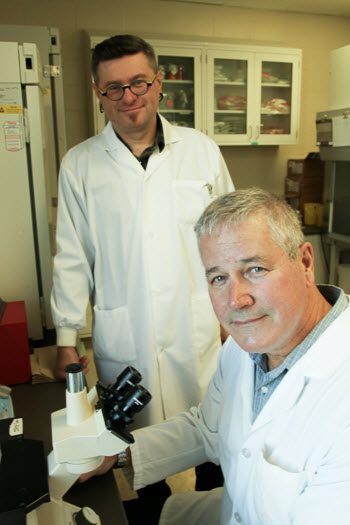 Lead scientist John Gordon (foreground) and Wojciech Dawicki (background), first author of the article, in Gordon’s lab at the U of S.Photo courtesy of the University of Saskatchewan“This discovery reverses food allergies in mice, and we have many people with allergies volunteering their own cells for us to use in lab testing to move this research forward,” said professor John Gordon, lead scientist behind the discovery just published in the current issue of the Journal of Allergy and Clinical Immunology.

The findings open the door to test this new allergy treatment in “humanized mice”—mice with non-existent immune systems implanted with cells from a human immune system, for example, from a peanut-allergic person. With Health Canada approval, the first human trial could begin in about one year, Gordon said.

“If we can reliably ‘cure’ food allergies, or related conditions such as asthma or autoimmune diseases such as multiple sclerosis with this new therapy, it would be life-changing for affected individuals.”

Roughly 2.5 million Canadians self-report having at least one food allergy. Anaphylaxis, defined as a severe rapid-onset allergic reaction, can be life-threatening and treatment options are limited.

The discovery involves generating a type of naturally occurring immune cell that sends a signal to reverse the hyper-immune response present in allergic reactions.  That signal triggers another “off switch” that turns off reactive cells further along the allergic pathway.

“We predict the treatment could be on the market within the next five to ten years,” said Gordon, who is also a research leader in the Allergy, Genes and Environment (AllerGen) Network. AllerGen—part of the federally funded Networks of Centres of Excellence program—aims to help Canadians address the challenges of living with asthma, allergies, anaphylaxis, and related immune diseases.

Gordon’s team will collaborate with other AllerGen investigators located at the U of S, McGill University, Queen’s University, McMaster University, and University of Alberta to pilot the new technique.

“This discovery portends a major breakthrough towards a therapeutic reversal of food allergen sensitivity,” said Dr. Judah Denburg, scientific director and CEO of AllerGen. “The treatment prevents anaphylactic responses in what were previously fully sensitive mice, opening the door for translating this therapy into the clinic.”

There is compelling evidence this technique could be effective in humans.  In 2010, Gordon’s team demonstrated they could reverse an asthmatic response in human cells in a test tube. Using three applications of a similar therapy in a 2012 study, the researchers effectively eliminated asthma in afflicted mice, within only eight weeks.

“Even if we only cure 25 per cent of subjects, we will dramatically improve the health of those individuals, and also reduce healthcare system expenses,” said Gordon, who worked with Wojciech Dawicki, a research associate and the primary author and lead researcher in this study. Master’s student Chunyan Li and lab technicians Xiaobei Zhang and Jennifer Town also worked on the project.

Here’s how the technique works:

The treatment reduced the observed symptoms of anaphylaxis, and lowered other key protein markers in the allergic response by up to 90 per cent.

Food allergy is a growing public health issue in Canada. Currently, there is no known cure. According to the Canadian Institute for Health Information, an estimated 171,000 Canadians visited emergency rooms for allergic reactions from 2013 to 2014, the rate of anaphylaxis visits increased by 95 per cent from 2006 to 2014, and the severity of reactions is increasing.

Gordon said the new technique also shows promise for treating autoimmune disorders such as multiple sclerosis. “It would take very little to adapt the therapy for autoimmune diseases,” he said.

Funding for the research was provided by the Canadian Institutes of Health Research and the AllerGen Networks of Centres of Excellence. 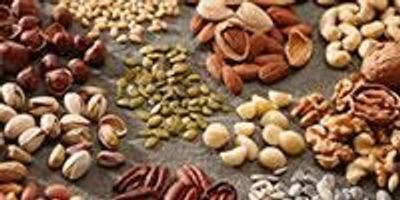