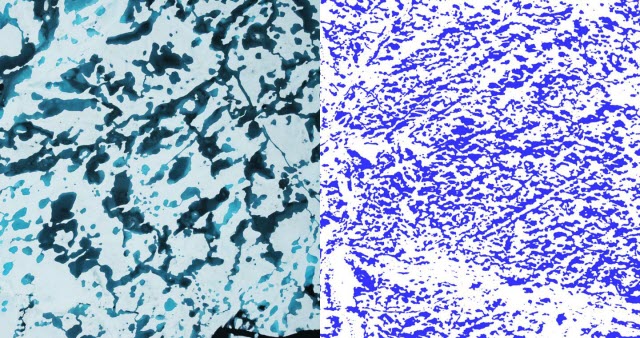 (Left): This is an aerial photos of actual melt ponds atop Arctic sea ice. (Right): A mathematical trick to model these ponds easily and accurately in large climate models.Images courtesy of Healy-Oden Trans-Arctic Expedition (2005) and Popovic et al.

This one simple mathematical trick can accurately predict the shape and melting effects of ponds on Arctic sea ice, according to new research by University of Chicago (UChicago) scientists.

The study, published April 4 in Physical Review Letters by researchers with UChicago and MIT, should help climate scientists improve models of climate change and perhaps plug a gap between scientific predictions and observations over the past decade, they said.

Every winter, some of the ocean freezes into ice. Much of the Arctic ecosystem—from polar bears to algae—revolves around this sea ice. It also has a significant impact on the global climate; it can reflect heat back out to space so the Earth doesn't absorb it, and it's a major player in ocean circulation.

"But sea ice cover has been shrinking, and significantly faster than our models predict," said Predrag Popovic, a UChicago graduate student and first author of the paper. "So we're looking for where the discrepancy might be."

Related Article: What Is Your Contribution to Arctic Sea Ice Melt?

One possibility is melt ponds. As the sun shines and the ice melts, ponds of water form atop the ice. These ponds absorb extra sunlight, because they're darker than ice, which in turn causes the rest of the ice to melt faster. Their size and shape also influence how ice breaks up, and how much light gets to organisms living below the ice.

Popovic, along with professor Mary Silber and associate professor Dorian Abbot of the University of Chicago, wondered if there was a better way to statistically model these ponds. Their "void" method starts by creating a series of random circles, allowing them to overlap and considering the voids between the circles as melt ponds.

This turns out to be quite effective at estimating how actual melt ponds form and behave, which they found by comparing them to aerial images of melts taken in 1998 and 2005.

"You can get similar characteristics using other mathematical methods, but the void model is much simpler and just as accurate," Abbot said. "Knowing this simple technique can accurately describe ponds could improve our predictions of how sea ice will respond as the Arctic continues to warm."

"It really sets a target for understanding of sea ice," Silber added.