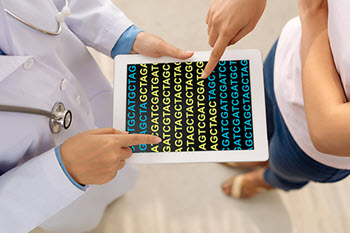 Programs supported by the National Institutes of Health are establishing which genes and genomic variants play a role in human disease, enabling their use in genomic medicine and research. NIH's Clinical Genome Resource (ClinGen) and ClinVar programs address a major barrier to incorporating genomic medicine into healthcare, which is a lack of evidence about the relationship between gene variants and diseases. A special issue of Human Mutation, published on Oct. 12, highlights the broad array of advances made through these programs, which work in concert to advance knowledge connecting human genomic variation to human health.

The National Human Genome Research Institute (NHGRI) established ClinGen in 2013 with additional support from the Eunice Kennedy Shriver National Institute of Child Health and Human Development and the National Cancer Institute. The goal of ClinGen is to bring together clinical and research experts to develop standard processes for reviewing data about gene variants and their connections to health and disease. These experts then determine what each variant might mean for disease diagnosis and treatment. Information on the gene variants is stored in ClinVar, which is funded and maintained by NIH's National Center for Biotechnology Information, part of the National Library of Medicine.

"Through the work of ClinGen and ClinVar, more than 730 researchers, clinicians and curators from 230 institutions have been working together to standardize the evaluation of genes and genomic variants implicated in human disease," said Eric Green, MD, PhD, NHGRI director.  "Ultimately, these efforts will lead to improved implementation of genomic medicine and higher-quality patient care."

ClinGen researchers developed a Gene-Disease Validity Framework to evaluate the role of gene variants in a given disease. Fourteen gene curation expert panels, comprised of clinicians and researchers from around the world with expertise in diseases such as cancer, neurodevelopmental disorders and cardiovascular disease, are implementing this framework. In the special issue, two expert panels reported on genes associated with epilepsy and RASopathies; the latter is a group of rare genetic conditions that include Noonan syndrome, Cardio-Facio-Cutaneous syndrome, Costello syndrome and Legius syndrome. Eight of 16 genes for epilepsy along with six of the 20 genes evaluated for their contribution to RASopathies had insufficient evidence to support a role in disease. These findings will help guide laboratories to decide which genes to test as part of diagnostic evaluations.

ClinGen researchers are also leveraging guidelines developed by the American College of Medical Genetics and Genomics and the Association for Molecular Pathology to identify those specific variants within a gene that lead to disease and those that do not. In four published papers, ClinGen's Variant Curation Expert Panels provide an overview of how they customized the guidelines to address unique aspects of the genes, including those for hearing loss, CDH1 (associated with stomach and breast cancer), PAH (associated with phenylketonuria), and PTEN (associated with a tumor syndrome). Clinicians can use the expert-classified gene variants available in ClinVar to decide whether a variant they encounter in their patients is contributing to disease. Researchers can also select certain gene variants to study in their laboratories.

"ClinGen and ClinVar are great examples of how different parts of NIH, the extramural research community and clinical testing laboratories from around the world have joined forces to improve how we share genomic information and use it to improve our understanding of the relationship between variation in DNA sequence and disease," said Heidi L. Rehm, PhD, a clinical genomicist and a ClinGen principal investigator at the Broad Institute of MIT and Harvard and Massachusetts General Hospital, Boston. Dr. Rehm, Jonathan S. Berg, MD, PhD, University of North Carolina at Chapel Hill; and Sharon Plon, MD, PhD, Baylor College of Medicine, Houston, provided an overview of the programs and served as co-editors for the 25-paper special issue.

ClinGen researchers have also developed an approach to assess the clinical actionability of secondary findings, which in this context are genomic variants identified in a person that could potentially cause a disease even if they were not the original focus of the diagnostic test.

The ClinVar database aggregates information about genomic variants and their relationship to human health and has fostered the ability to share and compare gene variant classifications from different research and clinical groups. This has been critical to the work of ClinGen's expert panels by allowing them to work closely with the laboratories sharing data to resolve differences in gene variant interpretations, ensuring more accurate results for patients.

ClinGen's patient registry, GenomeConnect, has enabled patients who have undergone genomic testing to contribute their genomic variants and clinical data to ClinVar. As of April 2018, 1,601 participants from 32 countries had enrolled in GenomeConnect. The registry also enables patients to connect with clinicians, researchers and other participants. Registry participants can also be alerted when the laboratory that performed their testing updates information about their gene variants. To date, 13 updates have been identified and are being returned to participants who choose to receive this information.

To help establish a common language for genomic databases to "speak" to each other, ClinGen developers built the ClinGen Allele Registry, which enables universal identification of gene variants. The data model underlying the registry conforms to the standards being developed by the Genomic Knowledge Standards Work Stream of the Global Alliance for Genomics and Health.   "ClinGen and ClinVar researchers and clinicians have worked tirelessly to curate knowledge for use in genomic medicine and research," said Erin M. Ramos, PhD, M.P.H., and NHGRI's ClinGen Program Director. "It's an enormous challenge, but the community is working to automate approaches and speed up our processes. Given that clinical genomic testing is becoming more common, knowing which gene variants contribute to disease is imperative to providing the best care possible."