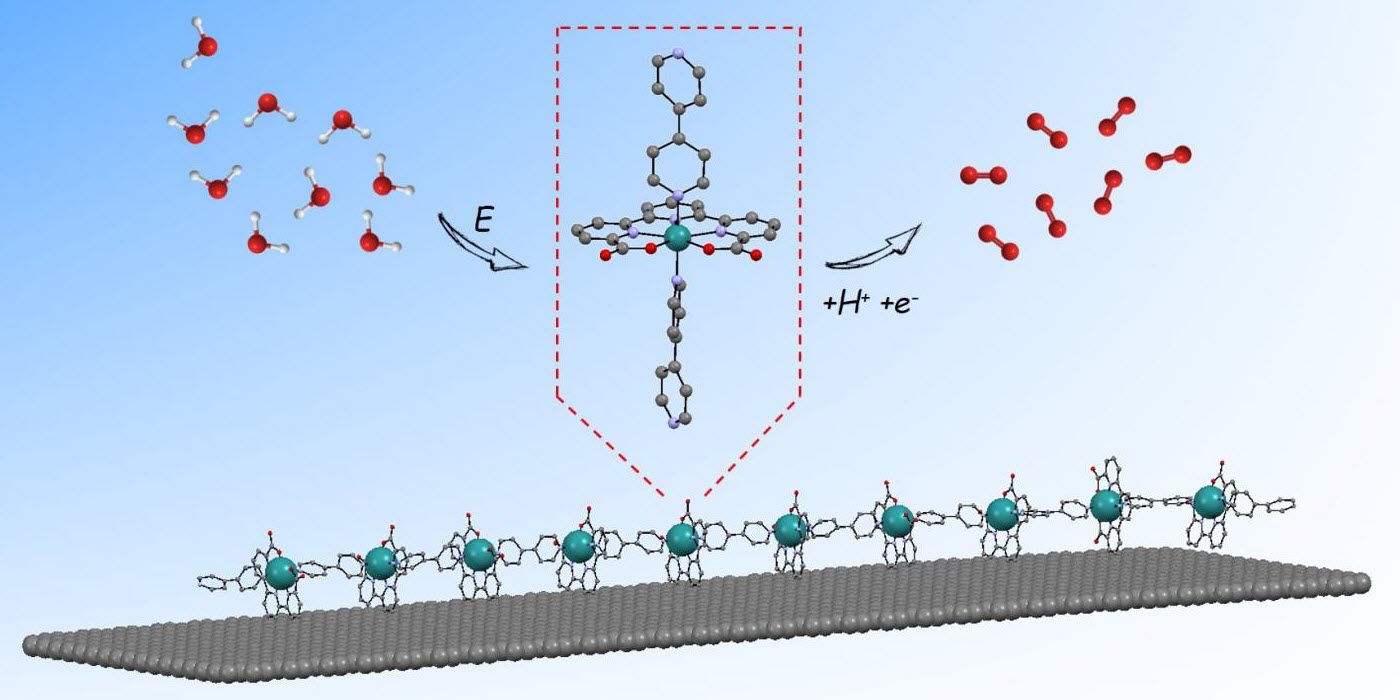 Researchers from the Llobet group at the Institute of Chemical Research of Catalonia (ICIQ) have developed a new molecular material made out of oligomers and used it as a catalyst in water oxidation, achieving unprecedented current densities for molecular catalysts. The paper, "Water oxidation electrocatalysis using ruthenium coordination oligomers adsorbed on multiwalled carbon nanotubes," has been published in Nature Chemistry.

The generation of electro-anodes and cathodes for water splitting devices based on molecular complexes anchored onto solid surfaces is gaining traction thanks to their versatile and modular properties through ligand design. After studying the catalytic behavior of oligomers of general formula {[Ru(tda)(4,4'- bpy)]n(4,4'-bpy)} (where n is 1, 2, 4, 5 or 15), the scientists from ICIQ's Llobet team set out to anchor them onto graphitic surfaces. "We decided to design an oligomeric material based on our powerful Ru(tda) catalyst to move from homogeneous to heterogeneous applications. We had to anchor the catalyst on a surface to find a tangible application on water-splitting devices," explains Marcos Gil-Sepulcre, postdoctoral researcher and group coordinator at the Llobet group and first co-author of the paper.

In collaboration with international partners such as Johannes Elemans at the Institute for Molecules and Materials Radboud University and Christina Scheu at the Max-Planck-Institut für Eisenforschung GmbH in Düsseldorf, the scientists carried out multiple microscopy studies to characterize the hybrid materials. In addition, Grazing-incidence small-angle X-ray scattering (GIWAXS) was carried out at the Alba synchrotron by Marc Malfois and Eduardo Solano. Further, Density-functional theory (DFT) calculations, conducted by the ICIQ Maseras group, to explore the nature of the interaction between the oligomers and the graphitic surfaces. X-ray absorption spectroscopic (XAS) measurements were also employed, in collaboration with the group of D. Moonshiram at IMDEA Nanociencia, to analyze the oligomers at the graphitic surfaces, and evaluate their fate during and after catalysis. This way the researchers confirmed the molecular nature of the oligomer and found out that it is adsorbed to the graphitic surface via aromatic catalyst-surface C-H-π interactions—an anchoring strategy that has never been described for molecular catalysts up to now.

A single monomer of the oligomer employed is unable to anchor because its interactions with the surface are too weak. Finding strength in numbers, once multiple units are introduced, the large number of C-H-π interactions stabilise the whole chain. The conformation of the hybrid material (a nanotube surrounded by oligomers) is the reason behind its high efficiency: all the ruthenium atoms in the oligomers are active catalytic centers—as opposed to dumping tones of oxides on electrodes as usually done in material science.

The resulting hybrid molecular material behaves as a rugged and powerful electro-anode for the water oxidation reaction achieving unprecedented current densities for molecular catalysts in the whole range of pH, but especially at neutral pH. "To our knowledge, there's no coordination polymer, MOF or COF, or organometallic material that works under neutral conditions, gives these currents and is stable," claims Gil-Sepulcre.

The work provides the basis for designing robust and efficient hybrid molecular electro-anode materials for the oxidation of water-based on Ru complexes, that can be extended to other transition metals and other catalytic reactions. The team is already working on implementing the hybrid material on photoelectrochemical cells to test its applications in a water-splitting device.

- This press release was originally published on the ICIQ website