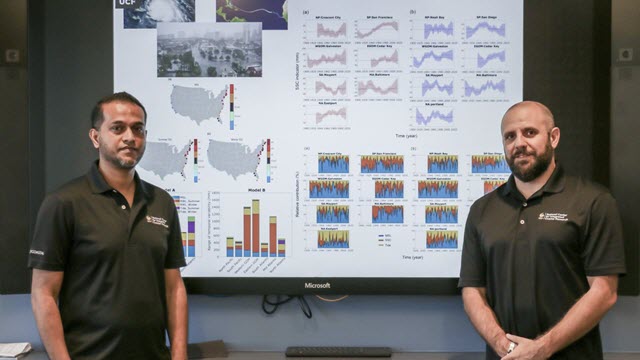 Sometimes to understand the present, it takes looking to the past. That's the approach University of Central Florida coastal researchers are taking to pinpoint the causes of extreme sea level changes.

Using historical data from tide gauges that line US coasts, the researchers created an extreme sea level indicator that identifies how much of a role different major weather and ocean forces have played in affecting extreme sea levels in coastal areas around the country.

They published their latest findings today in the journal Nature Scientific Data. The researchers hope that further development of the indicator may one day allow scientists to predict when and where extreme sea level changes will occur.

"What this indicator does, which other indicators do not show, is how weather and climate forces interact with predictable tides to make up high sea levels that can be potentially dangerous," says Thomas Wahl, an assistant professor in UCF's Department of Civil, Environmental and Construction Engineering, a member of UCF's National Center for Integrated Coastal Research and study co-author.

Extreme sea level change, in the context of this study, is when the likelihood for water level thresholds to be exceeded is higher or lower than under normal conditions. This can have a devastating effect on coastlines, where 40 percent of the US population lives, or more than 126 million people.

Low-frequency tides are higher than average tides that roll in only every so often, such as every 18.6 or every 4.4 years. Average sea level changes each year and can be affected by forces like the El Niño-Southern Oscillation. Storm surges occur from hurricanes and nor'easters.

For Florida's Gulf Coast, such as at Cedar Key, mean sea level and storm surges have been the most responsible for creating periods where extreme sea level events tended to be higher or more frequent, the indicator shows. For the South Atlantic coast, including Jacksonville, Florida, mean sea level and low frequency tides have had a greater effect than variations in storm surges.

This is in stark contrast to the North Atlantic coast, such as Portland, Maine, where low frequency tides have had a greater influence on extreme sea levels than variations in mean sea level or storm surges, especially in the summer.

"Hopefully, at some point such information can help guide the development of sustainable coastal adaptation plans," Rashid says.