WINNIPEG, Dec. 18, 2017 — Lakes suffering from harmful algal blooms may not respond to reduced, or even discontinued, artificial nitrogen loading. Many blue-green algae responsible for algal blooms can fix atmospheric nitrogen dissolved in the water, and therefore water stewards should focus their efforts on removing phosphorus from lakes to combat algal blooms. 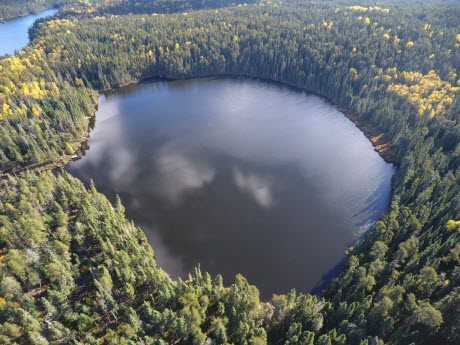 However, 40 years ago, researchers began reducing the amount of nitrogen they were adding to the lake, and from 1990-2013, they cut artificial nitrogen loading to zero. Despite these dramatic cuts in nitrogen loading algal blooms continued to cover the lake.

"We have been researching the role of artificial nitrogen in algal blooms for almost 50 years now, and these latest results clearly demonstrate that ceasing nitrogen loading into lakes has little effect on the size or duration of algal blooms," said Dr. Scott Higgins, research scientist at IISD Experimental Lakes Area and lead author on the paper.

"A number of algal species can make up for nitrogen deficits by fixing atmospheric nitrogen that is dissolved in the water. What is clear here is that phosphorus is the key driver of algal blooms in lake environments," added Higgins.

These results have clear implications for policy geared towards reducing algal blooms—especially for jurisdictions dealing with limited budgets.

"When governments are tackling algal blooms while working with limited resources, these results demonstrate that their efforts should be firmly focused on reducing phosphorus loading in lakes," said Dr. Michael Paterson, senior research scientist at IISD Experimental Lakes Area, and secondary author on the paper.

Algal blooms are unsightly growths on water bodies that can produce toxins harmful to humans and animals, affect drinking water supplies, cause low oxygen 'dead zones' that result in fish kills, and a number of other negative consequences. Many freshwater lakes around the globe, including Lake Erie, Lake Winnipeg, and Lake Taihu, have suffered from algal blooms for decades.

Research at IISD Experimental Lakes Area, the world's freshwater laboratory, identified phosphorus as the leading cause of algal blooms in lakes back in the 1970s, in a groundbreaking experiment on a whole lake ecosystem.