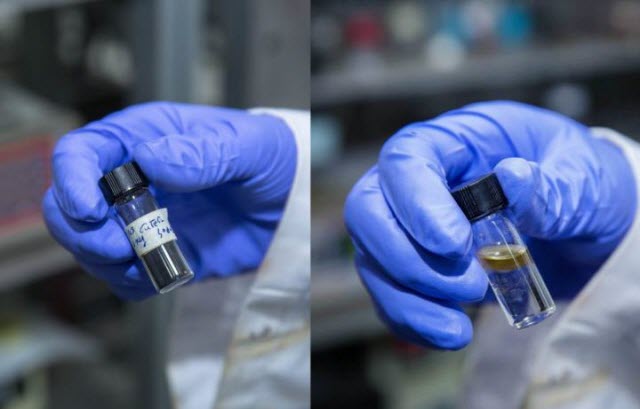 The sample on the left is the new delafossite-based catalyst used in the reaction between CO2 and H2 generated by solar water splitting. Shown on the right is diesel, produced by the reaction.Photo credit: UNIST

Climate change is one of the most serious threats facing the world today. With the effectuation of the Paris Agreement, there has been a rising interest on carbon capture and utilization (CCU).

A new study, led by professor Jae Sung Lee of Energy and Chemical Engineering at UNIST uncovers new ways to make biofuel from carbon dioxide (CO2), the most troublesome greenhouse gas. In their paper published in the journal Applied Catalysis B: Environmental, the team presented direct CO2 conversion to liquid transportation fuels by reacting with renewable hydrogen (H2) generated by solar water splitting.

The currently existing catalysts, used for the reactions of H2 with CO2 are limited mostly to low molecular weight substances, such as methane or methanol. Besides, due to the low value of these catalysts, the reduction effects of CO2 is generally low. However, the new delafossite-based catalyst, presented by UNIST research team converts CO2 into liquid hydrocarbon-based fuels (e.g., diesel fuel) in one single step. These fuel samples can be, then, used by existing diesel vehicles, like trucks and buses.

This new delafossite-based catalyst, composed of inexpensive, earth-abundant copper and steel is used in a reaction between CO2 emissions of industrial plants and H2 generated from solar hydrogen plant to produce diesel.

"Diesel fuels have longer chain of carbon and hydrogen atoms, compared to mathanol and methane," says Yo Han Choi, the first author of the research. "Using delafossite-CuFeO2 as the catalyst precursor, we can create longer carbon chains and this would allow for the production of diesel."

The benefits are two-fold: The process removes harmful CO2 from the atmosphere, and the diesel can be used as an alternative fuel to gasoline. The research team expects that this breakthrough holds a potential to revolutionize the automobile industry, thereby bringing us a step closer to eliminating greenhouse gas.

"We believe the new catalyst breaks through the limitation of CO2-based FT synthesis and will open the avenue for new opportunity for recycling CO2 into valuable fuels and chemicals," says Professor Lee.