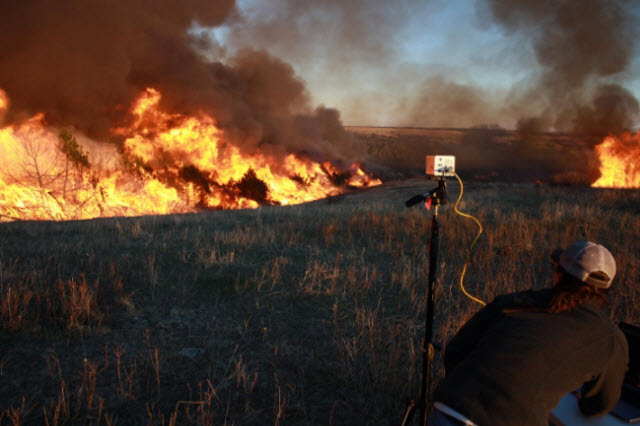 Ecologist Dirac Twidwell wants to change the way we think about prescribed burns.

The University of Nebraska professor says he can harness extreme fire to restore grasslands on the Great Plains—and, with the help of the Nebraska Intelligent MoBile Unmanned Systems (NIMBUS) Lab, he has created a small drone that launches ping-pong balls-sized "dragon eggs" of fire to help him do it safely and cheaply. The two-pound hexacopter could be used to aid in wildfire suppression as well as to ignite prescribed burns for management of wildlands and rangeland, he says, taking on dangerous jobs currently carried out by helicopter pilots and ground crews.

Related Article: Why Ecologists Are Advising an Increase in Prescribed Grassland Burning

In an article published today (1 August 2016) in Frontiers in Ecology and the Environment, Twidwell and colleagues review the use of unmanned aerial systems (UAS) in fire management.

Twidwell will speak more broadly about innovations in fire management and his experiments across the Great Plains with high intensity fires during severe drought on Friday, 12 August 2016 at the 101st Annual Meeting of the Ecological Society of America in Fort Lauderdale, Florida. 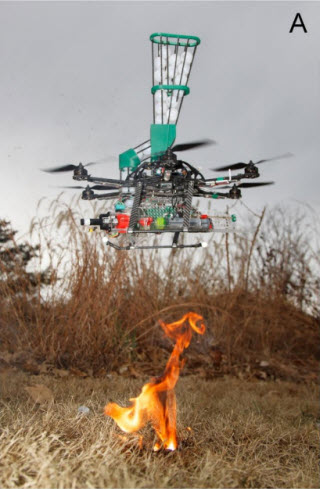 This is a UAS prototype for fire ignitions, from figure 4 of Twidwell D et al (2016) Front Ecol Environ 14(6): 333-339.ESA"Nobody is really studying high intensity fire, because everyone would think you are crazy. We have always been told that high intensity fires during drought are bad. That's the problem: we have been studying fire when we were told it is OK to ignite and control fires on landscapes. To me, it's a job for scientists to do. If we are going to understand the role of fire in nature, we need to study a bigger range of intensities, and we need new approaches to do it," said Twidwell.

Fire shaped the prairie ecosystem of the Great Plains. Historically, fires naturally ignited by lightning swept regularly through the grasslands, killing off the seedlings of trees and shrubs and promoting the dominance of fast-germinating native grasses, which are adapted to frequent fire. Fire releases nutrients that fuel more vibrant regrowth, a pattern recognized by native peoples who set grass fires to improve browse for buffalo. Successful fire suppression has changed that scenario, allowing woody shrubs like juniper to gain a stubborn foothold. Like grasslands and savannas around the world, the Great Plains' grass sea is on a path to becoming a canopy of shrubs.

The shrub infiltration is a tricky problem for ranchers working to maintain quality grazing lands for their livestock and wildlife managers tasked with maintaining native habitat and ecosystem services. Both groups employ fire as a tool, sometimes working together to set the prairie ablaze under controlled conditions and regenerate the grasses. As in western forests, regular prescribed fires on grasslands also prevent the buildup of fuels that can enkindle large out-of-control wildfires. But typical prescribed burning conditions have disappointed land manager's hopes for invasive species control. They have not stopped the advance of the woody shrubs, leaving some to resort to slower and more expensive removal with bulldozers and herbicide.

"It's because we we're not burning hot enough," said Twidwell. His experiments with high intensity fires under drought conditions in Texas demonstrated that the resilient shrubs can be killed with fire.

"We used to say we couldn't kill juniper after they grew to about 6 feet. That belief really effected policy. It's not true," Twidwell said.

The problem, Twidwell says, is that low-intensity prescribed burns do not mimic natural fire conditions. Prescribed burns are usually undertaken under mild weather conditions when temperatures are cool, winds are gentle and steady, humidity is moderate, and soil and fuels are moist with recent rain. Concerns about plant stress, regrowth and erosion are part of this equation, as well at the safety of ground crews and fire containment. But more fires burned historically when the weather was hot, during drought or when winds were high.

"'Extreme fire' is a technical term used in fire science since the 1950s. It describes a fire that exhibits blowups and firestorms and other erratic and nonlinear behavior," said Twidwell. "These are the kind of fires we get in the summer, under drought conditions—these conditions are natural and, we think, an important reason for the absence of trees in many grasslands historically."

He conducted experimental high-intensity burns in Texas at a humid subtropical site near Corpus Christi and a semi-arid site on the Edwards Plateau, about 200 miles west of Austin, during one of the most severe droughts recorded for the region. Intense fire burned through the juniper canopy. Dry soil also favored reestablishment of fire-adapted grasses post-fire, likely limiting the capacity of the shrubs to resprout from underground buds.

Further experiments in Nebraska's Sandhills demonstrated that grass recovers quickly after extreme fire. Two years after burning, the plots had no striking bald or eroding patches and could not be distinguished from plots that had not burned.

"In grasslands of the Great Plains, fire is a stabilizing force," Twidwell said.

To prevent experimental fires from running wild, Twidwell and his team calculated the maximum distance  embers could jump to kindle a new fire based on ember transport models used in forest fire fighting. They created firebreaks much larger than the predicted distance, up to 450 meters (about 5 football fields) wide, downwind of their experiment. He believes his experiments could be safely replicated for conservation applications. Some ranchers with large acreages who use fire regularly and intensively are already applying the necessary principals to manage the perimeter of their land and burn the interior.

"I'm not advocating that people should do it," Twidwell cautioned. "It is my job as a scientist to explain how the ecosystem functioned in the past and how we have changed it. If we want certain things from ecosystems, we need to understand how they worked."

Technical innovations can lower costs and keep ground crews at a safer distance from the firefront. That's where the drone comes in. The idea originated as joke floated over coffee with co-author Craig Allen, a researcher with the U.S. Geological Survey's Nebraska Cooperative Fish and Wildlife Research Unit. But after laughing about it, they realized it could have real benefits.

The U.S Forest Service has already pressed UASs into service to monitor large wildfires in the West. With more than 50 percent of the Forest Service budget now committed to wildfire management, new solutions are critical. UASs save money and lower risks for personnel. Using the drone's electo-optical camera eyes, drone pilots can peer through smoke that human eyes can't penetrate, measure heat intensity, and locate natural fire breaks and water resources. Drones can be fitted with air quality and weather monitoring equipment and carry radio relays or cellular transmission into remote areas where service is spotty.

Round-the-clock drone monitoring of the California Rim Fire in 2013 helped firefighters map the spread of the fire, taking the load off of helicopter pilots. With the drones watching for new ignitions from flying sparks, the fire management officers had better information to efficiently distribute personnel and resources and respond quickly to changing conditions.

Unmanned aerial craft also have great potential to help scientists learn about wildfires in action by tracking fires as they burn across a landscape and collecting data that would be difficult to obtain from the ground.

"In grassland ecosystems we are really data-poor in terms of fire behavior. We need finer scale spatial data and a lot of it to understand the effects of fire on ecosystems and we just haven't had the technology to capture it," said Twidwell. "Understanding the spatial context and intensity of fires matters whether your goal is to protect a house or restore a grassland ecosystem."

Twidwell and his colleagues carried out two field trials in Nebraska with the prototype, first with 60 enthusiastic volunteers from the Loess Canyon Rangeland Alliance, a landowner burning cooperative, and a second with the National Park Service at Homestead National Monument.

"They managed the boundary and let us do drops in the interior to test the technology. It was small, about 20 acres, and a nice opportunity, in a controlled setting, to work together testing the idea."

The operators from the NIMBUS lab are licensed pilots and obtained authorization to conduct the test flights and burns. They flew the prototype within 100 meters and in sight of the pilot for the ignition experiments, in part due to Federal Aviation Administration regulations.

Twidwell says he is already fielding requests from private landowners and agency land managers who want their own drone. He believes that expanding the use of UASs in fire management, whether for monitoring or for ignitions, will require more innovation in regulation and governance than in technology. He is calling on the fire management community to question old dogmas and self-imposed constraints.

"It's not like we have infinite people and money to throw at this challenge."

The Ecological Society of America, founded in 1915, is the world's largest community of professional ecologists and a trusted source of ecological knowledge, committed to advancing the understanding of life on Earth. The 10,000 member Society publishes six journals and a membership bulletin and broadly shares ecological information through policy, media outreach, and education initiatives. The Society's Annual Meeting attracts 4,000 attendees and features the most recent advances in ecological science. Visit the ESA website at http://www.esa.org.