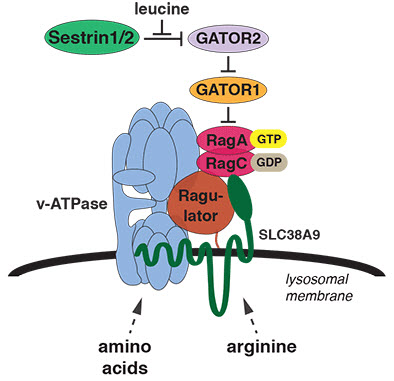 This schematic shows how amino acid inputs arising from multiple sensors in distinct cellular compartments impinge on the Rag GTPases to control the activity of the growth-regulating mTORC1 pathway. The protein Sestrin2 (and likely Sestrin1) binds leucine, disrupting an interaction between Sestrin2 and GATOR2, which in turn activates mTORC1.Image Courtesy of AAASCAMBRIDGE, Mass. – Whitehead Institute scientists have at last answered the long-standing question of how the growth-regulating pathway known as mechanistic target of rapamycin complex 1 (mTORC1) detects the presence of the amino acid leucine—itself a key player in modulating muscle growth, appetite, and insulin secretion.

Through a series of protein-mediated signals, mTORC1 interprets cues in the cellular environment, including nutrient availability, and instructs the organism to react accordingly. mTORC1 is apt to trigger growth during abundant times and slow metabolism when food is limited. Over the past several years, researchers in the lab of Whitehead Member David Sabatini have been identifying the many key components of the pathway—whose deregulation is associated with diseases ranging from diabetes to cancer to epilepsy—moving ever closer to finding precisely how mTORC1 actually senses the presence of amino acids.

Earlier this year, Sabatini’s group identified the transmembrane protein SLC38A9 as a putative sensor for arginine, but the sensor for leucine had remained elusive. Now, however, the lab has discovered that Sestrin2—one of a three-member protein family Sabatini previously implicated in amino acid detection—is a highly specific leucine sensor. The finding is reported online this week in the journal Science.

Related article: Scientists Unlock Mystery of How the 22nd Amino Acid is Produced

“We finally have the sensor,” says Rachel Wolfson, a graduate student in the Sabatini lab and co-first author of the Science paper. “We’ve always wanted to find it because we’ve known that leucine is one of the most important amino acids for the (mTORC1) pathway.”

Wolfson and co-first author Lynne Chantranupong, both of whom were involved in the earlier Sestrin research, found that in the absence of amino acids, Sestrin2 interacts with a protein complex known as GATOR2 to inhibit the mTORC1 pathway, thereby reducing cell growth. They then discovered that leucine binds directly to Sestrin2, disrupting the interaction and activating the mTORC1 pathway.

“This was a big surprise for us, that there’s an amino acid interaction with GATOR2 that’s specific for leucine,” says Chantranupong, also a graduate student in Sabatini’s lab. “This is the first instance of a sensor for leucine, and there may be ways we might be able to take advantage of Sestrin2’s leucine binding properties.”

Indeed, the finding suggests that it may be possible to design drugs that emulate leucine’s binding effects to either inhibit mTORC1 activity—which could be beneficial in treating diseases of aging—or upregulate it, which could potentially treat muscle atrophy and disease-related weight loss. Sabatini notes that current drugs that suppress mTORC1, such as rapamycin, act non-selectively on the broader mTOR pathway, which comprises not only mTORC1 but also a second complex known as mTORC2. Such broad inhibition introduces a variety of unwanted side effects.

“The field has been fixated on inhibiting mTOR, but it’s possible that drugs could be designed to avoid the danger of over-inhibiting the pathway,” Sabatini says.