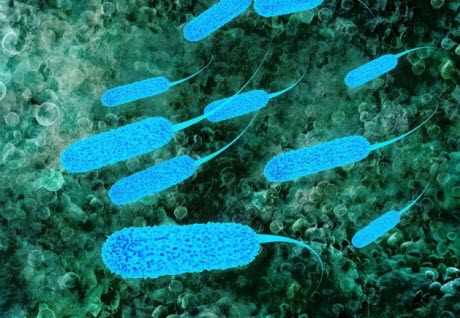 The rod-shaped bacterium E. coli served as the model system for DNA repair in the study. Photo courtesy of the U.S. Department of DefenseBLOOMINGTON, Ind. -- A study led by Indiana University biologist Patricia Foster and colleagues has found that forces in the external environment and oxidation are the greatest threats to an organism’s ability to repair damage to its own DNA.

The results, based on the first comprehensive, whole genome analysis of spontaneous mutation in the bacterium Escherichia coli, are reported today in the journal of the Proceedings of the National Academy of Sciences. Haixu Tang, an associate professor at the IU Bloomington School of Informatics and Computing, is also an author on the paper.

"Our study investigated 11 DNA repair pathways previously identified as resulting in spontaneous mutations," said Foster, a professor in the IU Bloomington College of Arts and Sciences’ Department of Biology. "The striking result was that only loss of the ability to prevent or repair oxidative DNA damage significantly impacted mutation rates. ... All other forms of DNA damage arising within the organism did not disturb the overall accuracy of DNA replication in normally growing cells.

"These results suggest that DNA repair pathways may exist primarily to defend against externally induced damage to the genome," she said.

E. coli, a bacterium found in mammalian digestive tracts and more commonly known as a source of food poisoning, was selected for the research since the biological pathways that control DNA repair have changed little as more complex organisms evolved, increasing the chances that the study’s results are applicable to higher forms of life, including humans. 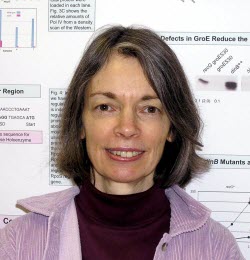 Patricia FosterPhoto courtesy of Indiana UniversityFoster's lab previously traced changes in E. coli’s complete genome over the course of 200,000 generations, creating the world’s most comprehensive picture of genetic mutation in the species.

To focus their investigation on the relative importance of the pathways that repair DNA damage to genetic mutation, the IU team concentrated on 11 processes identified in other studies as causing mutation when deactivated. The pathways were isolated using 11 different strains of E. coli, each defective for one of the specific pathways.

The DNA repair pathways under investigation fell into three broad categories: the activities of error-prone DNA polymerases, repair of internally induced DNA damage, including oxidation; and repair of DNA damage due to external agents. Each pathway is more or less specific for a given type of DNA damage.

External agents are forces that affect DNA, such as ultraviolet and other radiation, and chemical compounds such as industrial pollutants and platinum-based compounds such as cisplatin, a chemotherapy drug. Internal agents that damage DNA are produced by the body’s own normal processes. Oxidation occurs in the body as a result of metabolic processes that use oxygen, creating molecules known as "free radicals" that steal electrons from other molecules in the body, causing damage. DNA oxidation has been linked to many types of cancers, and even aging.

The IU scientists used whole genome sequencing to catalog the specific genetic changes that resulted from loss of each repair pathway.

Foster said that, surprisingly, the IU team found that none of the pathways resulted in mutations except the ones that deal with damage from oxidation. This means that the other types of damage–from either internal or external causes–are not a great threat to normally growing cells.

These pathways may be important, however, when cells are exposed to external agents or other forms of stress.

The more complete picture of genetic mutation–made possible by the IU team's previous documentation of the bacterium's evolution over 200,000 generations–is likely responsible for the difference in the study’s results compared to previous research implicating all 11 DNA repair pathways in genetic mutation, Foster said.

"Previous studies on mutational processes have relied on reporter genes"–single genes that signal larger changes across the genome–"to detect mutations, and these may not be representative of the genome as a whole," she said. "While reporter genes can reveal important mutational processes that occur at particular spots in the DNA, when the whole genome is the target, these localized errors don’t appear to contribute to overall mutation."

Next, Foster plans to investigate DNA repair functions in cells under stress–such as those starved of nutrients or undergoing other changes in metabolism–which may provide a more complete model for mutational processes in living human cells, which exist in different states and environments throughout the body.

"Since DNA repair is essentially the same in higher organisms as bacteria, these experiments may help us understand the importance of these functions in our own bodies," she said.

Other authors are Ellen Popodi, an assistant scientist, and Jesse Townes, a research associate, in the IU Bloomington Department of Biology, and Heewook Lee, a recent Ph.D. graduate of the School of Informatics and Computing.

This research was funded by the U.S. Army Research Office, as part of the U.S. Department of Defense Multidisciplinary University Research Initiative program.