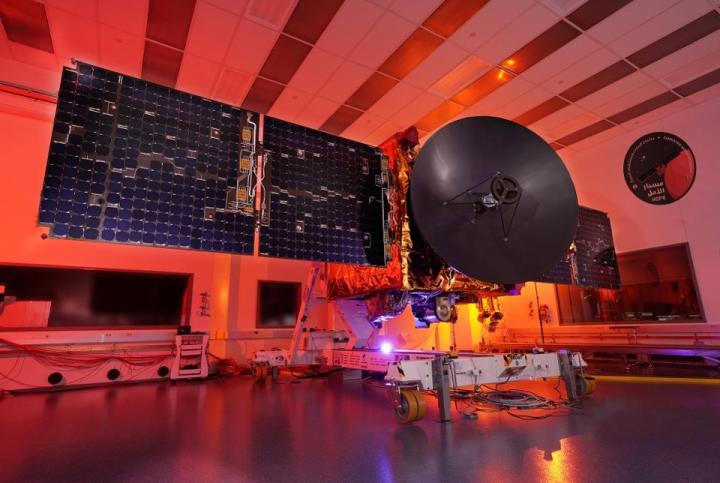 The Emirates Mars Mission Hope Spacecraft prior to shipment to Dubai and the Tanegashima launch site, with fully deployed solar panels and instruments visible (facing the floor) measuring nearly five meters across.
MBRSC/CU-LASP

The first mission ever launched by the Arab world into our solar system, the Emirates Mars Mission 'Hope' orbiter is expected to lift off in July (exact launch date depends on weather conditions) on an H-IIA rocket from Tanegashima, Japan. The spacecraft, which is about the size of a small car, was constructed at the Laboratory for Atmospheric and Space Physics (LASP) at the University of Colorado, Boulder by a joint MBRSC/LASP team led by project director Omran Sharaf from MBRSC and deputy program manager and science lead investigator Her Excellency Sarah Al Amiri. The overall team working on the Mission comprises some 200 staff from MBRSC, 150 from LASP and 100 from other partners around the world, including NAU.

The probe, designed to advance scientific understanding of the red planet's atmosphere, will arrive at its destination in February 2021 and will spend two years collecting images and data. Hope's unique orbit will enable the spacecraft to provide a weather-satellite style view of the Martian atmosphere with near-complete daily geographic coverage.

The mission's scientific goals are to use three scientific instruments on board the probe to create the first holistic picture of the Martian atmosphere, which will give scientists deeper insight into the past and future of our own planet as well as the potential of life for humans on Mars and other distant planets. The Hope mission also supports several key goals of NASA's Mars Exploration Program Analysis Group related to preparing for human exploration of Mars.

Edwards, assistant professor in NAU's Department of Astronomy and Planetary Science, and Regents' professor and program manager Philip Christensen of ASU's School of Earth and Space Exploration worked with engineers at MBRSC and ASU to develop the Emirates Mars Infrared Spectrometer (EMIRS). EMIRS is an interferometric thermal infrared spectrometer designed to provide a unique view of the lower and middle atmosphere of the planet, measuring the distribution of dust particles and ice clouds while tracking the movement of water vapor and heat through the atmosphere. The other scientific instruments onboard the orbiter are a multi-band camera (Emirates eXploration Imager) and a far-ultraviolet imaging spectrograph (Emirates Mars Ultraviolet Spectrometer). 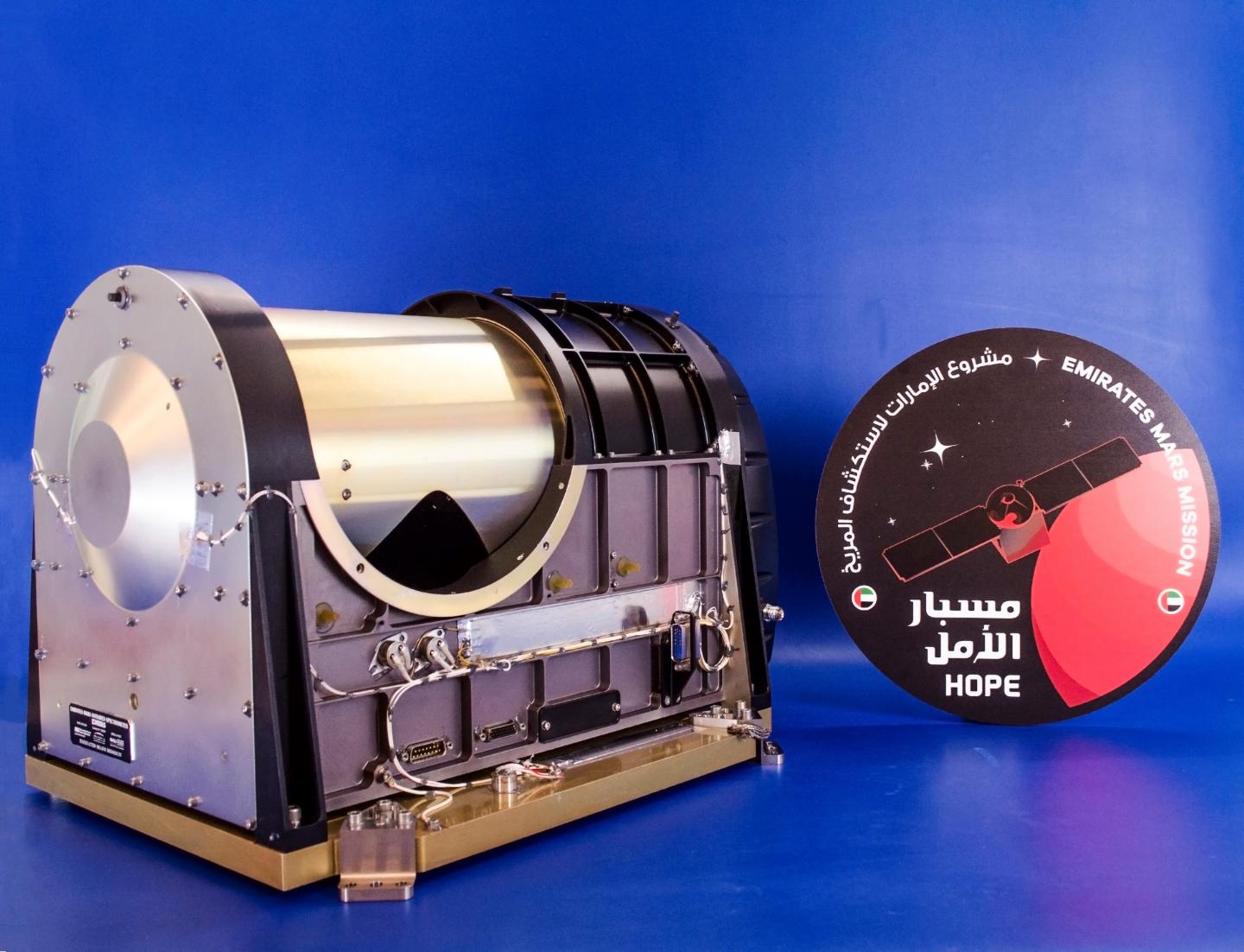 The Emirates Mars Infrared Spectrometer prior to integration on the Hope orbiter.
MBRSC/ASU/NAU

Edwards' role on the project is that of an instrument scientist. "What that basically means is that I provided the link between the engineering and the science, so I looked at the instrument's capabilities and performance and tried to understand how they would meet the mission's science goals. This was complicated because of all the trade-offs that needed to be made, for example, sacrificing spectral resolution for spatial coverage. I worked as an integral part of the ASU team, helping to shepherd the development process from concept to design to fabrication, assembly, test and integration onto the spacecraft."

The mission's name, Hope, was chosen to send a message of optimism to millions of young Arabs, according to Sheikh Mohammed bin Rashid Al Maktoum, the ruler of the Emirate of Dubai for whom MBRSC is named. The resulting mission data aims to make major advances in our understanding of the Martian climate system and will be shared freely online with more than 200 institutions worldwide.

"Collaboration and knowledge transfer have been key to the development of the Emirates Mars Mission," said Sharaf. "Our partners at ASU and NAU have been key to ensuring the success of the mission, delivering an extraordinary instrument in almost half the time of conventional missions but also in providing the resources and knowledge we need to drive our own development of space systems engineering and planetary science."

Mission helps train next generation of UAE engineers and scientists 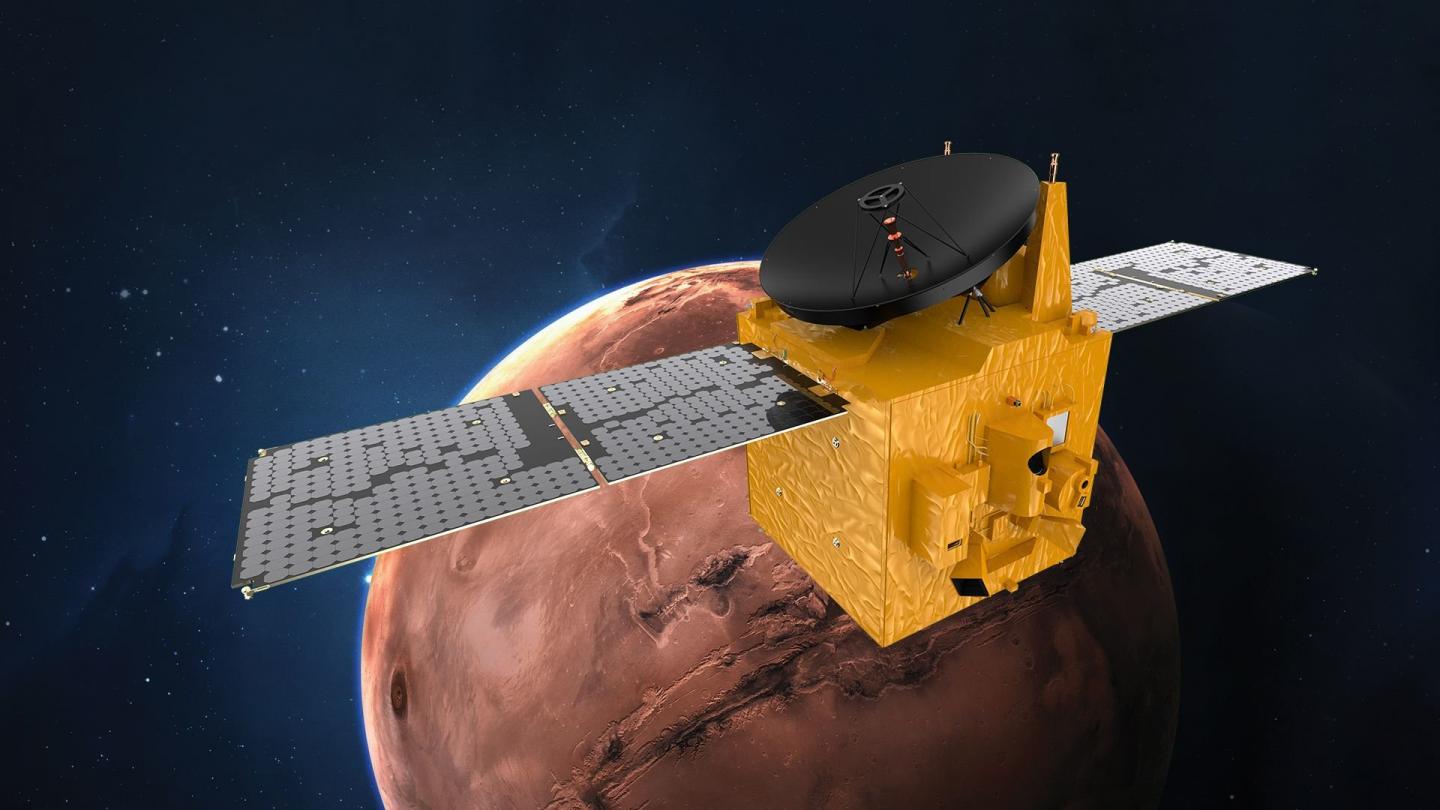 An artist's impression of the United Arab Emirates' Hope spacecraft in orbit around Mars, where it will arrive in February 2021 after launching from Japan.
MBRSC

"It has been a wonderful experience to work with the UAE team on this unique international partnership," said Christensen, a planetary scientist. "Only a very small number of nations have sent missions to Mars, and it is a real honor for ASU to have been invited to participate in this exciting adventure."

"The science enabled by the Emirates Mars Mission will be second to none, but the goals of the mission don't stop there," said Edwards. "The collaboration developed through this project has helped train the next generation of engineers and scientists in the UAE through professional and student opportunities. It's been an amazing experience and has cultivated life-long colleagues and friendships that will endure beyond the Hope Mission to Mars."

Edwards is a participating scientist on the Mars Science Laboratory Curiosity Rover (MSL). He has worked on numerous other Mars missions including the 2001 Mars Odyssey Thermal Emission Imaging System (THEMIS), Mars Global Surveyor Thermal Emission Spectrometer (TES) and the Mars Exploration Rovers Mini-Thermal Emission Spectrometer (Mini-TES). A major element of his research has been the design and development of infrared remote sensing instruments for use in space, the laboratory and for fieldwork. His research uses infrared spectroscopy, radiometry, laboratory spectroscopic measurements, geologic field observations, and numerical modeling.

The Emirates Mars Mission 'Hope' launch is currently on a weather hold with the next opportunity scheduled for Thursday, July 16 at 1:43 p.m. PDT. Visit http://www.emm.ae/live for updates to the launch status.