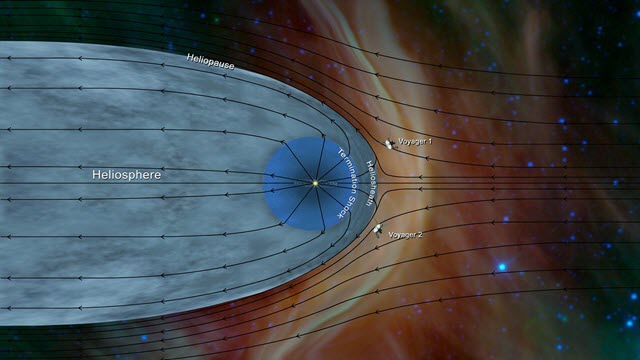 Iowa physicists have confirmed the spacecraft Voyager 2 has entered interstellar space, in effect leaving the solar system. Data from Voyager 2 has helped further characterize the structure of the heliosphere, structure of the heliosphere—the wind sock-shaped region created by the sun's wind as it extends to the boundary of the solar system.Credit: NASA JPL

Voyager 1 has a companion in the realm of the stars.

Researchers at the University of Iowa report that the spacecraft Voyager 2 has entered the interstellar medium (ISM), the region of space outside the bubble-shaped boundary produced by wind streaming outward from the sun. Voyager 2, thus, becomes the second human-made object to journey out of our sun's influence, following Voyager 1's solar exit in 2012.

In a new study, the researchers confirm Voyager 2's passage on Nov. 5, 2018, into the ISM by noting a definitive jump in plasma density detected by an Iowa-led plasma wave instrument on the spacecraft. The marked increase in plasma density is evidence of Voyager 2 journeying from the hot, lower-density plasma characteristic of the solar wind to the cool, higher-density plasma of interstellar space. It's also similar to the plasma density jump experienced by Voyager 1 when it crossed into interstellar space.

"In a historical sense, the old idea that the solar wind will just be gradually whittled away as you go further into interstellar space is simply not true," says Iowa's Don Gurnett, corresponding author on the study, published in the journal Nature Astronomy. "We show with Voyager 2—and previously with Voyager 1—that there's a distinct boundary out there. It's just astonishing how fluids, including plasmas, form boundaries."

That gives valuable clues to the structure of the heliosphere—the bubble, shaped much like a wind sock, created by the sun's wind as it extends to the boundary of the solar system.

"It implies that the heliosphere is symmetric, at least at the two points where the Voyager spacecraft crossed," says Bill Kurth, University of Iowa research scientist and a co-author on the study. "That says that these two points on the surface are almost at the same distance."

"There's almost a spherical front to this," adds Gurnett. "It's like a blunt bullet."

Data from the Iowa instrument on Voyager 2 also gives additional clues to the thickness of the heliosheath, the outer region of the heliosphere and the point where the solar wind piles up against the approaching wind in interstellar space, which Gurnett likens to the effect of a snowplow on a city street.

The Iowa researchers say the heliosheath has varied thickness, based on data showing Voyager 1 sailed 10 AU farther than its twin to reach the heliopause, a boundary where the solar wind and the interstellar wind are in balance and considered the crossing point to interstellar space. Some had thought Voyager 2 would make that crossing first, based on models of the heliosphere.

"It's kind of like looking at an elephant with a microscope," Kurth says. "Two people go up to an elephant with a microscope, and they come up with two different measurements. You have no idea what's going on in between. What the models do is try to take information that we have from those two points and what we've learned through the flight and put together a global model of the heliosphere that matches those observations."

The last measurement obtained from Voyager 1 was when the spacecraft was at 146 AU, or more than 13.5 billion miles from the sun. The plasma wave instrument is recording that the plasma density is rising, in data feeds from a spacecraft now so far away that it takes more than 19 hours for information to travel from the spacecraft to Earth.

"The two Voyagers will outlast Earth," Kurth says. "They're in their own orbits around the galaxy for five billion years or longer. And the probability of them running into anything is almost zero."

"They might look a little worn by then," Gurnett adds with a smile.

The Iowa study is one of five papers on Voyager 2 published in Nature Astronomy. These papers confirm the passage of Voyager 2 to interstellar space and provide details on the characteristics of the heliopause.