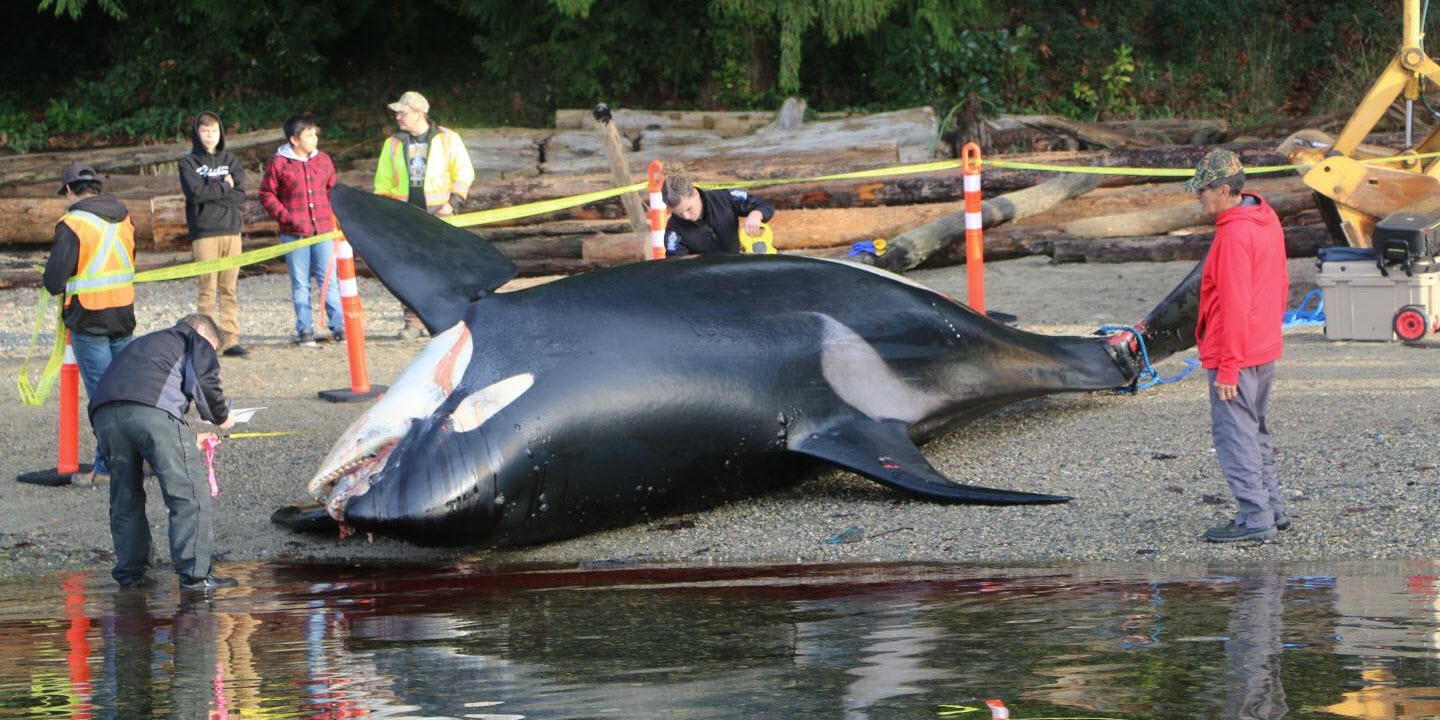 An 18-year-old male southern resident killer whale stranded near Sechelt, British Columbia on December 21, 2016. Postmortem examination suggested he died from trauma consistent with vessel strike. Other cases of vessel strike were identified in this study, while an earlier study by Williams and O'Hara (2010) identified 10 killer whales struck by boats between 1995 and 2005. This suggests that vessel strike may be an under-appreciated but important threat to killer whales in the eastern Pacific.
Paul Cottrell, Fisheries and Oceans Canada

Pathology reports on more than 50 killer whales stranded over nearly a decade in the northeast Pacific and Hawaii show that orcas face a variety of mortal threats—many stemming from human interactions.

A study analyzing the reports was published Dec. 2 in the journal PLOS ONE. The study findings indicate that understanding and being aware of each threat is critical for managing and conserving killer whale populations. It also presents a baseline understanding of orca health.

The study was conducted by a team of marine mammal and orca specialists led by the British Columbia Ministry of Agriculture and coordinated through the SeaDoc Society, a Washington-based program of the University of California, Davis' School of Veterinary Medicine. The lead author, Dr. Stephen Raverty, and coauthor, Dr. John Ford, are adjunct professions at the University of British Columbia Institute of Oceans and Fisheries and Department of Zoology, respectively.

The whales include those from healthy populations as well as endangered species, such as the southern resident whales regularly sighted off the coasts of British Columbia, Washington, and Oregon.

Of 52 whales stranded between 2004 and 2013, causes of death were determined for 42 percent. For example, one calf died from sepsis following a halibut hook injury. Another starved from a congenital facial deformity. Two whales died from the blunt force trauma of vessel strikes. Additional causes of death include infectious disease and nutritional deficiencies.

Despite there being no singular common cause of death, the study found a common theme: Human-caused deaths occurred in every age class—from juveniles to subadults and adults.

"In British Columbia, we lost nine southern resident killer whales: two adults, two subadults, and one calf died from trauma; one was a confirmed propeller strike, with one adult and two subadults from suspected ship strikes," said lead author Stephen Raverty, a veterinarian pathologist with the BC Ministry of Agriculture and adjunct professor at UBC's Institute for the Oceans and Fisheries. "One of these iconic species passed away from an infection secondary to satellite tagging. Another death was due to natural causes and the other two undetermined. Half of the southern killer whale deaths identified in this study were caused by human interactions."

"Nobody likes to think we're directly harming animals," said co-author and SeaDoc Society Director Joe Gaydos, a wildlife veterinarian with the Karen C. Drayer Wildlife Health Center in the UC Davis School of Veterinary Medicine. "But it's important to realize that we're not just indirectly hurting them from things like lack of salmon, vessel disturbance, or legacy toxins. It's also vessel strikes and fish hooks. That humans are directly killing killer whales across all age classes is significant; it says we can do a better job."

In 2004, Raverty and Graydos co-developed a standardized killer whale necropsy protocol. Revised in 2014 with help from Judy St. Leger, a pathologist working for SeaWorld, this guide helped improve examinations of deceased whales.

"The results from systematic necropsies of dead killer whales in this review is unique and will establish critical baseline information to assess future mitigation efforts," Raverty said. "This work contributes to a better understanding of the impacts that ongoing human activities and environmental events have on killer whales."

The authors acknowledge the report is an incomplete picture of orca health and mortality. Necropsies can only be performed on whales found in an adequate state to receive them, and even then, the cause of death cannot always be determined. But the report offers one of the most comprehensive looks yet at the multitude of human and environmental threats affecting killer whales and can help inform strategies to better protect them.

- This press release was originally published on University of British Columbia News website. It has been edited for style