Gas chromatography (GC) has experienced significant changes over the past 40 years, some technology based and others driven by specific applications. “While hardware and software improvements have made acquiring and processing data easier and more reliable, columns remain the heart of GC systems,” says Jack Hubball, Ph.D., technical director at Quadrex Corporation (Woodbridge, CT), a manufacturer of capillary GC columns and a distributor of gas generators, portable GCs, and consumables.

Close to 200 individual GC stationary phases were characterized by the mid-1970s. The advent of bondable polyethylene glycol phases reduced the number of identifiable phases to approximately 15, but according to Dr. Hubball, “This was short lived.”

Today, the number of distinct phases has grown due to the specialization of methods in the environmental, pharmaceutical, and petrochemical industries; differentiation of stationary phases beyond the standard
chemistries; the realization that thick films exhibit different selectivity than does the same stationary phase at standard thickness; and the introduction of new materials such as ionic liquids.

“GC is a mature market,” observes Kory Kelly, GC productmanager at column specialist Phenomenex (Torrance, CA), “but with the economy being what it is, users are looking to do more with less, to optimize columns for higher performance.” 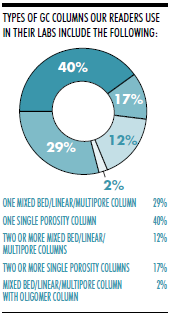 The main column characteristic providing longer life and better performance is chemical inertness with minimal column bleed. Columns that leak during the stationary phase result in noisy chromatograms, or in some cases a gummed-up detector. “Columns with good initial peak shape, high efficiency, and low bleed last longer,” Kelly says. “They can take more abuse while delivering performance that is equal to or better than lower-performing columns.”

Factors affecting low detection limits are, in order: detector, inlet parameters, and column capacity. The right detector can make an ordinary column look like an allstar; inlet parameters relate to how much analyte reaches the column. Innate capacity becomes problematic, particularly for dilute samples, as column diameters shrink from 1 mm ID to 0.50, 0.25, 0.18, and 0.10. Capacity is proportional to the column diameter and length, but it also depends on the thickness of the stationary phase. Some manufacturers have compensated for smaller IDs with a thicker stationary phase coating, but this affects the magnitude of chemical interactions between analytes and columns.

But what goes up must come down: Cycle times can only be shortened by rapidly cooling the column back to its standard operating temperature. For this, Kelly advises, chromatographers need to select their upper and lower temperatures judiciously. “Some columns take longer to cool than they do to heat up. Choosing the optimal temperatures can cut 25 percent or more off cooling time and significantly shorten the analysis.”

As with GC systems, what the marketplace is looking for from columns are “solutions,” says Chris English, manager for Restek Corporation’s (Bellefonte, PA) Innovations Lab. For columns, this means products related to and designed toward a specific method, e.g., pesticides. “Many manufacturers are building columns named after the intended application. The ‘solution’ consists of the column bundled with standards, an application note, plus hints not found in the official method but that users nevertheless need to get the method to work,” he explains.

This “secret sauce” consists of advice one might normally gain from experience, for example the length of a dry purge or the pros and cons of 1-microliter vs. 2-microliter injections. “Much of this information is not explicitly spelled out in the method,” English says.

“Solutions” need not be targeted to cutting-edge analysis. Most, in fact, address shortcomings in established methods. Restek’s Rtx®-CLPesticides and Rtx®-CLPesticides2 columns, for example, were developed for legacy pesticides, introduced decades ago, and their persistent degradation products. A lot of work continues as well on polyaromatic hydrocarbons, of interest to environmental and food safety, and the fluoranthenes, which are polyaromatic byproducts of burning coal and diesel.

While recognizing the desire for faster chromatography, English believes the trend will only go so far. “Not that many labs are going down to 100-micron ID columns because of the very high pressures involved. Plus their dynamic range is quite small and their calibration curves very short.” While 0.18-mm columns do provide faster separations, users may run up against scan speed issues when using a mass spectrometry (MS) detector. “A typical quadrupole MS should scan each peak at least eight times, which is why standard column diameters for this detection mode are 0.25 mm and higher.”

This discussion has so far been limited to capillary columns, but as English points out, packed columns are not going away anytime soon. “Many users don’t even know they’re still on the market.” Packed columns are ideal for large injections of liquids or gases in the petrochemical industry, or for back-flush applications. Many methods, such as ASTM 3606, for analyzing ethanol in gasoline, also call for packed columns.

For additional resources on GC Columns, including useful articles and a list of manufacturers, visit www.labmanager.com/gc