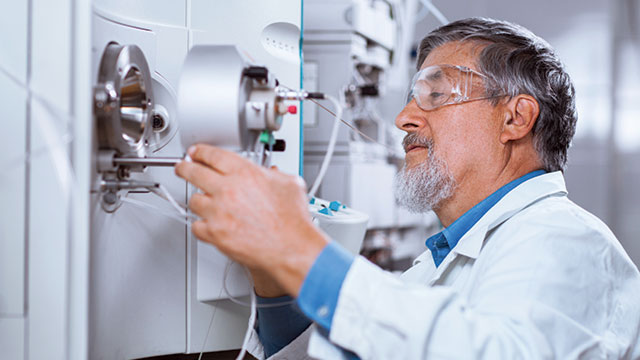 Although most chemists take classes in the theory of gas chromatography (GC), they learn operation and troubleshooting mostly through hands-on operation and laboratory lore. Thanks to the World Wide Web, online troubleshooting tips from vendors are available in seconds, without the need to find and dust off technical manuals.

Restek (Bellefonte, PA), for example, provides some of the best general-strategy rules for troubleshooting methodology:

Eric Denoyer, PhD, director of marketing, GC, and workflow automation solutions at Agilent Technologies (Santa Clara, CA), notes that GCs are complex but generally reliable systems. However, during a single GC analysis, a multiple-injection sequence, or an analysis of longer duration problems may arise in a number of areas, for example:

Denoyer notes that given all the possibilities for problems during a GC run or sequence, detectors generally contribute very few problems. However, two detector-related problems noted above stand out.

During the GC oven temperature program, the stationary phase on the column may slowly bleed off. “It may condense in the jet or actually burn, forming silicon dioxide, which slowly plugs the tip of the jet,” Denoyer says. This leads to slowly increasing back pressure on the end of the column, resulting in gradually decreasing column flow and increasing peak retention times. Eventually, as the jet becomes sufficiently plugged, the flame can blow out on solvent elution. “The time frame for the plugging to happen can be months, years, or decades, depending on column bleed and maximum column temperatures,” he says. The solution for this problem is regular FID jet maintenance. “Consider using a wider-bore jet for high-temperature applications or thick film columns,” Denoyer adds.

TCD baseline noise and spiking occur because the detector itself is susceptible to ambient pressure changes, which couple onto the TCD signal baseline and result in corresponding noise. “Even opening and closing a laboratory door can cause a large spike,” Denoyer notes. One strategy for overcoming this issue, at least on Agilent differential TCDs, is to install a small restrictor on the exit of the TCD, which isolates the internal TCD pressure from ambient pressure changes in the laboratory environment.

Diagnosing detector-related problems involves going through a series of steps:

Column-related problems manifest themselves in retention time shifts (usually to shorter times) and improper peak shapes—tailing, split, small, or wide peaks. “My first question in supporting a customer with these issues is, what is the previous versus present column performance?” says Martin Smith, GC project engineer at Shimadzu Scientific Instruments (Columbia, MD). “Is the problem acute or chronic? Is this a sudden symptom or has column performance deteriorated over time?”

Since GC columns are expensive, labs should consider reconditioning them until they no longer provide satisfactory performance. Periodic solvent washes or baking at high temperature are common regeneration methods that can add weeks or months to a column’s usable life.

Solvent rinses take more effort but can sometimes provide superior results. Supelco (Bellefonte, PA), Restek, and other vendors supply kits for column rinsing. Solvents may be drawn into or pushed through columns, but Smith prefers the former. “Pressurizing a glass vessel can create a glass grenade.” Column vendors also provide information on recommended pressures and solvents. Most stationary phases are cross-bonded and resistant to damage, but they may be compromised if the wrong solvent is used. Vendors will also specify volumes that will provide the cleanest possible column without removing the stationary phase.

Since the part of the column closest to the injector is by far the dirtiest, rinsing should always occur in reverse, from the detector end to the injector end, so as not to push contaminants through the cleaner region of the column. A bake-out with column carrier flow occurs after the solvent rinse to remove traces of solvent.

Innately dirty analyses abound. Smith mentions biodiesel and polychlorinated biphenyls in oil as common stock methods that can wreak havoc on a column. Note that some analytical methods specify solvents that are inherently unfriendly to stationary phases and essentially reduce column efficiency with each injection. In this case, solvent rinsing is unlikely to restore performance significantly.

“Miracles do happen, but typically rinsing and baking out amount to desperate measures to maintain a column in working order for a couple of weeks or months, but eventually you have to replace the column,” Smith says. “Whatever you do, the column will never again work like new.”

Smith notes that the common recommendation of clipping off one meter from both ends of a column may be too severe given the performance degradation resulting from shorter columns. “I lop off four inches at a time from the injector side instead, and keep injecting solvent to see if the contamination is gone. I’d rather keep column length as long as possible.”

For additional resources on GC troubleshooting, including useful articles and a list of manufacturers, visit www.labmanager.com/gc