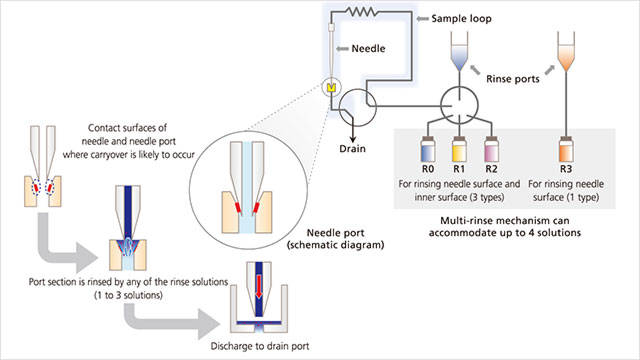 In a recent presentation, scientists from Waters (Milford, MA) defined HPLC carryover as “sample left over from a previous injection that may interfere or co-elute with analytes of interest, often interfering with accurate quantitation.” Carryover has always been a problem in HPLC, but its significance increases with today’s sensitive detection methods, specifically mass spectrometry (MS), as “carryover that would otherwise be undetected by UV [ultraviolet detection] will often be evident with mass detection.”

Carryover is one example of ghost peaks, which have always plagued chromatographers. Ghost peaks arise from impurities in the mobile phase, sample, or instrument. Mobile phase contamination is relatively easy to identify and correct: Inject pure mobile phase. If the ghost peak appears, investigate organic and aqueous phases independently.

Shimadzu (Columbia, MD), in collaboration with Daiichi Sankyo, has developed its line of Ghost Trap DS (for HPLC) and Ghost Trap DS-HP (for UHPLC), which, when installed between the gradient mixer and the autosampler in reverse-phase LC, traps mobile phase impurities.

Sample impurities are trickier to deal with. First, eliminate mobile phase as a source, then prepare the sample in a way that eliminates the undesired peak. When the impurity arises from target analyte degradation, the solution involves eliminating the degradation source (e.g., oxygen) or trying to understand the time course over which degradation occurs.

Instrument effects—principally carryover—are the most common source of ghost peaks. Carryover, particularly in this age of autoinjectors and highly parallel experimentation, may occur when sample components adhere to or adsorb onto the outside of the needle that aspirates sample from a vial or microwell. Highly absorbing materials are the worst offenders, as they may persist in subsequent chromatograms even after several blank injections, suggesting perhaps a nonexistent mobile phase issue.

According to Letter, “Most auto-injector valves rely on a rotary seal to move the sample from the needle loop to the flow path of the system. The components within these valves wear out and should be inspected at least every six months and replaced when needed.” Other things to look for are wear on the needle or needle seat, leaks, and a worn injector valve rotary seal. Worn seals allow sample retention between injections within spaces and grooves. “Additionally, buffer salts can lodge between the seals, causing leaks or carryover.”

Sample overloading is another common mistake chromatographers make, which can result in spurious peaks appearing out of nowhere and is related to proper maintenance. Overloaded columns leak sample, often unpredictably, over many injections. Gas chromatographers have the option of baking out the column at high temperature, replacing the guard column, or snipping a few centimeters off of a capillary column.

Letter recommends avoiding column overload by first undertaking a loading study to determine a column’s capacity for a particular sample and method, then flushing columns regularly. The wash method should employ a stronger-eluting solvent or buffer, typically one incorporating a gradient. Flushing is particularly important for isocratic methods, which tend to retain materials even when chromatographs appear pristine.

Technique and training are inseparable components of successful LC operation. According to Letter, “Good chromatography requires a complete understanding of the hardware used and the fundamentals of HPLC. You must be able to troubleshoot the complete flow path of the system and concepts of chromatography as used in method development. This is not a technique best learned by trial and error but rather through mentoring using logical steps.”

An operator’s ability to troubleshoot a carryover problem therefore reduces to the skill set they bring to HPLC. Letter stresses hands-on training, practical experience, and professional education on the actual instrument to be read, as a supplement to books and articles. “You will learn far faster this way and spend less time troubleshooting problems and more time running samples, accurately, in less overall time.”

Proper HPLC system maintenance is important for a variety of reasons, says Jennifer Simeone, principal scientist at Waters (Milford, MA), including the minimization of carryover. “LC systems contain parts that wear over time, including valves, needles, and fittings. Excessive wear or damage to any of these parts may lead to the creation of dead volumes where sample can remain after an injection and show up as carryover in subsequent injections.”

All LC instrument vendors recommend periodic preventive maintenance to address routine system wear. Simeone also recommends that users flush the system after using aggressive solvents or buffers that can corrode LC system components, which is another source of carryover.

Dr. Andreas Otto, product manager at Agilent Technologies (Santa Clara, CA), notes that poor HPLC maintenance can lead to contaminated or spoiled solvents. “Leaving HPLC capillaries filled with water for long periods can promote algae growth, which may lead to system clogging or sample- independent effects, which are observed as carryover.” Carryover is particularly troublesome with autosamplers, which use needles to draw samples from vials or multiwell plates into the sample loop. Inadequate rinsing and cleaning of needles is a major source of carryover in consecutive runs.

Some carryover involves just one or several components of multicomponent samples that may be interacting, unexpectedly, with system materials such as metals. “Ferrous metals may bind to specific biological analytes, leading to carryover or selective irreversible sequestration in HPLC runs,” Otto adds. Potential workarounds include assessing the compatibilities of known analytes with HPLC systems, passivation, and using bioinert HPLC components.

HPLC vendors have introduced features that minimize carryover through dual needle usage, which increases washing time between analytical runs. On this point, Curtis Campbell, PhD, OEM/VAR business development manager at Shimadzu Scientific Instruments (Columbia, MD), advises users to use a wash solvent appropriate for the sample and diluent. “When analyzing ionic samples, a wash solution containing counterions provides effective adsorption suppression. When analyzing hydrophobic samples, using an organic solvent as the needle wash solution can reduce carryover because it acts to solubilize and wash away the adsorbed sample components. The needle wash solution should be treated like the mobile phase. It should be changed regularly, and moreover, the wash solution reservoir bottles should periodically be replaced or thoroughly washed to prevent the growth of microorganisms.”

When components of complex samples have significantly different chemical or physical properties, a single rinse solution is often insufficient for adequate rinsing. Shimadzu autosamplers incorporate a flow path and materials that resist adsorption and rinse options that minimize carryover. “The needle’s outer surface can be rinsed by multiple solvents, while the inner surface can be rinsed by up to three rinse solutions,” says Campbell.

For additional information including useful articles and a list of manufacturers, visit www.labmanager.com/Chromatography