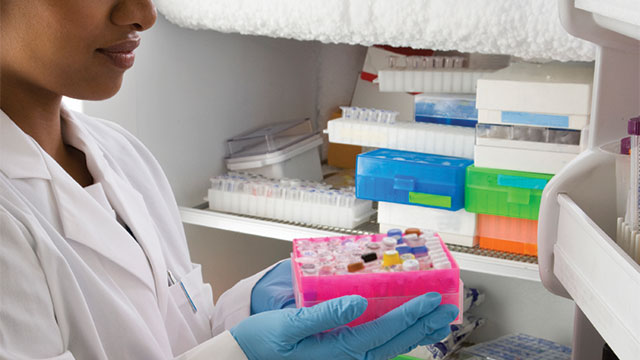 Former Los Alamos researcher Richard Epstein, PhD, has formed a start-up company, CryorayCoolers, to produce refrigerators based on anti-Stokes laser fluorescence, while a group at Louisiana State University headed by Prof. Shane Stadler is patenting refrigeration based on magnetocaloric materials.

By far the most successful solid-state cooling technology is embodied in products under development at Phononic (Research Triangle Park, NC), whose soon-to-debut products are based on Peltier cooling.

“Engineers balk when you mention that term,” admits Michael Demasi, VP and general manager for cold products at Phononic. “Peltier, or thermoelectric cooling, has a poor track record.”

Until recently, the technology has been most applied to cooling small structures, or for use in areas that are inaccessible to compressors; for example, in highend electronics systems. “We discovered how to make a better thermoelectric material, and turn that into a high-performing refrigerator,” Demasi continues. “Manufacturers and distributors don’t believe it until they see it.”

Unlike vapor-compression refrigeration, Peltier cooling has no moving parts and is practically silent. The Peltier effect is achieved by passing an electrical current through a thermoelectric material. One side of the structure heats, and the other side cools, so the approach works for either heating or cooling.

Since Peltier cooling does not depend on air flow, the entire inside volume of a unit is usable. The smaller footprint allows for personalized refrigeration and less walking back and forth between the bench and the noisy, overheated refrigerator/freezer corridor.

But according to Bonet, solid state presents a tradeoff between temperature and the amount of heat such refrigeration units can remove. Solid-state coolers can reach very low temperatures but, Bonet says, they cannot remove enough heat to cool a freezer or maintain its temperature after a door opening. He concedes that solid-state technology is best suited for +4°C conditions where its small size and relatively quiet performance can meet the needs of niche applications. However, the technology still suffers from low heat removal capacity, which can negatively affect temperature uniformity when customers open the refrigerator door to access their samples.

“Coolant-based systems are anywhere from two to three times as efficient as the solid-state modules under many typical conditions,” Bonet continues.

“It’s a matter of materials science. These units are not practical at -20°C, -30°C, or -80°C. Companies have been working on improving that performance for a long time.”

Bonet notes that variable-speed compressor models are about as quiet as solid-state cooling, and represent only a five percent to ten percent cost premium versus traditional coolant compressors.

Bonet suggests that solid state is ideal for small-area cooling; for example, large heat-generating microprocessors in computers and large servers. “These chips are about half the size of a handheld tablet or mobile phone and get very hot,” Bonet says. “You can put the solid-state cooling devices directly on them. There are hundreds of other applications in localized cooling as well.”

But within this sea of skepticism Phononic is forging ahead with commercialization. The company is introducing a 1.8 cu. ft. desktop 4°C refrigerator in 3Q 2015, and has a 5+ cu. ft. under-counter model in development. The company has demonstrated solid-state freezing, and will be launching a -20°C laboratory freezer in 1Q 2016, with plans for even lower temperatures.

For additional resources on cold storage, including useful articles and a list of manufacturers, visit www.labmanager.com/coldstorage