Nearly a decade ago, global news outlets reported vast ice melt in the Arctic as sapphire lakes glimmered across the previously frozen Greenland ice sheet, one of the most important contributors to sea-level rise. Now researchers have revealed the long-term impact of that extreme melt.

Using a new approach to ice-penetrating radar data, Stanford University scientists show that this melting left behind a contiguous layer of refrozen ice inside the snowpack, including near the middle of the ice sheet where surface melting is usually minimal. Most importantly, the formation of the melt layer changed the ice sheet's behavior by reducing its ability to store future meltwater. The research appears in Nature Communications Apr. 20.

"When you have these extreme, one-off melt years, it's not just adding more to Greenland's contribution to sea-level rise in that year—it's also creating these persistent structural changes in the ice sheet itself," said lead study author Riley Culberg, a PhD student in electrical engineering. "This continental-scale picture helps us understand what kind of melt and snow conditions allowed this layer to form."

The 2012 melt season was caused by unusually warm temperatures exacerbated by high atmospheric pressure over Greenland—an extreme event that may have been caused or intensified by climate change. The Greenland ice sheet has experienced five record-breaking melt seasons since 2000, with the most recent occurring in 2019.

"Normally we'd say the ice sheet would just shrug off weather—ice sheets tend to be big, calm, slow things," said senior author Dustin Schroeder, an assistant professor of geophysics at Stanford's School of Earth, Energy & Environmental Sciences (Stanford Earth). "This is really one of the first cases where you can say, shockingly, in some ways, these slow, calm ice sheets care a lot about a single extreme event in a particularly warm year." 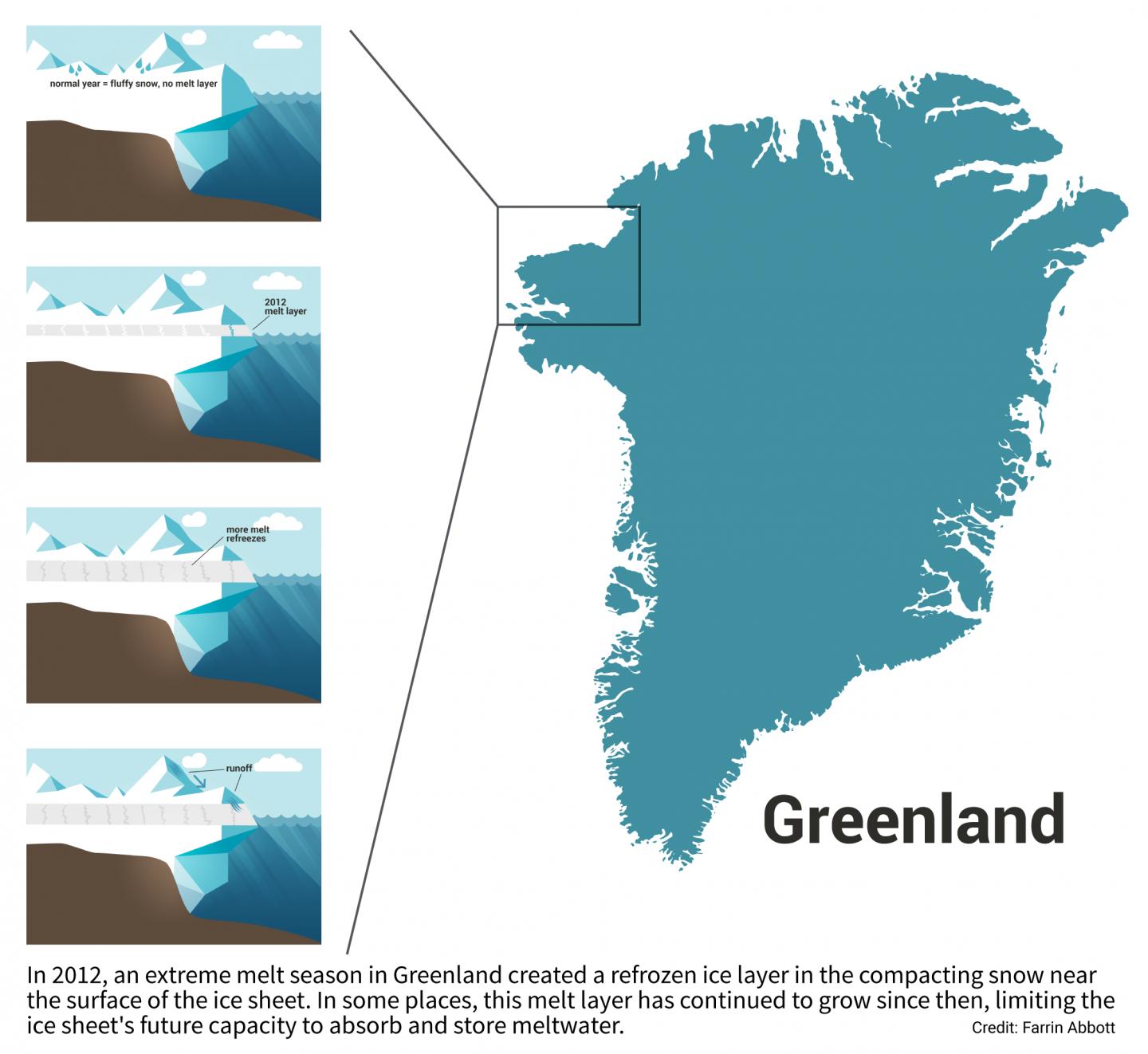 Airborne radar data, a major expansion to single-site field observations on the icy poles, is typically used to study the bottom of the ice sheet. But by pushing past technical and computational limitations through advanced modeling, the team was able to reanalyze radar data collected by flights from NASA's Operation IceBridge from 2012 to 2017 to interpret melt near the surface of the ice sheet, at a depth up to about 50 feet.

"Once those challenges were overcome, all of a sudden, we started seeing meltwater ice layers near the surface of the ice sheet," Schroeder said. "It turns out we've been building records that, as a community, we didn't fully realize we were making."

Melting ice sheets and glaciers are the biggest contributors to sea-level rise—and the most complex elements to incorporate into climate model projections. Ice sheet regions that haven't experienced extreme melt can store meltwater in the upper 150 feet, thereby preventing it from flowing into the ocean. A melt layer like the one from 2012 can reduce the storage capacity to about 15 feet in some parts of the Greenland Ice Sheet, according to the research.

The type of melt followed by rapid freeze experienced in 2012 can be compared to wintry conditions in much of the world: snow falls to the ground, a few warm days melt it a little, then when it freezes again, it creates slick ice—the kind that no one would want to drive on.

In the long run, meltwater that can no longer be stored in the upper part of the ice sheet may drain down to the ice bed, creating slippery conditions that speed up the ice and send chunks into the ocean, raising sea levels more quickly.

Greenland currently experiences change much more rapidly than its South Pole counterpart. But lessons from Greenland may be applied to Antarctica when the seasons shift, Schroeder said.

"I think now there's no question that when you're trying to project into the future, a warming Antarctic will have all these processes," Schroeder said. "If we don't use Greenland now to better understand this stuff, our capacity to understand how a warmer world will be is not a hopeful proposition."

- This press release was originally published on the Stanford News website. It has been edited for style