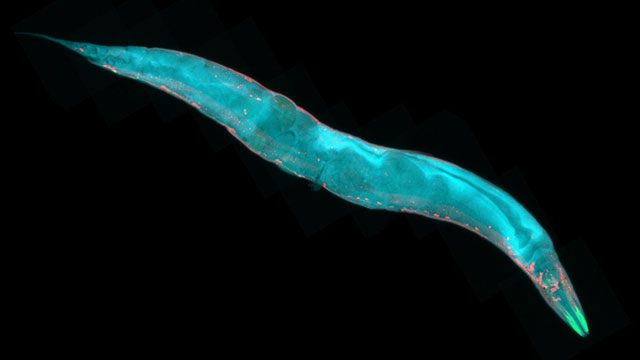 July 3, 2019 — (BRONX, NY) — In a study published online July 3 in Nature, researchers at Albert Einstein College of Medicine describe the first complete wiring diagram of the nervous system of an animal, the roundworm Caenorhabditis elegans, used by scientists worldwide as a model organism. The study includes adults of both sexes and reveals substantial differences between them.

The findings mark a major milestone in the field of 'connectomics,' the effort to map the myriad neural connections in a brain, brain region, or nervous system to find the specific nerve connections responsible for particular behaviors.

"Structure is always central in biology," said study leader Scott Emmons, PhD, professor of genetics and in the Dominick P. Purpura Department of Neuroscience and the Siegfried Ullmann Chair in Molecular Genetics at Einstein. "The structure of DNA revealed how genes work, and the structure of proteins revealed how enzymes function. Now, the structure of the nervous system is revealing how animals behave and how neural connections go wrong to cause disease."

Researchers have hypothesized that some neurological and psychiatric disorders, such as schizophrenia and autism, are "connectopathies," that is, problems caused by "faulty wiring." "This hypothesis is strengthened by the finding that several mental disorders are associated with mutations in genes that are thought to determine connectivity," said Dr. Emmons. "Connectomics has the potential to help us understand the basis of some mental illnesses, possibly suggesting avenues for therapy."

Because C. elegans is so tiny—adults are just one millimeter long and have only about 1,000 cells—its simple nervous system of a few hundred neurons (302 in the hermaphrodite/female sex, 385 in the male) makes it one of the best animal models for understanding the billions-times-more-complex human brain. It was also the first multi-cellular organism to have its entire genome sequenced.

Dr. Emmons' study builds on the groundbreaking work of the late British biologist Sydney Brenner, who in 2002 shared the Nobel Prize in Physiology or Medicine for his C. elegans research. Dr. Brenner's laboratory, in an effort led by laboratory member John White, published the first map of the C. elegans nervous system in 1986, after painstakingly analyzing neural structures visible on thousands of serial electron micrographs of the roundworm. Each image consisted of a cross-sectional "slice" a thousand times thinner than a human hair. He and his colleagues manually "connected the dots" between each slice, linking the structures from one image to another to create detailed representations of the nerves and the 5,000 or so connections (synapses) among them.

The tour de force effort by Drs. Brenner and White, 20 years in the making, launched the field of connectomics and established the roundworm as an essential animal model for the study of biology and human disease. But their map, informally called "The Mind of a Worm," skipped large portions of the worm's body and included just one of the sexes—the hermaphrodite, or female—not the male.

Taking Up the Baton

For the new study, Dr. Emmons' team analyzed new roundworm electron micrographs as well as Dr. Brenner's old ones and pieced them together using specially developed software to create complete wiring diagrams of entire adult animals of both C. elegans sexes. The diagrams include all connections between individual neurons, connections from neurons to the worm's muscles and other tissues, such as the gut and skin, and synapses between the muscle cells, with estimates of the strength of those synapses.

"While the synaptic pathways in the two sexes are substantially similar, a number of the synapses differ in strength, providing a basis for understanding sex-specific behaviors," said Dr. Emmons. The primary sex differences pertain to reproductive functions: in vulval and uterine muscles and the motor neurons that control them in the hermaphrodite; and in the large number of additional neurons, sex muscles, and connections in the tail that generate the circuits for copulation in the male. But beyond these, a surprising number of synapses between neurons in central pathways shared by both sexes also appear to differ considerably in strength.

"These connected networks serve as starting points for deciphering the neural control of C. elegans behavior," said Dr. Emmons. "Since the roundworm nervous system contains many of the same molecules as the human nervous system, what we learn about the former can help us understand the latter."

Dr. Emmons is currently studying how the roundworm connectome is encoded by its genome.