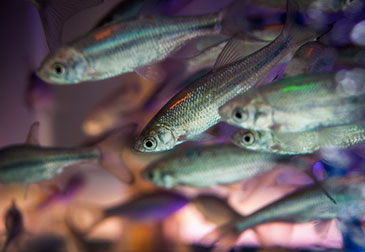 Some of the fish were trained to expect food in a particular dish.  These ‘informed’ individuals were then tested on their ability to reach the dish with a group of eight untrained fish who were uninformed about the target.

Informed fish that exhibited faster and straighter paths (indicative of greater goal-orientation) were more likely to reach their preferred target.  However, such behaviour was associated with a tendency to leave the untrained fish behind, therefore failing to transmit their preference to others.  Most informed fish were moderately assertive, balancing these two opposing forces.

Dr Ioannou said: “This is the first study showing that such a trade-off exists in animals, matching predictions from computer simulations and what we see in humans.  It shows how general this trade-off in leadership is.”

Either all or none of the untrained fish stayed with the trained fish in the majority of trials, the researchers found.

“This indicates the importance of interactions between those following a leader,“ Dr Ioannou continued.  “Leadership thus takes place within a wider network of social interactions.”

These mechanistic aspects of effective leadership have important functional consequences for leaders, for example by limiting the speed of decision making when group cohesion is critical.  It also shows that getting just a small proportion of followers on board may be enough to sway the rest.