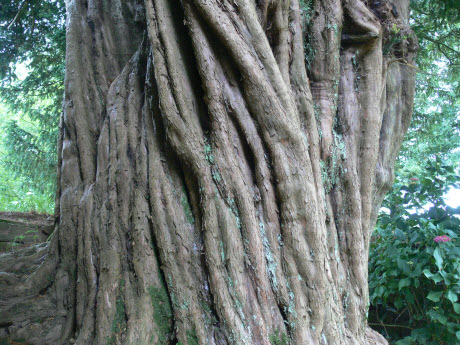 The way yew trees protect themselves from disease could lead to new, cheaper cancer treatments, University of Guelph researchers say.Photo credit: Lamiot, Wikimedia CommonsCheaper anti-cancer drugs for humans might ultimately stem from a new study by University of Guelph scientists into a kind of microbial “bandage” that protects yew trees from disease-causing fungi.

A new paper published today in Current Biology is the first to show how beneficial fungi living naturally in yew trees serve as a combination bandage-immune system for the plant, says study co-author Prof. Manish Raizada, Department of Plant Agriculture.

Taxol is harvested from yew bark for use as an important cancer-fighting drug, but efforts to make synthetic taxol in the lab have been unsuccessful.

Raizada said the research team’s findings might point drug makers to a less expensive synthetic process for making more of the substance. Drug companies might one day harness beneficial fungi to pump out more taxol cheaply and easily to meet demand – what he calls a “holy grail” for cancer drug makers.

Former PhD student Sameh Soliman is lead author of the paper. Co-authors are U of G molecular and cellular biology professors John Greenwood and Dick Mosser, along with researchers at Agriculture and Agri-Food Canada and at American universities.

Researchers have wondered why yew trees and non-pathogenic fungi living in them both produce taxol, a redundant process that uses a lot of energy and nutrients.

The answer lies in the unusual way that yews and their relatives make new branches, said Raizada.

Yews branch from buds under the bark. Branching causes cracks to open deep into the tree’s vascular system, an open wound that invites disease-causing fungi.

Taxol normally helps protect against pathogenic fungi. But the substance is toxic to the tree’s own young buds.

The researchers found that naturally occurring fungi in the yew’s vascular system act like an immune system to swarm a wound site and protect against invading pathogens.

The taxol fungicide is contained in “fatty bodies” that direct it only against pathogens and not the tree’s sensitive tissues.

“The fatty bodies come together to form a wall and seal the wound site,” says Raizada. “It’s really amazing, it’s so beautiful.”

Raizada now hopes to learn more about the genes and chemical pathways involved in making taxol in both trees and fungi.

He said this research might also help the agriculture and forestry sector. “They should be aware of these microbes because they might become organic bio-control agents.”