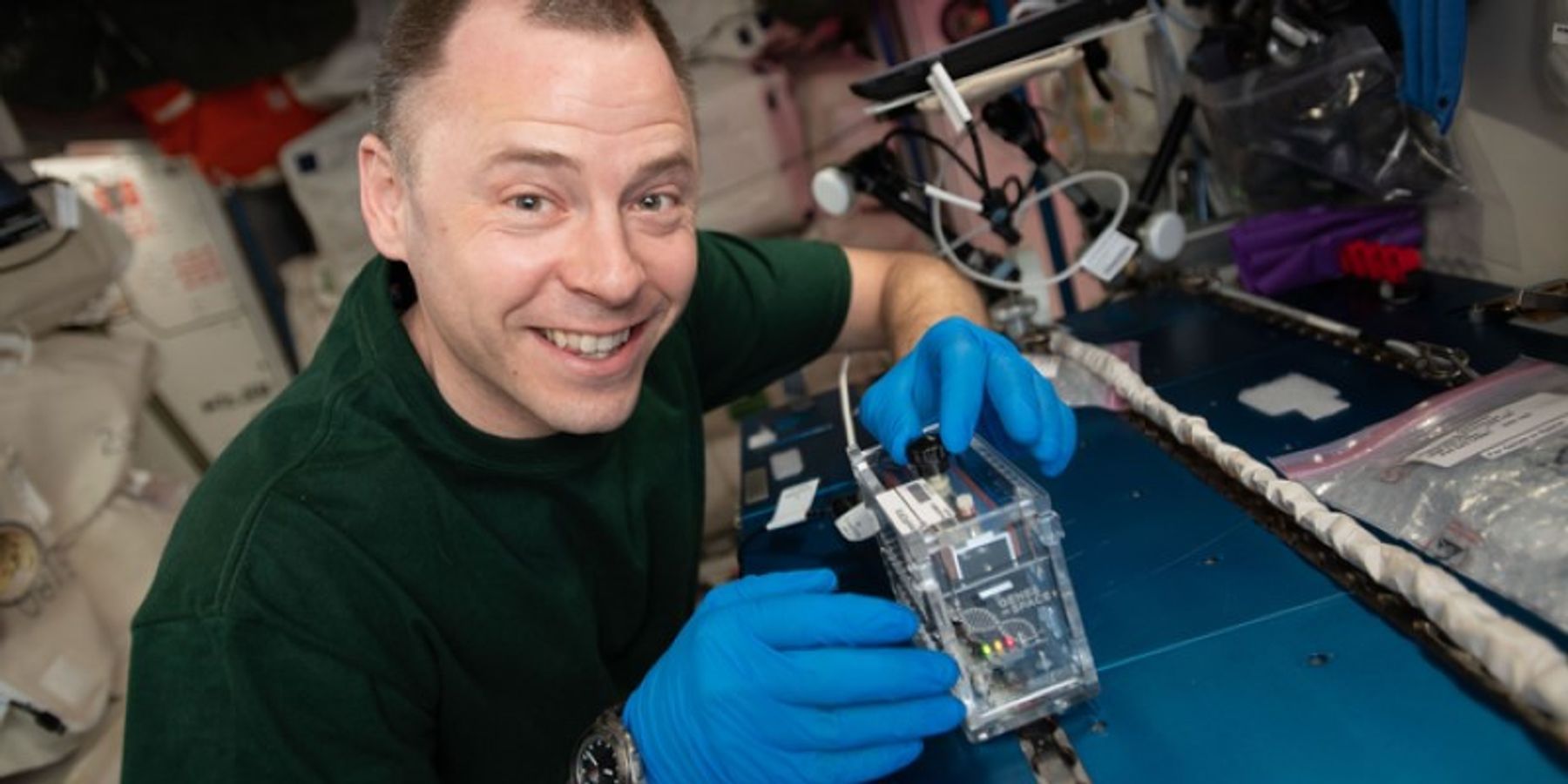 NASA astronaut Nick Hague runs an analysis with the miniPCR hardware for Genes in Space-6 during Expedition 59. This experiment explored how space radiation damages DNA and how cells repair that damage in microgravity.
NASA

Studying DNA repair is key to future space exploration, which could expose humans to risk of DNA damage caused by radiation. Conditions in space also could affect the way the body repairs such damage, potentially compounding that risk.

Thanks to the work of four students, a team of researchers, and the first use in space of the CRISPR genome editing technique, a recent investigation aboard the International Space Station successfully generated breaks in the DNA of a common yeast, directed the method of repair, and sequenced the patched-up DNA to determine whether its original order was restored. The Genes in Space-6 researchers reported this first completion of the entire process in space in a published paper.

These results significantly expand the space station’s molecular biology toolkit, enabling studies of DNA repair and a variety of other biological investigations in microgravity.

The body repairs double-strand breaks in DNA—the severing of both of the intertwined strands of the double helix—one of two major ways. In one method, bases may be added or deleted. The other method rejoins the strands without changing the DNA sequence. Technical and safety concerns had prevented study of these repair processes aboard the space station until now.

Genes in Space-6 was the brainchild of four students from Minnesota: Aarthi Vijayakumar, Michelle Sung, Rebecca Li, and David Li. They earned the opportunity to participate in this research as a part of the Genes in Space program, a national contest that challenges students in grades seven through 12 to design DNA analysis experiments using the ISS US National Lab and tools aboard the station. The team also are co-authors on the results paper.

To generate DNA breaks at specific locations, the team used a genome editing technique called CRISPR, which stands for Clustered Regularly Interspaced Short Palindromic Repeats. These are short, repeated sequences of DNA in bacteria with viral DNA sequences in between them. Bacteria transcribe the viral DNA sequences to RNA, which then guides a specific protein to the viral DNA and cuts it. Scientists harnessed this naturally occurring immune response to create the technique.

By using CRISPR, the researchers can create precisely controlled breaks in a known location of the genome, eliminating possible risks from random damage. That laid the groundwork for allowing DNA repair to occur in space, providing the opportunity to gain insight into the type of repair mechanism used.

“Understanding whether one type of repair is less error-prone has important implications,” says Sarah Wallace, a microbiologist in the Biomedical Research and Environmental Sciences Division at NASA’s Johnson Space Center in Houston. “Could a therapeutic be developed to encourage one pathway over the other, or do we need more radiation shielding, or both? It is important to gain this understanding to help ensure that we are protecting the crew and helping them recover in the best possible way.”

Genes in Space and other DNA-related research on the space station also has produced advances in the hardware needed. Tools on Earth do not necessarily lend themselves to spaceflight, says Sarah Rommel, the paper’s primary author and a researcher in the Microbiology Laboratory at Johnson. “We cannot take exactly what we have on Earth and simply put it in space, because we have to keep the crew and all the environmental life systems on board safe. For example, we made our own custom kits for the whole process, looking at how to use the least amount of the safest materials and still get the best science.”

“While more work is needed to understand potential preferences toward DNA repair processes used in space, this work demonstrated the sophistication of what can be done with the molecular tools onboard,” adds Wallace. “Having an entire molecular laboratory in space is just going to explode what we can do there, including more complex investigations such as this CRISPR work. We also are looking at how to put these methods into other settings such as hospital rooms. The ability to generate near-real time data could provide a huge benefit in dealing with the anti-microbial resistance crisis and in resource-limited environments.”

With the results confirming that researchers now can precisely edit a gene in space, Rommel and Wallace hope other researchers start using this tool. “We validated that it is not too complicated to do in space,” Rommel says. “It worked as it was intended, and it did what it was supposed to do.”

- This press release provided by the NASA Johnson Space Center