Using an approach that combines ultrasound imaging and genetic engineering of bacterial microbes, a team from California Institute of Technology (Caltech), with funding from the National Institute of Biomedical Imaging and Bioengineering (NIBIB), has created a powerful new system to track bacteria dispatched to deliver therapies deep inside the body. Researchers, and eventually doctors, will use the ultrasound/genetic engineering approach to keep tabs on cell-based therapies that treat many conditions, including inflammatory diseases, gut diseases, and cancer. Doctors could monitor the therapies with ultrasound to determine their effect. 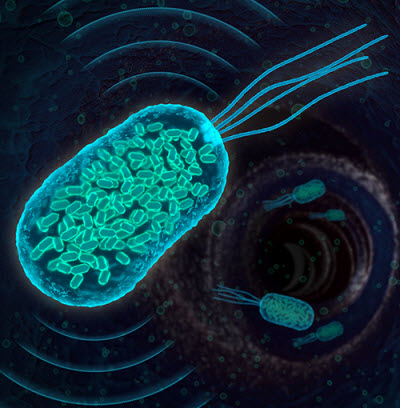 Bacteria containing gas-filled protein nanostructures known as gas vesicles. The nanostructures can scatter sound waves to produce ultrasound contrast. This allows the bacterial cells to be tracked non-invasively inside animal hosts.Illustration Credit: Barth van Rossum for Caltech“This is the next big advance for ultrasound,” said Randy King, PhD, director of the NIBIB program in ultrasound. “Ultrasound has been around for 100 years; it has been used in diagnostic imaging for 50 years and for therapies in the clinic for 10 years or so. This is the next step, where we will see ultrasound become a tool to interact within the body at the micro-scale.”

Ultrasound imaging is achieved by aiming high frequency sound waves into an area of the body and deciphering the pattern of scattered waves. In diagnostic ultrasound, the imperceptible waves bounce off dense tissue or bone, but not soft tissue or fluids. The equipment instantaneously translates the reverberating signal into a visible image. Ultrasound does not produce ionizing radiation, so is safe, even to monitor pregnancies. With equipment modifications, that safe and relatively inexpensive imaging technology can also be used to monitor biological interactions at the micrometer scale. Researchers, and eventually clinicians, could use ultrasound to follow bacteria that have been modified for therapeutic affects inside the body.

The Cal Tech team, in a study described in the Jan. 4, 2018, issue of Nature, discovered a way to bioengineer bacteria with ultrasound scattering particles, to create a good image. When injected into mice and scanned with ultrasound, the genetically altered bacteria can be tracked. The new ultrasound method of detecting the bacteria offers greater precision than popular light-based methods for biological detection when used for imaging of living organisms. Light-based methods include fluorescence and bioluminescence; fluorescence uses a dye molecule or genetically coded fluorescent protein that can be detected under a light source, whereas bioluminescence, like the light of a firefly, glows on its own.

Mikhail G. Shapiro, PhD, assistant professor of chemical engineering at Caltech, leads the study team. In prior research, he discovered that cylindrical gas-filled protein nanostructures called gas vesicles, which exist in various types of aquatic microbes, could be imaged with ultrasound. The gas vesicles give the microbes buoyancy in their natural environment, and their gas contents yield a distinct signal on an ultrasound scan. By isolating the genetic sequence for the gas vesicles from aquatic microbes, then inserting that sequence into the genome of bacteria, Shapiro’s team produced modified bacteria visible to ultrasound. So far, the team demonstrated the technique in two types of bacteria that are commonly occur in animal microbiomes.

“This work focuses on enabling live cells in the body—in this case live bacterial cells—to be seen with ultrasound,” Shapiro said. “It is important to be able to monitor those cells, so we can study both their basic biology and facilitate the development of new types of diagnostics and therapeutic agents that are based on the cells.”

The Caltech team adapted the genetic sequence for gas vesicles from two types of microbes, to make optimally detectable bacteria. “The challenge was to take this fairly complex genetic machinery to form these structures and move it into this new cellular environment, and have it work properly,” Shapiro said.

As a first test to find the bacteria within an animal, the researchers produced modified E. coli bacteria that each contained about 100 gas vesicles, which they injected into the colon of laboratory mice. “By trying a few different combinations of genes, we ultimately came upon one that allowed the production of optimal gas vesicles in a cell that could produce ultrasound contrast,” Shapiro said. They also modified S. typhimurium, another type of bacteria that is in the Salmonella family and is studied for its ability to target cancer cells. They injected modified S. typhimurium cells into tumors and showed that the modified cells could be imaged with ultrasound.

To enhance the ultrasound contrast, the researchers used high-pressure pulses to collapse the gas vesicles during imaging. They wanted to produce slightly different gas vesicles that collapse at different pressure thresholds to demarcate two separate microbes in a biological environment. They also demonstrated that collapsing gas vesicles did not damage or affect cells’ reproductive potential.

A comparison test for the ultrasound/genetic engineering versus bioluminescence produced exciting results. Fluorescence and bioluminescence are already widely used in biology and have guided innumerable discoveries over the past 50 years. Bioluminsecent bacteria could be detected in the animal, but optical imaging doesn’t show depth or untagged surrounding anatomical structures inside the mouse abdomen. Using ultrasound, the E. coli bacteria modified with the gas vesicle could be detected in precise locations of the mouse colon, relative to nearby anatomical structures like the bladder. 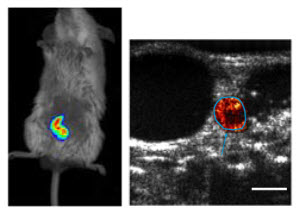 Luminescent bacteria are detected, left, but optical imaging lacks detail of surrounding deep anatomy. Ultrasound imaging, right, depicts modified bacteria in the colon and nearby the bladder.Image Credit: Shapiro Lab, CaltechNIBIB’s King underscored this finding from the study. “The acoustic signal that the team could see opens up new possibilities, because ultrasound can penetrate deeper than light, so we can see deeper structures in the body.”

Shapiro is pleased about any comparison for his new approach with such a powerful and important tool as fluorescence, but also can imagine the scientific possibilities that his team’s discovery could create.

“We hope we can engineer various versions of acoustic reporter genes, for multicolor ultrasound imaging, functional sensing—which detects how cells behave and work together—and with many different cell types. It could provide a key advantage over fluorescence, which is very difficult to see in deep tissue. With ultrasound we would be able to look at things happening deep inside living animals,” Shapiro said.

King tracks developments in the ultrasound field and has been anticipating this one for some time. This study is the first to demonstrate how ultrasound can play a key role in detecting a probe that before now required a color change, a light-frequency change, or a modified radioactivity output. “We knew they’d be coming out with acoustic probes eventually,” he said. “In this case, the study focuses on imaging, but it has promise as an approach for both imaging and therapy in the future.”

Shapiro believes that genetically engineered cell therapies offer some advantages over working with small molecules that today are the focus of many of pharmacological discoveries. “Molecules as a therapeutic solution are fairly limited, going somewhere in the body to bind to a receptor or block a particular enzyme,” Shapiro said. “Cells that you’ve engineered genetically can be more versatile; they can migrate to sites of disease, detect signals in their surroundings, and perform functions based on those signals that allow them to decide whether to either kill cells, release molecules, self-destruct, or multiply.”

The Caltech team is plotting a course for the future that they hope will involve expansion in the synthetic biology field. “We are lucky to have reached this milestone, but we really are just at the beginning,” Shapiro said, adding that their laboratory is one of the few conducting this type of research. “I am hopeful that other people will get into this field and take up this technology so collectively we can make an impact. If we can make one one-thousandth the impact green fluorescent protein has had, that will be great.”

The researchers are depositing the gene sequences for gas vesicle modification of bacteria to AddGene, a not-for-profit repository that facilitates free data sharing among scientists around the world.

The study was supported in part by NIBIB grant EB018975.