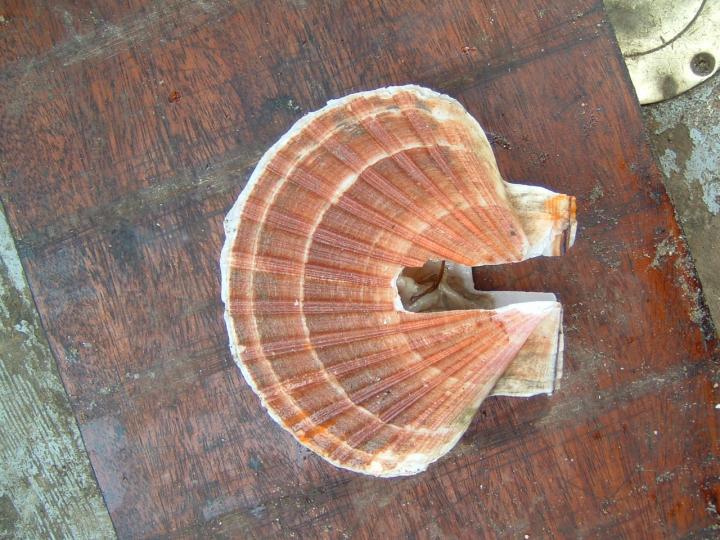 Metal pollution from historic mining appears to be weakening scallop shells and threatening marine ecosystems in an area off the coast of the Isle of Man, a major new study suggests.

The research, led by an interdisciplinary team at the University of York, suggests that the contamination of seabed sediments with zinc, lead, and copper from the mining of these metals, which peaked on the island in the late 19th century, is causing the shells of king scallops to become significantly more brittle.

The thinning and weakening of shells threatens the species by leaving them more exposed to the crushing claws of crabs and lobsters, and, in turn, threatens the marine ecosystem because of the important functions, such as water filtration, that molluscs like scallops carry out.

Given that metal contamination is common in many coastal areas around the world, the researchers are concerned that other species of marine mollusks like mussels, oysters and clams, which together provide more than a quarter of the world's seafood, may be similarly affected.

The current consensus on acceptable levels of metal pollution should be revised, the researchers say, as evidence of damage to scallop shells was present even in areas with metal contamination levels currently not thought to cause significant damage to the marine environment.

Lead author of the study, Dr. Bryce Stewart from the Department of Environment and Geography at the University of York, said: "The fact that comparably low levels of heavy metal contaminations appear to affect shell structure and strength in such a potent way represents a challenge to marine species management and conservation strategies. This is particularly true given that the effects we observed are likely to be amplified in the future by ongoing human activities and climate change.

The potential long-term impact of anthropogenic metal pollution on marine organisms, as shown in our work, is remarkable since the last major mine on the Isle of Man closed in 1908."

Over a period of over 13 years, the researchers compared scallops collected from six areas of the Irish Sea around the Isle of Man. Most scallops exhibited perfectly normal shell growth and strength. However, in one area off Laxey—known to be contaminated with metal pollution, the shells were significantly weaker.

Structural analysis of shells by physicists at the University of York revealed that Laxey scallops had significantly weaker shells and a disrupted shell structure. Lethal damage rates in scallop catches from Laxey were twice as high as those at uncontaminated areas.

Joint corresponding author and professor Roland Kröger, from the Department of Physics at the University of York, said: "We analyzed the shell structure of the scallops with cutting-edge microscopy techniques and discovered that shells from Laxey were thinner and exhibited a pronounced mineralization disruption parallel to the shell surface within the central region of both the top and bottom valves.

Our data suggest that these disruptions caused reduced fracture strength and therefore could increase mortality.

It is not clear exactly how metal bearing sediments may be affecting the shell formation process. Metals could be incorporated into shells replacing calcium during the biomineralization process or they may modify the activity of proteins during the crystallization process and disrupt shell growth."

The researchers looked at a wide range of alternative explanations for the impact on scallop shells but found no other environmental factors that could explain their results.

Dr Stewart added: "While the scallops are still perfectly safe to eat, we believe our results provide a compelling case that metal contamination is playing an important role in the development of thinner and weaker shells at Laxey, and therefore the observed high damage rates.

The shell characteristics of bivalve mollusks such as clams, oysters, mussels and scallops could potentially function as a good bellwether for the scientific community in assessments of how pollutants are affecting biological organisms."