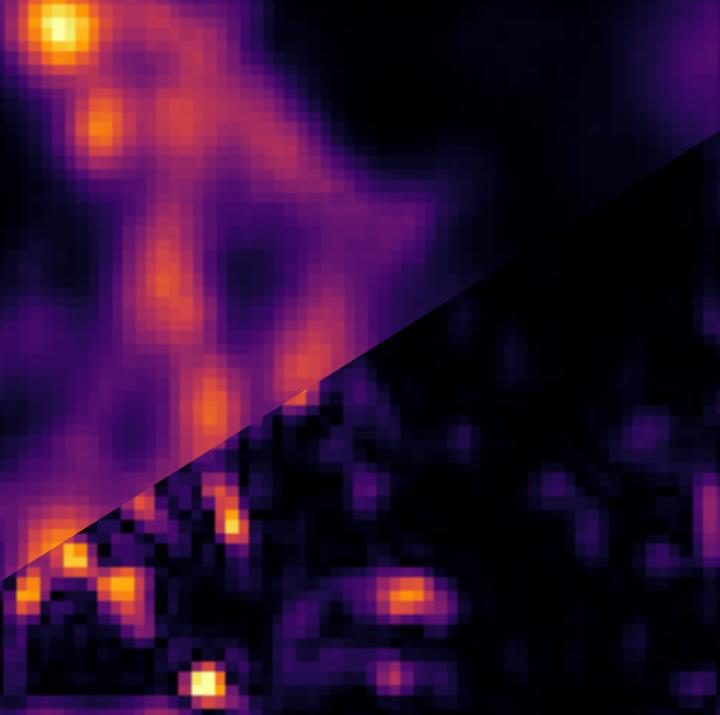 The Polish-Israeli team from the Faculty of Physics of the University of Warsaw and the Weizmann Institute of Science has made another significant achievement in fluorescent microscopy. In the pages of the Optica journal, the team presented a new method of microscopy which, in theory, has no resolution limit. In practice, the team managed to demonstrate a fourfold improvement over the diffraction limit.

The continued development of biological sciences and medicine requires the ability to examine smaller and smaller objects. Scientists need to see into the structure of, and the mutual relationships between, for example, proteins in cells. At the same time, the samples being observed should not differ from the structures naturally occurring in biological organisms, which rules out the use of aggressive procedures and reagents. Although it revolutionized the natural sciences, the classical optical microscope is clearly insufficient today. Due to the wavelike nature of light, an optical microscope does not allow imaging structures smaller than about 250 nanometers. As a result, objects closer to each other than half the wavelength of light (which is about 250 nm for green light) cannot be discerned. This phenomenon, known as the diffraction limit, one of the main obstacles in observing the tiniest biological structures, scientists have long attempted to overcome. Electron microscopes provide orders of magnitude better resolution but only allow the examination of inanimate objects, which must be placed in a vacuum and bombarded by an electron beam. For this reason, electron microscopy cannot be used for studying living organisms and the natural processes occurring in them. This is where fluorescence microscopy steps in, hence the rapid development of super-resolution fluorescence microscopy as a field of physical sciences and the two Nobel Prizes already awarded for related research—in 2008 and 2014.

Nowadays several techniques of fluorescence microscopy are available, and some of them have become widespread in biological imaging. Some methods, such as PALM, STORM, or STED microscopy, are characterized by an ultra-high resolution and allow discerning objects located just a dozen or so nanometers from each other. However, these techniques require long exposure times and a complex procedure of biological specimen preparation. Other techniques, such as SIM or ISM microscopy, are easy to use, but offer a very limited resolution improvement, allowing to identify structures only half the size of the diffraction limit.

Aleksandra Sroda, Adrian Makowski, and Dr. Radek Lapkiewicz from the Quantum Optics Lab at the Faculty of Physics of the University of Warsaw, in cooperation with Dr. Ron Tenne, Uri Rossman, Gur Lubin, and professor Dan Oron from the Weizmann Institute of Science in Israel, have introduced a new technique of super-resolution microscopy, called Super-resolution optical fluctuation image scanning microscopy (SOFISM). In SOFISM, the naturally occurring fluctuations in emission intensity of fluorescent markers are used to further enhance the spatial resolution of an image scanning microscope (ISM). ISM, an emerging super-resolution method, has already been implemented in commercial products and proven valuable for the bio-imaging community. Largely, since it achieves a modest improvement in lateral resolution (x2), with very few changes to the optical setup and without the common handicap of long exposure times. Thus, it enables a natural extension of the capabilities of a standard confocal microscope. ISM uses a confocal microscope in which a single detector is replaced with a detector array. In SOFISM correlations of intensities detected by multiple detectors are computed. In principle, the measurement of the n-th order correlation can lead to a factor of 2n resolution improvement with respect to the diffraction limit. In practice, the resolution achievable for higher-order correlations is limited by the signal-to-noise ratio of the measurements.

“SOFISM is a compromise between ease of use and resolution. We believe that our method will fill the niche between the complex, difficult-to-use techniques providing very high resolution and the easy-to-use lower-resolution methods. SOFISM does not have a theoretical resolution limit, and in our article, we demonstrate results which are four times better than the diffraction limit. We also show that the SOFISM method has a high potential in the imaging of three-dimensional biological structures,” said Lapkiewicz.

Crucially, SOFISM is, in its technical aspects, highly accessible, as it only requires introducing a small modification to the widely-used confocal microscope—replacing its photomultiplier tube with a SPAD array detector. In addition, it is necessary to slightly increase the measurement time and change the data processing procedure. “Until recently, SPAD array detectors were expensive and their specifications were not sufficient for correlation-based microscopy. This situation has recently changed. The new SPAD detectors introduced last year removed both the technological and price-related barriers. This makes us think that fluorescence microscopy techniques such as SOFISM might, in a few years’ time, become widely used in the field of microscopic examination,” stressed Lapkiewicz.

The project was carried out under the FIRST TEAM program of the Foundation for Polish Science.