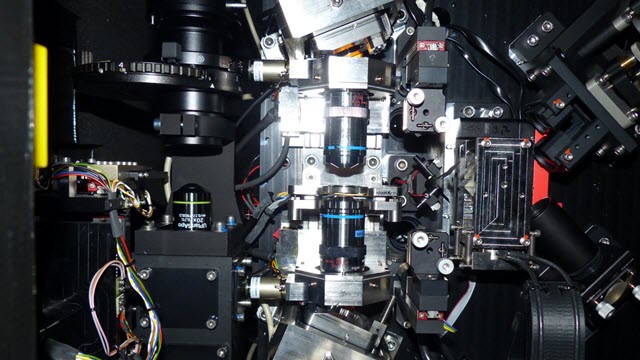 The inside of the interferometry microscope.Credit: Lisa Potter/University of Utah

The human immunodeficiency virus, or HIV, wages war in our bodies using a strategy evolved over millions of years that turns our own cellular machines against themselves. Despite massive strides in understanding the disease, there are still important gaps. For years, scientists at the University of Utah wished there was a way to visualize how the virus and its molecules interact with human cells in real time. So, a research group developed one.

The new method uses interferometry to capture extremely high-resolution visualizations of millions of molecules moving across viscous gels or a plasma membrane. Ipsita Saha, physics doctoral candidate and lead author of the study, developed a correlation analysis that theoretically explained how the interferometry microscope could distinguish between two types of movement—flow and diffusion—and she and Senior Author Saveez Saffarian verified it experimentally. The method brings us one step closer to visualizing how molecules interact in an actual living cell.

"There are already methods that capture how molecules flow and diffuse in two dimensions. We wanted to see what is happening across the entire cellular environment. How are these molecules working? What kind of interactions are taking place?" said Saha, who is also affiliated with the Center for Cell and Genome Science (CCGS) at the U.

"So far, we've been left to just imagine these interactions. We have very limited ways of actually going into the cell and observing how all of these molecules are dancing together at the same time," said Saffarian, associate professor of physics, adjunct assistant professor of biology and affiliate of the CCGS. "We really needed to generate higher-resolution methods that can look at the dynamics of biological molecules."

The study was published in the journal PLOS ONE on December 18, 2019.

Cells function like an efficient office. Proteins and other molecules carry out tasks, develop products, communicate with each other and move around, even leaving their particular cell to wade into the wider world. Movement is crucial for molecules to find and interact with each other and their environment. This study aimed to distinguish between two types of movements: flow and diffusion.

Molecules flow when they have a bias toward moving in a certain direction. Diffusion is when molecules move around randomly. To understand how cells or viruses function, it's important to understand the mechanics of how they move.

"Are these molecules carrying different things from one place to another, or are there other processes going on?" said Saha. "This method specifically can differentiate between flow and diffusion in three dimensions."

The researchers used an interferometry microscope, which measures the distance that light travels over nanoscales. Molecules emit photons that travel as light waves, each with specific amplitudes and frequencies. For the experiment, the microscope split a beam of light into two beams that traveled down different paths, eventually coming back to meet each other. These beams combine in a prism, and three separate reflections of their combination are imaged on three cameras. The interference is such that if a molecule moves 80 nanometers, its image is shifted onto a different camera. This is extremely high resolution—a human red blood cell is about 7,000 nanometers across. The researchers measured the resolution in voxels, which are pixels in three dimensions.

Saha and Saffarian created a sucrose gel injected with quantum dots--manmade nanoscale crystals that conduct electrons. The quantum dots produce a signal that the microscope can detect. By first learning how quantum dots move in the gel, the scientists validated their technique, which could then be applied to how proteins are moving inside a cell. They cooled the gel to room temperature to slow the substance down to a rate that the cameras could capture.

"You can actually see if molecules are going in a particular direction or if they're moving randomly. And you can do this in very, very small voxels across a large cross section of the sample, which has a huge wealth of information," said Saffarian. The scientists used the Center for High Performance Computing at the U to process the massive amounts of data.

While this method detects movement across viscous gels or plasma membranes, it is unable to create a map of particles moving across an actual cell. However, Saha and Saffarian are now collaborating with researchers at Thermo Fisher Scientific (FEI) in Germany to build a prototype of a microscope with much faster detectors that will be able to capture movement within living cells. They are part of a patent application for the technology and will analyze the data from the experiments.

"We can already use this method for slow processes, but in our lab, we are biologists at some level. We want to really understand how biology works, and the incentive behind all of this method development is to understand, what is the crazy dance of molecules within cells and tissues that allows really exotic biology to move forward? To get there, we need much faster detectors," Saffarian said.