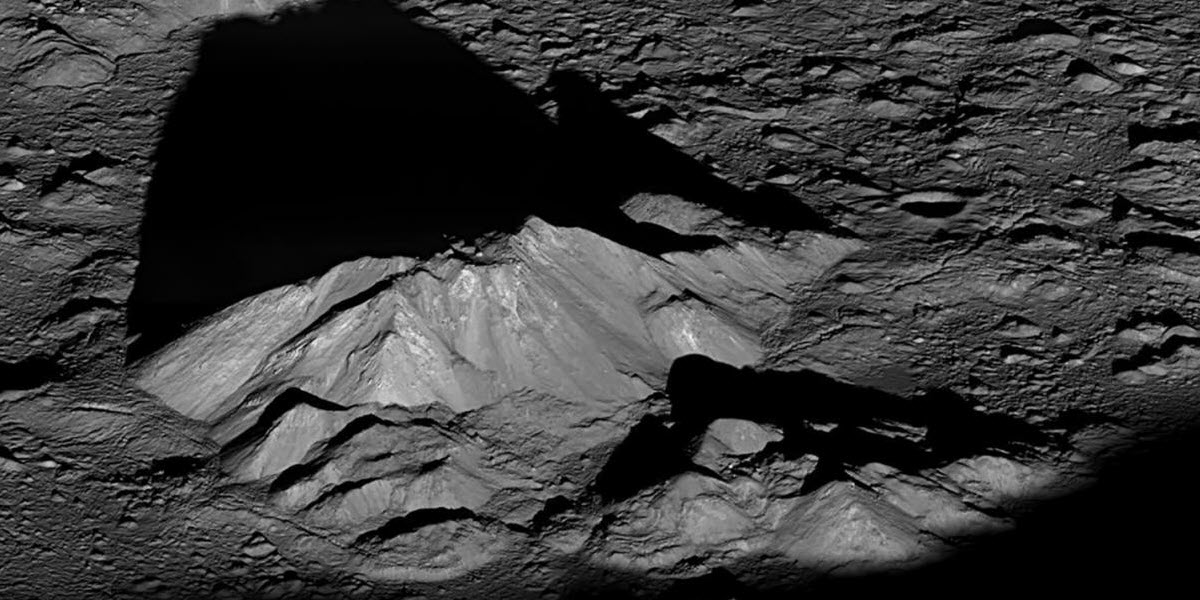 A mountain peak at the center of the Moon's Copernicus Crater has an abundance of olivine, a mineral that can help scientists understand the internal evolution of planetary bodies. A new technique developed by Brown University researchers can help to study olivine from afar.
NASA/GSFC/Arizona State University

PROVIDENCE, RI — [Brown University] — Planetary scientists from Brown University have developed a new remote sensing method for studying olivine, a mineral that could help scientists understand the early evolution of the Moon, Mars, and other planetary bodies.

"Olivine is understood to be a major component in the interiors of rocky planets," said Christopher Kremer, a PhD candidate at Brown University and lead author of a new paper describing the work. "It's a primary constituent of Earth's mantle, and it's been detected on the surfaces of the Moon and Mars in volcanic deposits or in impact craters that bring up material from the subsurface."

Current remote sensing techniques are good at spotting olivine from orbit, Kremer says, but scientists would like to do more than just spot it. They'd like to be able to learn more about its chemical makeup. All olivines have silicon and oxygen, but some are rich in iron while others have lots of magnesium.

To find out if there might be a way to see that composition using remote sensing, Kremer worked with Brown professors Carlé Pieters and Jack Mustard, as well as mountains of data from the Keck/NASA Reflectance Experiment Laboratory (RELAB), which is housed at Brown.

One method researchers use to study rocks on other planetary bodies is spectroscopy. Particular elements or compounds reflect or absorb different wavelengths of light to various degrees. By looking at the light spectra rocks reflect, scientists can get an idea of what compounds are present. RELAB makes high-precision spectral measurements of samples for which the composition is already determined using other laboratory techniques. By doing that, the lab provides a ground truth for interpreting spectral measurements taken by spacecraft looking at other planetary bodies.

In poring through data from olivine samples examined over the years at RELAB, Kremer found something interesting hiding in a small swath of wavelengths that's overlooked by the kinds of spectroscopes that fly on orbital spacecraft.

Kremer found that those wavelengths, a band between four and eight microns, could predict the amount of magnesium or iron in an olivine sample to within about 10 percent of the actual content. That's far better than can be done when those wavelengths are ignored.

The researchers hope that this study, which is published in Geophysical Research Letters, might provide the impetus to build and fly a spectrometer that captures these previously overlooked wavelengths. Such an instrument could pay immediate dividends in understanding the nature of olivine deposits on the Moon's surface, Kremer says.

"The olivine samples brought back during the Apollo program that we've been able to study here on Earth vary widely in magnesium composition," Kremer said. "But we don't know how those differing compositions are distributed on the Moon itself, because we can't see those compositions spectroscopically. That's where this new technique comes in. If we could figure out a pattern to how those deposits are distributed, it could tell us something about the early evolution of the Moon."

There's the potential for other discoveries as well. The airplane-based SOFIA telescope is one of the few non-lab instruments that can look in this forgotten frequency range. The instrument's recent detection of water molecules in sunlit lunar surfaces made use of those frequencies.

"That makes the idea of space-borne spectrometers that can see this range much more attractive, both for water and for rocky material like olivine," Kremer said.

- This press release was originally published on the Brown University website