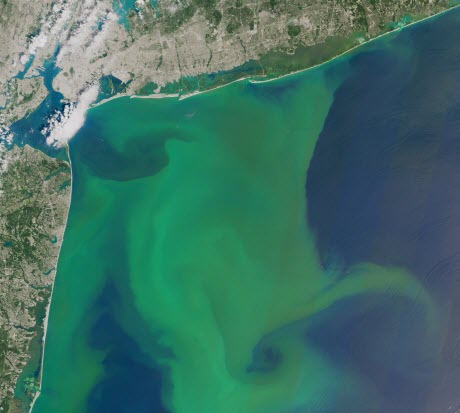 Phytoplankton bloom off the Atlantic coast that occurred in August 2015.Photo credit: NASA Earth Observatory image by Joshua StevensWashington, DC — If climate change is not curbed, increased precipitation could substantially overload U.S. waterways with excess nitrogen, according to a new study from the Carnegie Institution for Science's Eva Sinha and Anna Michalak and Princeton University's Venkatramani Balaji published by Science. Excess nutrient pollution increases the likelihood of events that severely impair water quality. The study found that impacts will be especially strong in the Midwest and Northeast.

Rainfall and other precipitation washes nutrients from human activities like agriculture and fossil fuel combustion into rivers and lakes. When these waterways get overloaded with nutrients, a phenomenon called "eutrophication," the results can be dangerous.

Harmful, toxin-producing algal blooms can develop, as well as dangerous low-oxygen dead zones called hypoxia. Over the past several years, dead zones and algal blooms in coastal regions across the United States—including the Gulf of Mexico, the Chesapeake Bay, and around Florida—have received extensive news coverage.

Sinha and Michalak wanted to look forward and use models to predict how climate change might increase eutrophication.

In the current study, they used these insights to predict how future changes to precipitation caused by climate change will, in and of themselves, impact nitrogen runoff and thereby increase the risk of water-quality impairment events in the U.S. To do so, they leveraged climate projections from 21 different climate models and looked at three possible future scenarios.

They found that if trends in greenhouse gas emissions follow a "business-as-usual" scenario, the resulting changes in climate would alter precipitation patterns in the U.S. and increase nutrient pollution by one-fifth by the end of the century. The effects would be particularly strong in the Corn Belt and in the Northeast.

Offsetting the increased amount of nitrogen being washed into the waterways would be an enormous task, requiring a whopping one-third reduction in overall nitrogen input such as fertilizer use.

"Our findings demonstrate that it is imperative that water-quality management strategies account for the impact of future precipitation changes on nitrogen loading," Michalak said.

Sinha and Michalak's model is specific to the US, but by seeking global analogues for the heavily affected areas found by their research, they identified India, China, and Southeast Asia as regions at high risk for large increases in nitrogen pollution due to increased precipitation.

"These are regions that more than half of the world's population calls home, so severe water-quality impairments could have serious impacts on a lot of lives," Sinha added.

"In the 1970s, we discovered human-caused eutrophication and took steps to reverse its course," says Tom Torgersen, director of the National Science Foundation's Water, Sustainability and Climate program, which funded the research. "As this paper shows, however, even seemingly minor climate variations can result in a return to the eutrophication of the past. Just to stay even, it will take more research to create better management strategies."