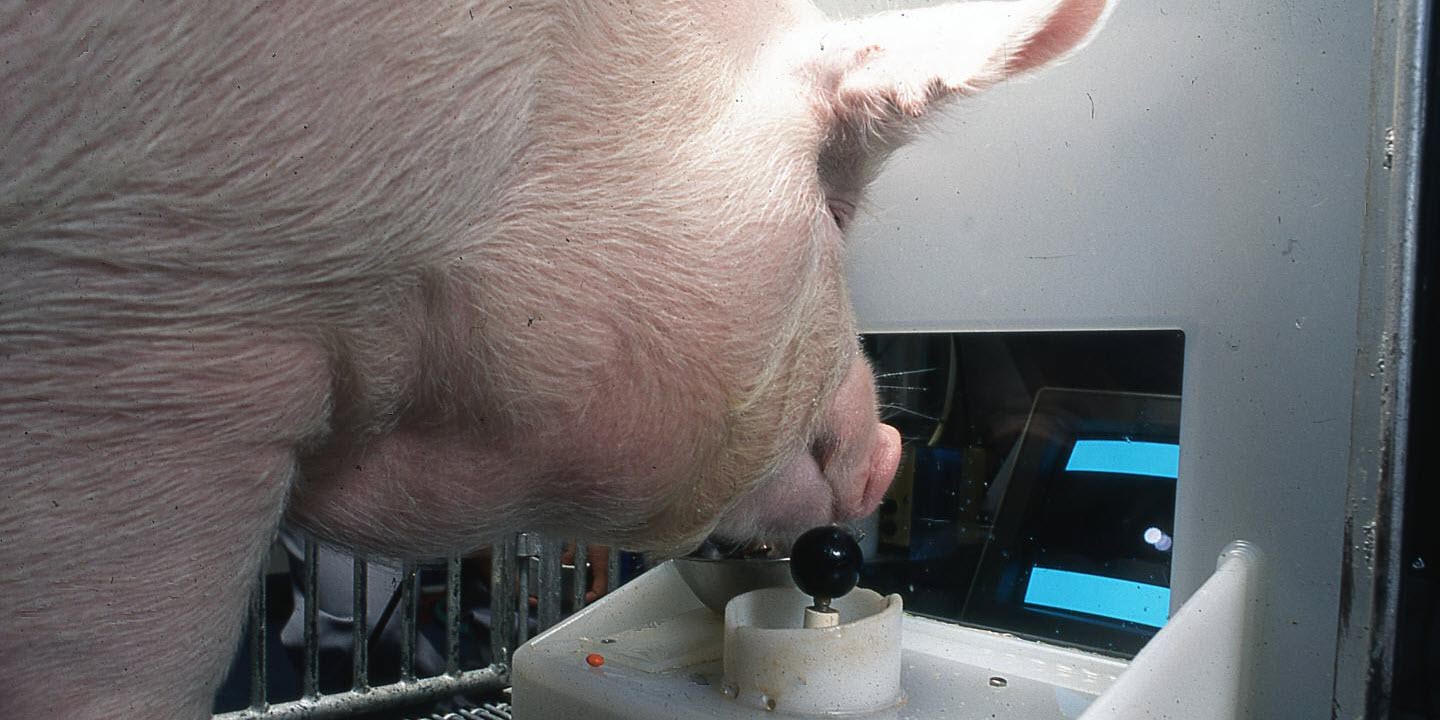 Pigs will probably never be able to fly, but new research is revealing that some species within the genus Sus may possess a remarkable level of behavioral and mental flexibility. A study published in Frontiers in Psychology tested the ability of four pigs to play a simple joystick-enabled video game. Each animal demonstrated some conceptual understanding despite limited dexterity on tasks normally given to non-human primates to analyze intelligence. 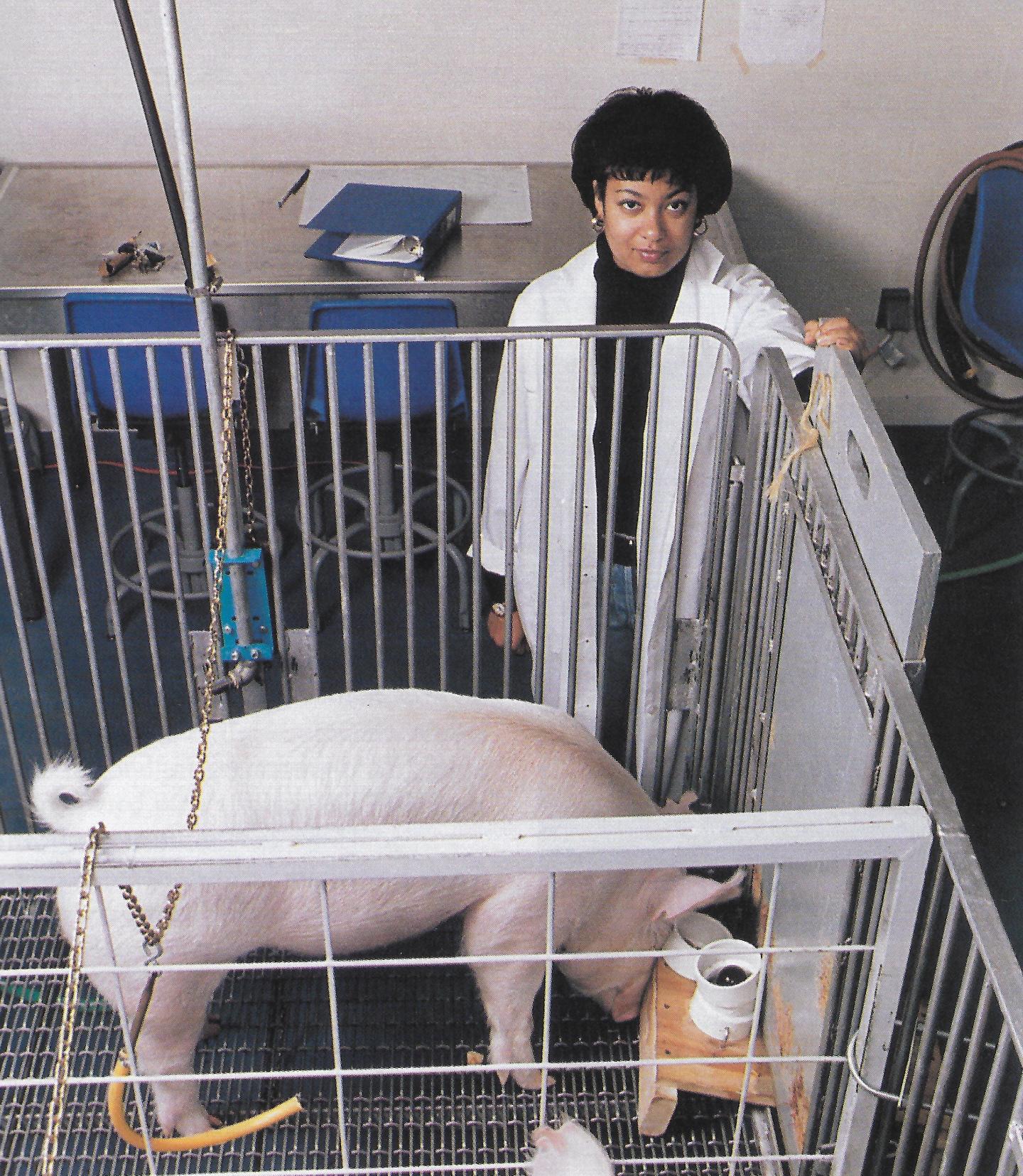 The study involved two Yorkshire pigs named Hamlet and Omelette, and two Panepinto micro pigs, Ebony and Ivory. All four animals were trained to approach and manipulate a joystick with their snouts in front of a computer monitor during the first phase of the experiment. They were then taught how to play a video game in which the goal was to move a cursor using the joystick toward up to four target walls on the screen.

Each pig performed the tasks well above chance, indicating the animal understood that the movement of the joystick was connected to the cursor on the computer screen. The fact that these far-sighted animals with no opposable thumbs could succeed at the task is "remarkable," according to the researchers.

"It is no small feat for an animal to grasp the concept that the behavior they are performing is having an effect elsewhere. That pigs can do this to any degree should give us pause as to what else they are capable of learning and how such learning may impact them," said lead author Dr. Candace Croney, a professor at Purdue University and director of the Purdue Center for Animal Welfare Science. Sarah T. Boysen, known for her work on chimpanzee cognition, co-authored the study.

Scientists already know that pigs are capable of various types of learning, from the same sort of basic obedience commands taught to dogs like "come" and "sit" to more complex behaviors that require them to change behaviors when the rules of the game change. One study has even shown that pigs can use mirrors to find hidden food in an enclosure, Croney noted.

In the current study, the team used food to teach and reinforce behaviors, but also found that social contact could strongly influence their persistence. For instance, when the machine dispensing treats failed to work, the pigs continued to make correct responses using only verbal and tactile cues. And only verbal encouragement seemed to help the animals during the most challenging tasks. 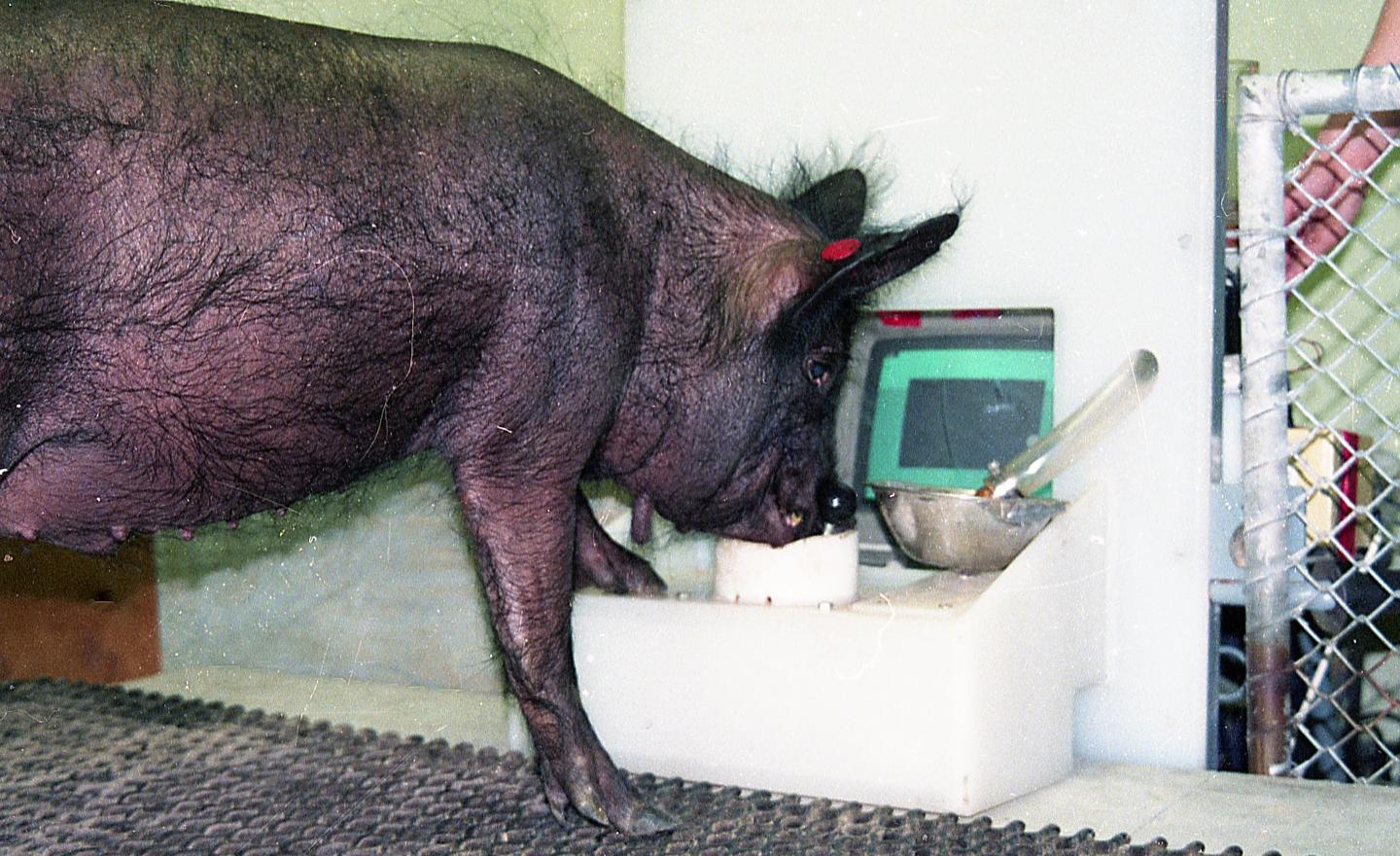 "This sort of study is important because, as with any sentient beings, how we interact with pigs and what we do to them impacts and matters to them," Croney said. "We therefore have an ethical obligation to understand how pigs acquire information, and what they are capable of learning and remembering, because it ultimately has implications for how they perceive their interactions with us and their environments."

While the pigs could not match the skill level of non-human primates on the video task and failed to meet the criteria used for primates to demonstrate full mastery of the concept, the researchers said the shortcomings could partially be explained by the nature of the experiment, which was designed for dexterous, visually-oriented mammals.

The study ended before the researchers could investigate a more ambitious goal: whether such a computer interface using symbols could be employed to communicate with the pigs more directly, as has been done with non-human primates.

"Informing management practices and improving pig welfare was and still is a major goal, but really, that is secondary to better appreciating the uniqueness of pigs outside of any benefit we can derive from them," Croney said.