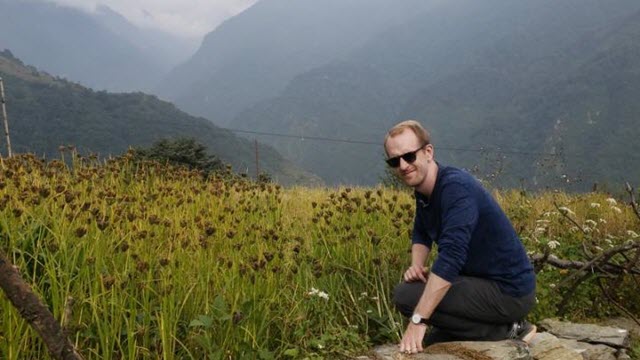 UD assistant professor Kyle Davis sits near a millet field in the Himalayan foothills. Davis led a study that shows how India can improve nutrition, climate resilience, and the environment by diversifying its crop production.Credit: Photo courtesy of Kyle Davis

When the Green Revolution came to India, it brought with it an emphasis on high-yielding varieties of rice and wheat, which allowed India to triple its cereal production over the past 50 years. As a result, rice contributes almost half of the country's cereal production, and cereals continue to make up much of the calorie consumption in India's urban and rural households.

But that success has led to two new problems: rice does not offer the nutritional benefits of some other cereals, such as sorghum and millets, and at the same time, it is grown in areas that are not necessarily suited to rice production, which can have adverse environmental impacts.

A new study from the University of Delaware published in the Proceedings of the National Academy of Sciences shows that India can sustainably enhance its food supply and improve its environmental footprint by reducing its reliance on rice and planting more nutritious and less environmentally damaging crops such as sorghum, finger millet, and pearl millet.

The study was led by Kyle Davis, assistant professor in the College of Earth, Ocean and Environment's Department of Geography and Spatial Sciences and the College of Agriculture and Natural Resources' Department of Plant and Soil Sciences. Davis explained that while the reliance on rice during the Green Revolution succeeded in feeding a large population, it also pushed out a lot of traditional cereals that are still consumed in India but to a lesser extent.

"We've found that those traditional cereals have a higher nutritional quality and also tend to use less water, require less energy to be grown, and emit fewer greenhouse gases on a per kilogram basis," said Davis.

Because rice is flood irrigated, it requires a lot of water, which is a burden in a country like India that is experiencing widespread depletion of groundwater resources.

In addition, the standing water in rice fields contributes to anaerobic respiration, which causes methane, a potent greenhouse gas, to be emitted to the atmosphere. Since the other cereals are not flood irrigated, their production does not produce any methane emissions.

"These traditional cereals also tend to be less sensitive to variability in temperature and precipitation so they're more resilient to climate variability," said Davis. "There are also many places where the yields of these cereals are comparable to or higher than rice. For all of those reasons, we wanted to look at whether there were opportunities to replace some rice production with some of these traditional cereals without reducing food supply in the country."

Sorghum and millets were consumed more widely in India a generation ago, and the government in India is interested in promoting the production and consumption of these different crops, even going so far as to declare 2018 the national year of millets. Davis said that this study can help the government in deciding which regions would benefit the most from promotion of these cereals.

"Our study provides a lot of value because we're able to pinpoint which districts in which states could see the largest improvements," said Davis. "If the government had to prioritize a few states, they could point to our results and say for example 'Ok, these are the places where our largest water savings are going to happen so we should focus here.' "

The next steps in implementing a more widespread planting of sorghum and millets would be to quantify the willingness of local populations to increase the amount of these different cereals in their diets.

The government would also have to make economic considerations to protect the livelihoods of farmers, as asking a farmer to switch to a different crop might mean that they have different fertilizer requirements or would have to buy more seed. Davis said that there are multiple government subsidy programs in India that help support farmers, but those would have to be modified to make sure that they accommodate the changes.

Finally, Davis said that while they only looked at decreasing some of the rice area and increasing some of the area allocated to these other cereals, it's also possible that India might look at areas that are currently used to produce cotton or sugarcane, water-intensive crops that don't contribute to nutrition, and replace them with sorghum and millets.

All of this could have positive environmental and nutritional benefits and Davis said that he was happy to lead a study that shows the positive impact agriculture can have on the planet.

"This was an India-focused study, but it makes a broader statement about sustainable agriculture and framing agriculture as a solution to multiple global challenges like malnutrition, water scarcity, and greenhouse gas," said Davis. "You often see agriculture presented as causing environmental problems, when in fact agriculture is the solutions to many challenges. Our study shows there are opportunities to realize a number of different benefits through more thoughtful agricultural practices, and it shows that a single intervention can change multiple outcomes for the better."

A Cereal Survives Heat and Drought

A Cereal Survives Heat and Drought