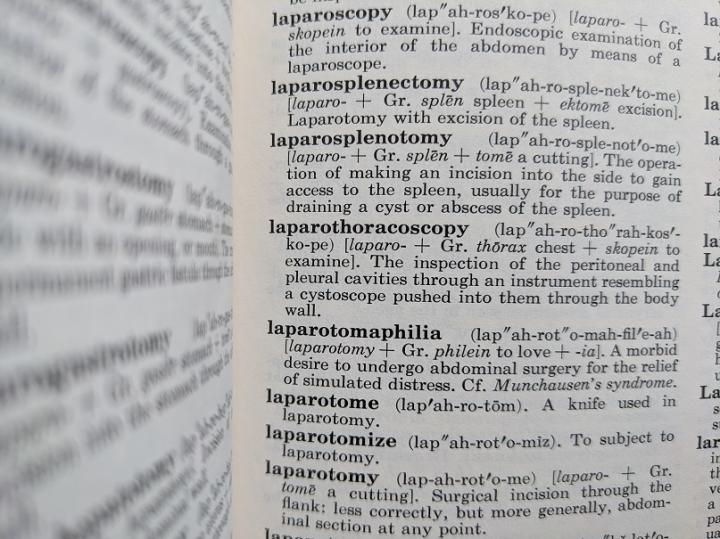 You can say "laparoscopy"—or you could say "minimally invasive surgery."
Ohio State University

COLUMBUS, OH — When scientists and others use their specialized jargon terms while communicating with the general public, the effects are much worse than just making what they're saying hard to understand.

In a new study, people exposed to jargon when reading about subjects like self-driving cars and surgical robots later said they were less interested in science than others who read about the same topics, but without the use of specialized terms.

They were also less likely to think they were good at science, felt less informed about science and felt less qualified to discuss science topics.

Crucially, it made no difference if the jargon terms—like "vigilance decrement" and "laparoscopy"—were defined in the text: Even when the terms were defined, readers still felt just as disengaged as readers who read jargon that wasn't explained.

The problem is that the mere presence of jargon sends a discouraging message to readers, said Hillary Shulman, lead author of the study and assistant professor of communication at Ohio State University (OSU).

"The use of difficult, specialized words are a signal that tells people that they don't belong," Shulman said.

"You can tell them what the terms mean, but it doesn't matter. They already feel like that this message isn't for them."

This new study is the latest in a series by Shulman and her colleagues that shows how complex language in politics, as well as science, can lead people to tune out.

"Politics is where I started," Shulman said.

"We have found that when you use more colloquial language when talking to people about issues like immigration policy, they report more interest in politics, more ability to understand political information and more confidence in their political opinions."

Shulman and colleagues have now studied language and public engagement involving about 20 different political and science topics, all with the same results.

"We can get citizens to engage with complex political and scientific issues if we communicate to them in language that they understand," she said.

The latest study was published online recently in the Journal of Language and Social Psychology and will appear in a future print edition.

In the study, 650 adults participated online. They read a paragraph about each of three science and technology topics: self-driving cars, surgical robots, and 3D bio-printing.

For example, one of the sentences in the high-jargon version of the surgical robots paragraph read: "This system works because of AI integration through motion scaling and tremor reduction."

Related Article: What Makes Someone Believe or Reject Science?

The no-jargon version of that same sentence read: "This system works because of programming that makes the robot's movements more precise and less shaky."

Half of the people who read the high-jargon versions were also offered the opportunity to see the jargon terms defined. When they held their computer mouse over an underlined jargon term, a text box appeared with the definition—the exact language used in the no-jargon version.

After reading each paragraph, participants rated how easy it was to read.

After they read all three paragraphs, participants completed a variety of measures examining issues like their interest in science and how much they thought they knew about science.

As expected, participants who read the high-jargon paragraphs thought they were more difficult to read than did those who read the no-jargon descriptions—even if they had the definitions available to them.

"What we found is that giving people definitions didn't matter at all - it had no effect on how difficult they thought the reading was," Shulman said.

Being exposed to jargon had a variety of negative effects on readers, the study showed.

"Exposure to jargon led people to report things like 'I'm not really good at science,' 'I'm not interested in learning about science,' and 'I'm not well qualified to participate in science discussions,'" Shulman said.

"They were more likely to say they understood what they read because they were a science kind of person, that they liked science, and considered themselves knowledgeable."

There's an even darker side, though, to how people react when they are exposed to jargon-filled explanations of science.

In an earlier study with these same participants, published in the journal Public Understanding of Science, the researchers found that reading jargon led people to not believe the science.

"When you have a difficult time processing the jargon, you start to counter-argue. You don't like what you're reading. But when it is easier to read, you are more persuaded and you're more likely to support these technologies," she said.

"You can see how important it is to communicate clearly when you're talking about complex science subjects like climate change or vaccines."

Shulman said that the use of jargon is appropriate with scientific audiences. But scientists and science communicators who want to communicate with the public need to modify their language, beginning with eliminating jargon.

"Too many people think that if they just define their terms, everything is set. But this work shows that is not the case."

- This press release was originally published on OSU's news website