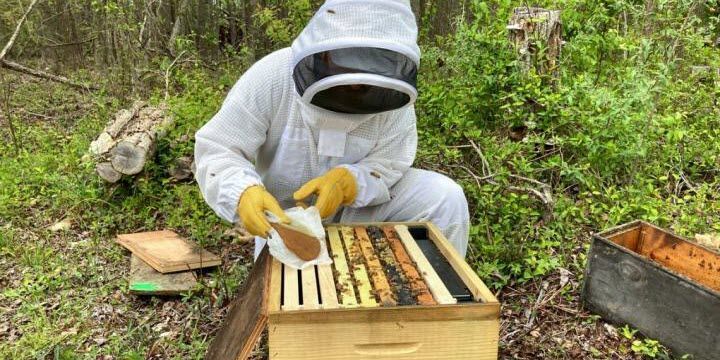 ITHACA, NY —  A Cornell University-developed technology provides beekeepers, consumers, and farmers with an antidote for deadly pesticides, which kill wild bees and cause beekeepers to lose around a third of their hives every year on average.

An early version of the technology—which detoxified a widely-used group of insecticides called organophosphates—is described in a new study, "Pollen-Inspired Enzymatic Microparticles to Reduce Organophosphate Toxicity in Managed Pollinators," published in Nature Food. The antidote delivery method has now been adapted to effectively protect bees from all insecticides, and has inspired a new company, Beemmunity, based in New York state.

Studies show that wax and pollen in 98 percent of hives in the US are contaminated with an average of six pesticides, which also lower a bee's immunity to devastating varroa mites and pathogens. At the same time, pollinators provide vital services by helping to fertilize crops that lead to production of a third of the food we consume, according to the paper.

"We have a solution whereby beekeepers can feed their bees our microparticle products in pollen patties or in a sugar syrup, and it allows them to detoxify the hive of any pesticides that they might find," said James Webb, a co-author of the paper and CEO of Beemmunity.

First author Jing Chen is a postdoctoral researcher in the lab of senior author Minglin Ma, associate professor in the Department of Biological and Environmental Engineering in the College of Agriculture and Life Sciences (CALS). Scott McArt, assistant professor of entomology in CALS, is also a co-author.

The paper focuses on organophosphate-based insecticides, which account for about a third of the insecticides on the market. A recent worldwide meta-analysis of in-hive pesticide residue studies found that, under current use patterns, five insecticides posed substantial risks to bees, two of which were organophosphates, McArt said.

The researchers developed a uniform pollen-sized microparticle filled with enzymes that detoxify organophosphate insecticides before they are absorbed and harm the bee. The particle's protective casing allows the enzymes to move past the bee's crop (stomach), which is acidic and breaks down enzymes.

Microparticles can be mixed with pollen patties or sugar water, and once ingested, the safe-guarded enzymes pass through the acidic crop to the midgut, where digestion occurs and where toxins and nutrients are absorbed. There, the enzymes can act to break down and detoxify the organophosphates.

After a series of in vitro experiments, the researchers tested the system on live bees in the lab. They fed a pod of bees malathion, an organophosphate pesticide, in contaminated pollen and also fed them the microparticles with enzyme. A control group was simultaneously fed the toxic pollen, without the enzyme-filled microparticles.

Bees that were fed the microparticles with a high dose of the enzyme had a 100 percent survival rate after exposure to malathion. Meanwhile, unprotected control bees died in a matter of days.

Beemmunity takes the concept a step further, where instead of filling the microparticles with enzymes that break down an insecticide, the particles have a shell made with insect proteins and are filled with a special absorptive oil, creating a kind of micro-sponge. Many insecticides, including widely-used neonicotinoids, are designed to target insect proteins, so the microparticle shell draws in the insecticide where it is sequestered inert within the casing. Eventually, the bees simply defecate the sequestered toxin.

The company is running colony-scale trials this summer on 240 hives in New Jersey and plans to publicly launch its products starting in February 2022. Products include microparticle sponges in a dry sugar medium that can be added to pollen patties or sugar water, and consumer bee feeders in development.

"This is a low-cost, scalable solution which we hope will be a first step to address the insecticide toxicity issue and contribute to the protection of managed pollinators," Ma said.

- This press release was originally published on the Cornell Chroniclewebsite. It has been edited for style