Idaho is well-known for potato production. According to the Idaho State Department of Agriculture, the state leads the nation in potato production, with nearly one-third of all US potatoes grown there. More than 30 varieties are harvested in the Gem State, including Yukon Golds, Reds, Fingerlings, and the Russet, also known as the “Idaho potato.” The crop flourishes particularly well in Idaho thanks to its warm days, cool evenings, and fertile volcanic soil.

Fittingly, the University of Idaho is home to a production laboratory on its Moscow campus that works closely with the seed potato industry to produce better, healthier tubers. The Seed Potato Germplasm Program (SPGP) offers products and services for customers in the seed potato industry, says Jenny Durrin, Seed Potato Germplasm program director, University of Idaho. “The products we produce are in vitro potato plantlets for greenhouse growers, soil-less minitubers for seed producers, and individual in vitro plantlets (germplasm) for other laboratories across the United States and world,” says Durrin. “The services we provide include establishing plants into tissue culture (in vitro), virus clean-up therapy, long-term germplasm storage, and garlic pathogen screening.” 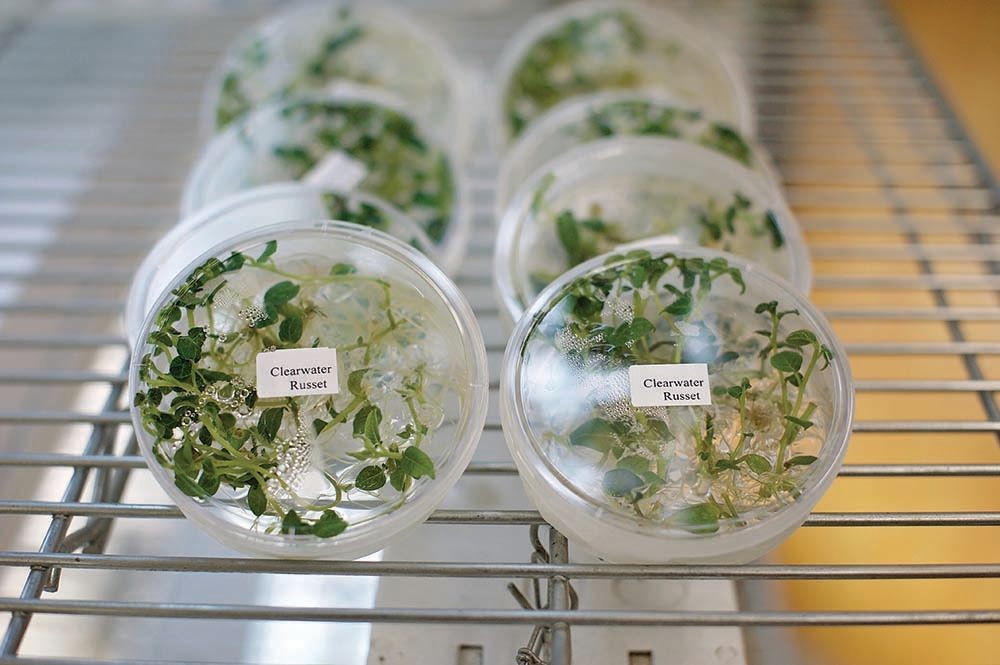 The SPGP lab houses a collection of more than 250 potato varieties. Russets are commonly known in the US as “Idaho potatoes.”
Jenny Durrin

The SPGP works within the University of Idaho’s College of Agricultural and Life Sciences to establish, maintain, and distribute disease-free germplasm and minitubers, which are utilized by both domestic and international seed potato growers as well as researchers. It’s the only lab that maintains the entire collection of Potato Variety Management Institute (PVMI) lines. The PVMI was established in 2005 by the state potato commissions of Washington, Oregon, and Idaho to manage the licensing and royalty collection on Tri-State potato varieties. The SPGP also has the only lab that performs virus clean-up of new experimental lines that enter the Tri-State program. The lab cleans, maintains, and distributes these experimental lines to growers and researchers. It’s this large collection of potato varieties (more than 250 in total) that makes the SPGO lab unique, says Durrin.

“The collection includes clean versions of experimental varieties that don’t exist anywhere else in the world. We send germplasm to other laboratories all over the world,” she says, adding that the SPGP is the “industry leader in virus clean-up therapy for potatoes,” through a long process that rids plants of potato viruses by using a virus inhibitor and heat cycles. “We produce minitubers using no soil. Instead, we grow in perlite and use a nutrient solution. The research we conduct is open and available to anyone that contacts the program. We are working toward optimizing production of this high-value crop, and sharing this information to others in the industry is paramount to our mission,” Durrin says. 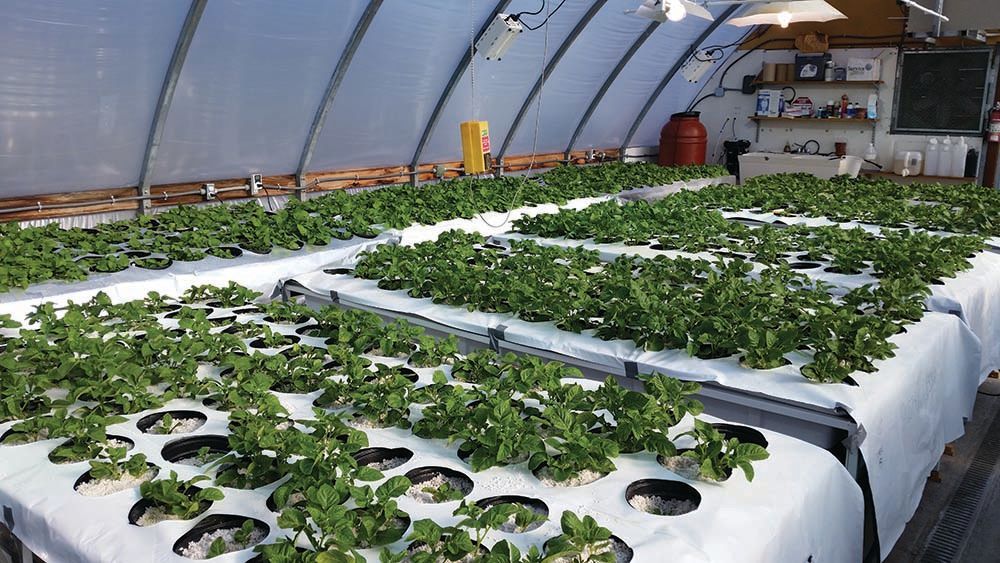 The research done by the SPGP is funded by the sales of their products and services to the seed potato industry. This research includes optimizing conditions for potato in vitro plantlets, which includes media and lighting conditions. Durrin says that her lab has developed an ebb and flow hydroponic system used to grow minitubers in a greenhouse. “Potatoes are not usually grown hydroponically, and developing this system took time and research into the different nutrient formulations,” says Durrin.

Additionally, the lab is currently experimenting with a controlled environment project where potatoes are grown under artificial LED lighting rather than sunlight. “Our work has shown the importance of light density and duration for optimum tuber production in a controlled environment system,” Durrin says. “We are able to eliminate sunlight from the growing requirements. Eliminating sunlight increases control over the plants and subsequently leads to much higher yields. We are able to produce 150 percent more tubers in the same space as before.”

Growth like this is among the reasons why the lab will soon be moving to a new location. The SPGP, originally housed in a corner of the university’s Agricultural Science Building, plans to move into a new lab building by July 2021. “The laboratory is moving into a multi-million-dollar stand-alone facility that will house a quarantine lab, micropropagation lab, and four growth chambers. We will continue to produce a high-quality product for our customers, and we will be able to do it on a larger scale. Future research in the new space will include more work into lighting and humidity for in vitro plantlets,” says Durrin. She adds that she also plans to bring in new species and work at storing germplasm for these species of plants. Her future plans include a germplasm repository for garlic to help establish a clean garlic network free from pathogens. 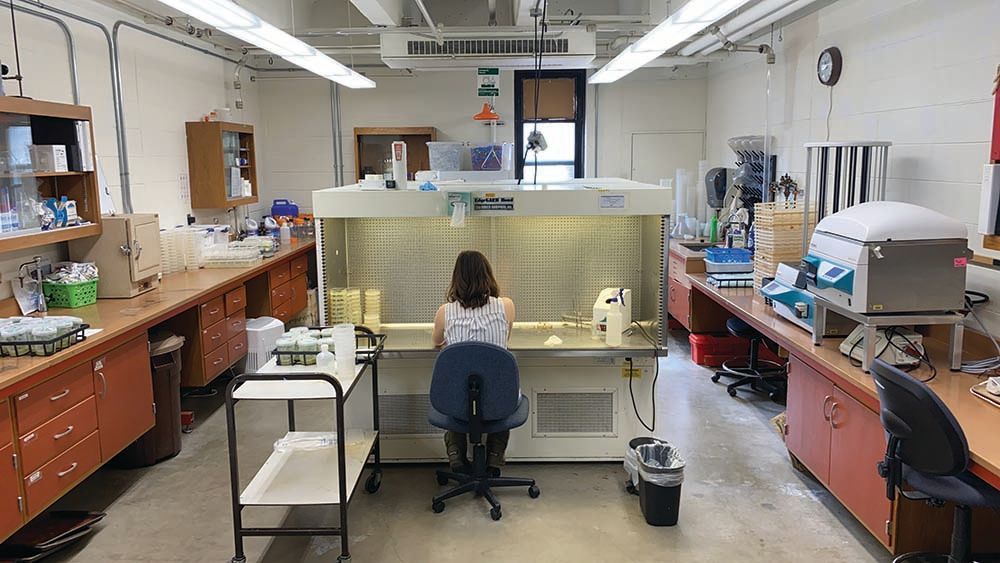 The new lab facility plans to increase production threefold within the next five years, which is expected to lead to an increase in revenue to help keep the lab’s technology on the cutting edge, as well as fund student training and education via internships. The stand-alone lab—funded through the Idaho Potato Commission, Northwest Farm Credit Services, private donors, and the State of Idaho—will ensure the program’s biosafety since it will enable isolation from the research that’s being conducted on potato pathogens. Increased cold storage capacity will support enhanced production of current varieties to meet industry needs, while also allowing for broader development of new varieties.

The lab’s main goal is to produce the highest quality in vitro plantlets and minitubers possible, especially considering the costs of these products to their seed potato industry partners. “We produce about 200,000 in vitro plantlets per year, distributed in petri plates. Plantlets sell for 68 cents per plant. Minitubers are produced in a greenhouse under strict guidelines without soil. Minitubers are sold for $38 per pound. With this high cost comes a responsibility to produce a high-quality product free from pathogens,” says Durrin. She adds, “Other goals include educating the industry about the best practices for growing minitubers and sharing our production research with the industry.” 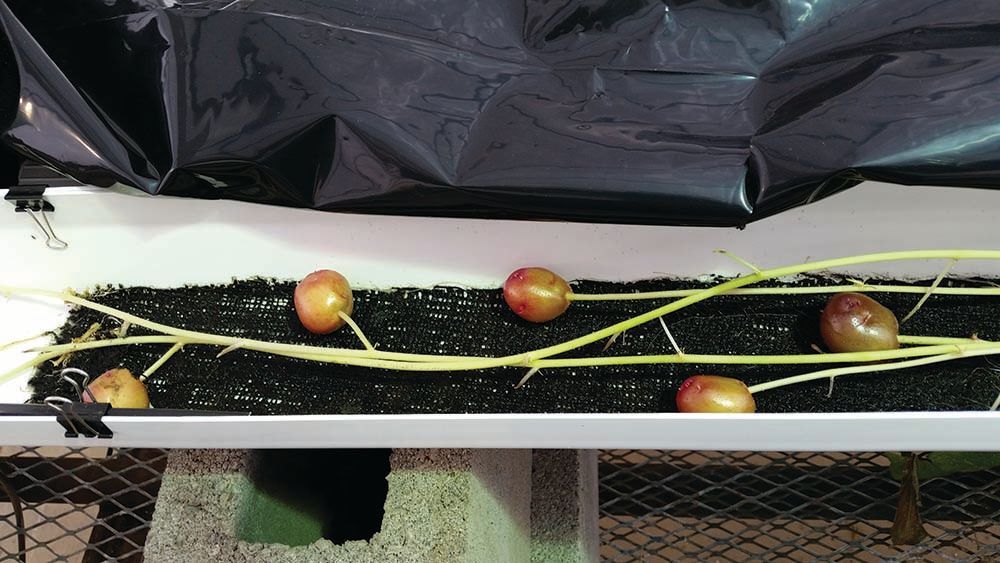 The SPGP uses a nutrient film technique to develop minitubers. Because tissue culture plants don’t perform well when planted into field soil, they are instead planted into greenhouses using this hydroponic technique.
JENNY DURRIN

Working with living organisms can be challenging, says Durrin, because the different potato varieties don’t all respond to treatments in the same way. “Some varieties respond quickly to virus clean-up therapies while others struggle significantly. Some varieties respond well to a new nutrient formulation while others struggle to produce higher yields,” she says. “The work is challenging in this way, and each day is a learning opportunity.”

In addition to the learning opportunities, the seed potato program also provides Durrin with the chance to interact with industry professionals and improve both their personal experience and their crops. “I enjoy talking with seed potato farmers and producing a high-quality product for them that makes their jobs easier,” says Durrin. “On a strictly science basis, my favorite part of the lab is working with the plants and understanding on a deep level what makes them do what they do. Understanding the way they react in vitro to different stimuli versus in the greenhouse is fascinating. Learning how to push the plants to produce as high yields as possible creates an understanding of their inner workings that you can’t get anywhere else.”