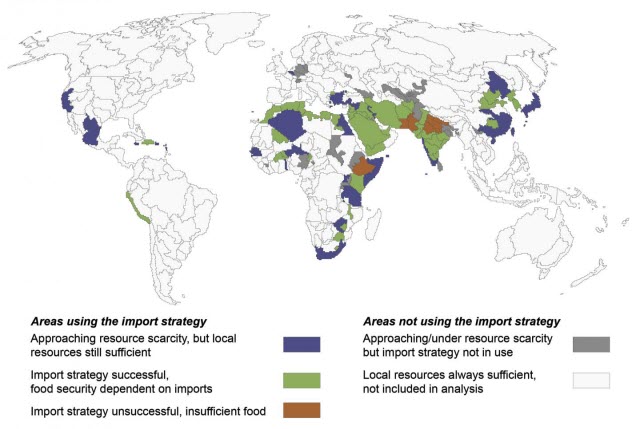 The Earth's capacity to feed its growing population is limited—and unevenly distributed. An increase in cultivated land and the use of more efficient production technology are partly buffering the problem, but in many areas it is instead solved by increasing food imports. For the first time, researchers at Aalto University have been able to show a broad connection between resource scarcity, population pressure, and food imports, in a study published in Earth's Future.

"Although this has been a topic of global discussion for a long time, previous research has not been able to demonstrate a clear connection between resource scarcity and food imports. We performed a global analysis focusing on regions where water availability restricts production, and examined them from 1961 until 2009, evaluating the extent to which the growing population pressure was met by increasing food imports," explains postdoctoral researcher Miina Porkka.

The researchers' work combined modelled data with FAO statistics and also took into consideration increases in production efficiency resulting from technological development. The analysis showed that in 75 percent of resource-scarce regions, food imports began to rise as the region's own production became insufficient.

Even less wealthy regions relied on the import strategy—but not always successfully. According to the research, the food security of about 1.4 billion people has become dependent on imports and an additional 460 million people live in areas where increased imports are not enough to compensate for the lack of local production.

The big issue, says co-author Dr. Joseph Guillaume, is that people may not even be aware that they have chosen dependency on imports over further investment in local production or curbing demand.

"It seems obvious to look elsewhere when local production is not sufficient, and our analysis clearly shows that is what happens. Perhaps that is the right choice, but it should not be taken for granted."

The international food system is sensitive and price and production shocks can spread widely and undermine food security—especially in poorer countries that are dependent on imports. As a result, further investments in raising production capacity could be a viable alternative. Especially in sub-Saharan Africa and India, there are opportunities to sustainably improve food production by, for example, more efficient use of nutrients and better irrigation systems. Porkka emphasises that the solutions will ultimately require more than just increasing food production.

"Keeping food demand in check is the key issue. Controlling population growth plays an essential role in this work, but it would also be important to enhance production chains by reducing food waste and meat consumption. Since one quarter of all the food produced in the world is wasted, reducing this would be really significant on a global level."