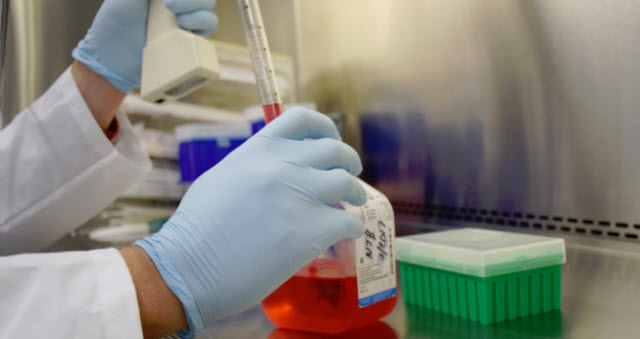 There is no vaccine currently available for salmonella poisoning. Antibiotics are the first choice in treating salmonella infections, but the fact that some strains of salmonella are quickly developing antibiotic resistance is a serious concern. Photo courtesy of The University of Texas Medical Branch at Galveston

GALVESTON, Texas - Researchers from The University of Texas Medical Branch at Galveston have developed a vaccine against salmonella poisoning designed to be taken by mouth. The findings are detailed in an article published in Frontiers in Cellular and Infection Microbiology.

In earlier studies, the UTMB researchers developed potential vaccines from three genetically mutated versions of the salmonella bacteria, that is Salmonella Typhimurium, that were shown to protect mice against a lethal dose of salmonella. In these studies, the vaccines were given as an injection.

However, oral vaccination is simplest and least invasive way to protect people against salmonella infection. Taking this vaccine by mouth also has the added advantage of using the same pathway that salmonella uses to wreak havoc on the digestive system.

"In the current study, we analyzed the immune responses of mice that received the vaccination by mouth as well as how they responded to a lethal dose of salmonella, said Ashok Chopra, UTMB professor of microbiology and immunology. "We found that the orally administered vaccines produced strong immunity against salmonella, showing their potential for future use in people."

There is no vaccine currently available for salmonella poisoning. Antibiotics are the first choice in treating salmonella infections, but the fact that some strains of salmonella are quickly developing antibiotic resistance is a serious concern. Another dangerous aspect of salmonella is that it can be used as a bioweapon—this happened in Oregon when a religious cult intentionally contaminated restaurant salad bars and sickened 1,000 people.

Salmonella is responsible for one of the most common food-borne illnesses in the world. In the US alone, the Centers for Disease Control and Prevention estimates that there are about 1.4 million cases with 15,000 hospitalizations and 400 deaths each year. It is thought that for every reported case, there are approximately 39 undiagnosed infections. Overall, the number of salmonella cases in the US has not changed since 1996.

Salmonella infection in people with compromised immune systems and children under the age of three are at increased risk of invasive non-typhoidal salmonellosis, which causes systemic infection. There are about one million cases globally per year, with a 25 percent fatality rate.