Cold Spring Harbor, NY — On August 19th, neuroscientists published in Neuron details of a revolutionary new way of mapping the brain at the resolution of individual neurons, which they have successfully demonstrated in the mouse brain.

The new method, called MAPseq (Multiplexed Analysis of Projections by Sequencing), makes it possible in a single experiment to trace the long-range projections of large numbers of individual neurons from a specific region or regions to wherever they lead in the brain—in experiments that are many times less expensive, labor-intensive and time-consuming than current mapping technologies allow.

Although a number of important brain-mapping projects are now under way, all of these efforts to obtain “connectomes,” or wiring maps, rely upon microscopes and related optical equipment to trace the myriad thread-like projections that link neurons to other neurons, near and far. For the first time ever, MAPseq “converts the task of brain mapping into one of RNA sequencing,” says its inventor, Anthony Zador, MD, PhD, professor at Cold Spring Harbor Laboratory.

Related Article: Map Provides Detailed Picture of How the Brain Is Organized

“The RNA sequences, or ‘barcodes,’ that we deliver to individual neurons are unmistakably unique,” Zador explains, “and this enables us to determine if individual neurons, as opposed to entire regions, are tailored to specific targets.”

An injection into a “source” region of the brain contains a viral library encoding a diverse collection of barcode sequences, which are hitched to an engineered protein that is designed to carry the barcode along axonal pathways. The barcode RNA is expressed at high levels and transported into the terminals of axons in the source region where the injection is made. In each neuron, it travels to the point where the axon forms a synapse with a projection from another neuron.Image courtesy of Cold Spring Harbor Laboratory

MAPseq differs from so-called “bulk tracing” methods now in common use, in which a marker—typically a fluorescent protein—is expressed by neurons and carried along their axons. Such markers are good at determining all of the regions where neurons in the source region project to, but they cannot tell scientists that any two neurons in the source region project to the same region, to different regions, or to some of the same regions, and some different ones. That inability to resolve a neuron’s axonal destinations, cell by cell in a given region, is what motivated Zador to come up with a new technique. 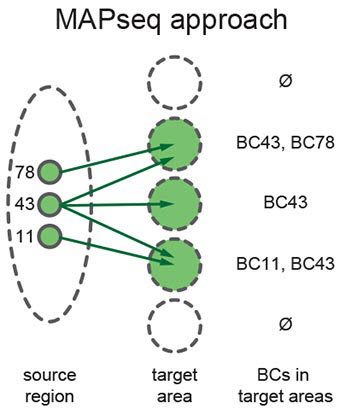 "Bulk" labeling methods now widely in use to map brain connections are able to determine that neurons in the "source" region (left side) project to three green-shaded regions (right side), but are not able to distinguish the specific destinations of individual neurons in the source region. MAPseq enables such distinction -- in this example, showing that neurons bearing specific "barcodes" (vastly reduced in complexity here for demonstration purposes) carry those barcodes to some of the 3 "destinations" but not necessarily all of them, or the same ones as other neurons in the source region.Image courtesy of Cold Spring Harbor LaboratoryOne way of explaining the advantage of MAPseq over bulk tracing methods is to imagine being at an international airport, with the intention of getting on a flight to, say, Germany. “If you go to the international terminal, you see a long line of ticket counters,” Zador explains. “If you want to go to Germany, it’s not enough to take any airline at the international terminal. If you stand in line at the counter for Air Chile, you’re probably not going to be able to buy a ticket for Germany.”

“Those many airlines whose counters are adjacent serve many destinations, some of which overlap, some of which are unique. You can print out a map showing all of the foreign countries that all of the airlines serve from your airport, but that doesn’t tell you anything at all about individual airlines and where they go. This is the difference between current labeling methods and MAPseq. The ‘individual airlines’ in my example are adjacent neurons in a part of the brain whose ‘routes’ we want to trace.”

Zador and his team, including Justus Kebschull, a graduate student in his lab who is first author on the Neuron paper introducing the new method, have spent several years working out a technology that enables them to assign unique barcode-like identifiers to large numbers of individual neurons via a single injection in any brain region of interest. Each injection consists of a deactivated virus that has been engineered to contain massive pools of individually unique RNA molecules, each of whose sequence—consisting of 30 “letters,” or nucleotides—is taken up by single neurons. Thirty letters yields many, many times more barcode sequences (1018) than there are neurons in either the mouse or human brain, so this method is especially well suited to the massive complexity problem that brain mapping presents.

An injection into a “source” region of the brain contains a viral library encoding a diverse collection of barcode sequences, which are hitched to an engineered protein that is designed to carry the barcode along axonal pathways. The barcode RNA is expressed at high levels and transported into the terminals of axons in the source region where the injection is made. In each neuron, it travels to the point where the axon forms a synapse with a projection from another neuron. Tests show that the technology works—the barcodes travel reliably and evenly throughout the brain, along the “trunklines” that are the axons, and out to the “branch points” where synapses form.

About two days after one or more injections are made in a region of interest, the brain is dissected and RNA is collected and sequenced. RNA barcodes in the “source” area are now matched with the same barcodes collected in distant parts of the brain.

To demonstrate MAPseq’s capabilities, Zador’s team injected a part of the mouse brain called the locus coeruleus (LC), located in the brain stem. After nearly 2 days, the cortex was divided in 22 slices, dissected and sequenced for RNA barcodes. The sequence readouts were matched with barcodes of cells in the region of the initial injection, establishing specific paths of individual LC neurons.Image courtesy of Cold Spring Harbor Laboratory

“Sequencing the RNA is a highly efficient, automated process, which makes MAPseq such a potentially radical tool,” Kebschull says. “In addition to the speed and economy of RNA sequencing, it has the great advantage of making it possible for researchers to distinguish between individual neurons within the same region that project to different parts of the brain.”

To demonstrate MAPseq’s capabilities, Zador’s team injected a part of the mouse brain called the locus coeruleus (LC), located in the brain stem. It is the cortex’s sole source of noradrenaline, a hormone that signals surprise. Zador’s team used MAPseq to address an old question: does the “surprise” signal get broadcast everywhere in the cortex, or only to particular places, where, perhaps, it is most needed or relevant?

In their demonstration experiment, only RNA that ended up in the cortex or olfactory bulb was sequenced, along with that of the source region in the LC where the barcodes were originally injected. The team divided the cortex into 22 slices, each about 300 microns thick, and dissected the slices. The results were exciting to the team.

“We found that neurons in the LC have a variety of idiosyncratic projection patterns,” Zador says. “Some neurons project almost exclusively to a single preferred target in the cortex or olfactory bulb. Other neurons project more broadly, although weakly.”

These results, he adds, “are consistent with, and reconcile, previous seemingly contradictory results about LC projections.” The surprise signal can reach most parts of the brain, but there are very specific parts of the brain where the signal is especially focused.

“Once we automate the process of using many injections, we think this kind of experiment can be completed by a single person in just a week or two, and at a cost of only a few thousand dollars,” Zador says. “We are very keen on being able to do these kind of studies in a single animal, which will eliminate the past problem of injecting multiple animals to trace multiple neurons, a method that requires one to make a single map based on many brains, each of which is somewhat different.”

Zador’s next goal with MAPseq is to map the brains of animals that model various neurodevelopmental and neuropsychiatric illnesses, to see how gene mutations strongly associated with causality alter the structure of brain circuits, and thus, presumably, brain function.