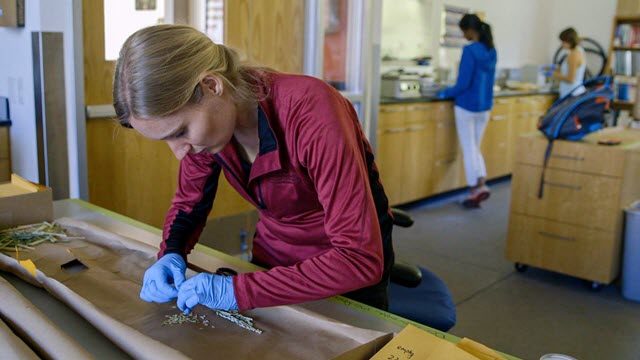 E. Marie Muehe removes rice grains from stalks so they can be weighed for yield and analyzed for arsenic content and other nutritional information.Credit: Kurt Hickman/Stanford News Service

Rice is the largest global staple crop, consumed by more than half the world's population—but new experiments from Stanford University suggest that with climate change, production in major rice-growing regions with endemic soil arsenic will undergo a dramatic decline and jeopardize critical food supplies.

These experiments exploring rice production in future climate conditions show rice yields could drop about 40 percent by 2100—with potentially devastating consequences in parts of the world that rely on the crop as a basic food source. What's more, changes to soil processes due to increased temperatures will cause rice to contain twice as much toxic arsenic than the rice consumed today. The research was published Nov. 1 in Nature Communications.

"By the time we get to 2100, we're estimated to have approximately 10 billion people, so that would mean we have 5 billion people dependent on rice, and 2 billion who would not have access to the calories they would normally need," said co-author Scott Fendorf, the Terry Huffington Professor in Earth system science at Stanford University's School of Earth, Energy & Environmental Sciences (Stanford Earth). "We have to be aware of these challenges that are coming so we can be ready to adapt."

The researchers specifically looked at rice because it is grown in flooded paddies that help loosen the arsenic from the soil and make it especially sensitive to arsenic uptake. While many food crops today contain small amounts of arsenic, some growing regions are more susceptible than others. Future changes in soil due to higher temperatures combined with flooded conditions cause arsenic to be taken up by rice plants at higher levels—and using irrigation water with naturally occurring high arsenic exacerbates the problem. While these factors will not affect all global commodities in the same way, they do extend to other flood-grown crops, like taro and lotus.

"I just didn't expect the magnitude of impact on rice yield we observed," said Fendorf, who is also a senior fellow at the Stanford Woods Institute for the Environment. "What I missed was how much the soil biogeochemistry would respond to increased temperature, how that would amplify plant-available arsenic, and then—coupled with the temperature stress—how that would really impact the plant."

A naturally occurring, semi-metallic chemical, arsenic is found in most soils and sediments, but is generally in a form that doesn't get taken up by plants. Chronic exposure to arsenic leads to skin lesions, cancers, aggravation of lung disease and, ultimately, death. It is especially concerning in rice not only because of its global significance, but also because the low-allergen food is often introduced early to infants.

"I think this problem is also crucial for people that have young kids in our society," said lead author E. Marie Muehe, a former postdoctoral scholar at Stanford and now at the University of Tübingen, Germany. "Because infants are a lot smaller than we are, if they eat rice, that means that they take up more arsenic relative to their body weight."

The researchers created future climate conditions in greenhouses based on estimates of a possible 5 degree Celsius temperature increase and twice as much atmospheric carbon dioxide by 2100, as projected by the Intergovernmental Panel on Climate Change.

While previous research examined the impacts of increasing temperature in the context of the global food crisis, this study was the first to account for soil conditions in combination with shifts in climate.

For the experiments, the group grew a medium-grain rice variety in soil from the rice-growing region of California. The greenhouses were controlled for temperature, carbon dioxide concentrations and soil arsenic levels, which will be higher in the future due to its buildup in soils from irrigating crops with arsenic-contaminated water, a problem that is worsened by over-pumping groundwater.

"We don't often think about this, but soil is alive—it's teeming with bacteria and a lot of different microorganisms," Fendorf said. "It turns out those microorganisms determine whether the arsenic stays partitioned onto the minerals and away from the plants or comes off the minerals into the water phase."

The researchers found that with increased temperatures, microorganisms destabilized more of the soil's inherent arsenic, leading to greater amounts of the toxin in the soil water that is available for uptake by the rice. Once taken up, arsenic inhibits nutrient absorption and decreases plant growth and development, factors that contributed to the 40 percent decrease in yield the scientists observed.

While the dramatic loss in production is a major cause for concern, the scientists are hopeful that this research will help producers find potential solutions for feeding the world.

"The good news is that given past advances in terms of the global community's ability to breed varieties that can adapt to new conditions, along with revisions to soil management, I'm optimistic we can get around the problems observed in our study," Fendorf said. "I'm also optimistic that as we continue to shine a light on the threats resulting from a 5 degree Celsius change, society will adopt practices to ensure we never reach that degree of warming."

As next steps, Fendorf, co-author Tianmei Wang and Muehe hope to asses rice yields on a global scale by using remote sensing to pinpoint contaminated rice paddies in order to model future yields and arsenic contamination.

"This is most likely to be a problem where most rice is consumed, so we think about South and East Asia," said Wang, a PhD candidate in Earth system science. "Especially for people like my dad—he consumes rice three times a day and he just cannot live without it."