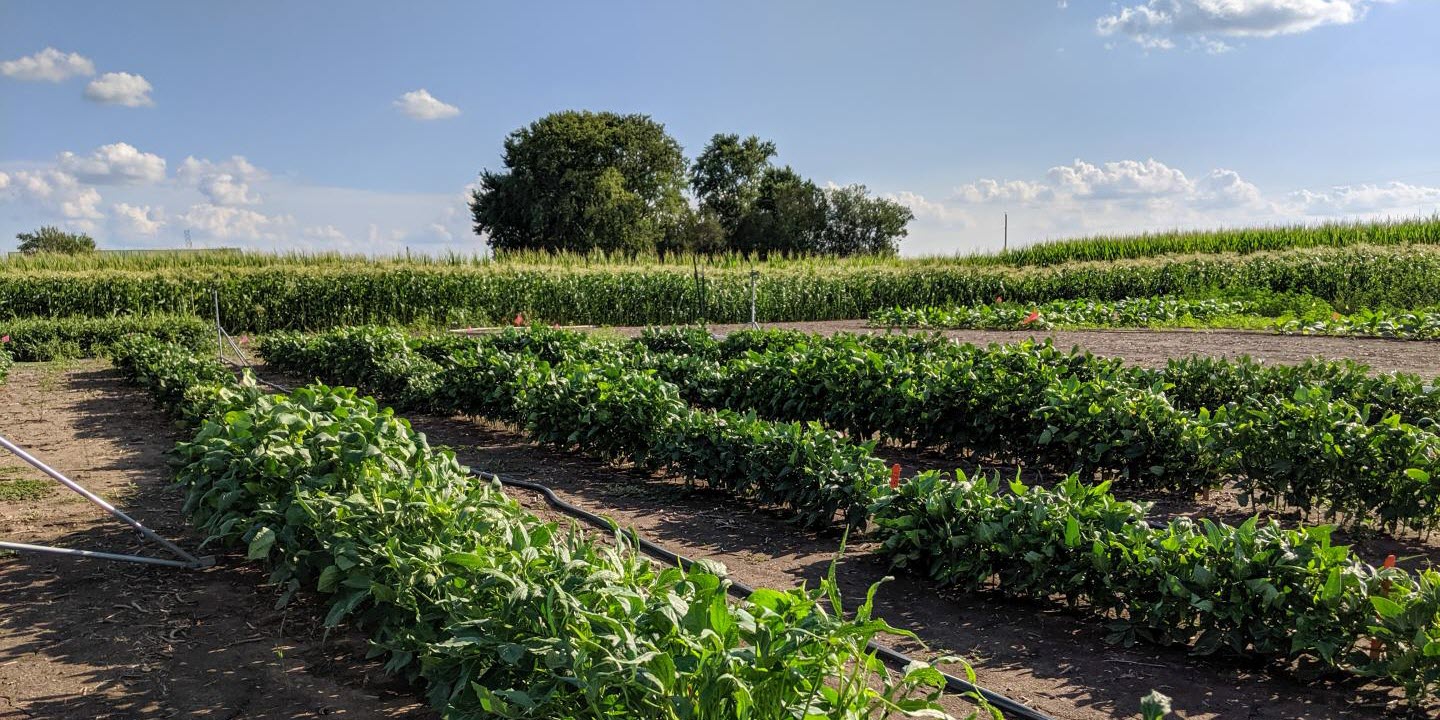 Scientists from the University of Illinois observe traits that can improve yields of cowpea, a staple food crop in sub-Saharan Africa.
RIPE project

Crops grow dense canopies that consist of several layers of leaves—the upper layers with younger sun leaves and the lower layers with older shaded leaves that may have difficulty intercepting sunlight trickling down from the top layers.

In a recent study published in Food and Energy Security, scientists from Realizing Increased Photosynthetic Efficiency (RIPE) aimed to understand how much variation exists within diverse cowpea lines in light absorption and carbon dioxide (CO2) assimilation throughout the canopy. This information can ultimately be used to design more efficient canopies—with greater CO2 assimilation and water-use efficiency—to increase yields.

RIPE, which is led by the University of Illinois, is engineering crops to be more productive by improving photosynthesis, the natural process all plants use to convert light energy to produce biomass and yields. RIPE is supported by the Bill & Melinda Gates Foundation, the US Foundation for Food and Agriculture Research (FFAR), and the UK Government's Department for International Development (DFID). One of the target crops of the RIPE project is cowpea.

Cowpeas, commonly known as black-eyed peas in the US, are one of the oldest domesticated crops in the world, responsible for feeding more than 200 million people per day.

"They are a staple crop in Africa, providing a source of protein for humans and livestock, and restoration of soil nutrition through nitrogen fixation," said Lisa Ainsworth, a research plant physiologist with the US Department of Agriculture, Agricultural Research Service (USDA-ARS).

The RIPE team screened 50 cowpea genotypes from a multi-parent advanced generation inter-cross (MAGIC) population for canopy architecture traits, canopy photosynthesis, and water-use efficiency by using a canopy gas exchange chamber. This chamber was used to measure the rate by which plants would convert CO2 in the atmosphere into carbohydrates as energy for growth.

"Since sub-Saharan Africa is the region where important yield gaps persist, it is crucial that we develop a high yielding crop that can be easily grown there," said first author Anthony Digrado, a USDA-ARS postdoctoral researcher in Ainsworth's lab based at Illinois. "That is to say that water-use efficiency should be taken into serious account when developing new varieties for sub-Saharan African countries that are challenged by access to water in several regions."

The team used Principal Component Analysis (PCA) models to first group the 50 MAGIC genotypes into five general canopy architectural types to study plant traits, including leaf area index, leaf greenness, and canopy height and width. This analysis gave researchers the ability to gather an overview of the traits, or combinations of traits, that could be modified to have the strongest impact on canopy photosynthesis to maximize growth. 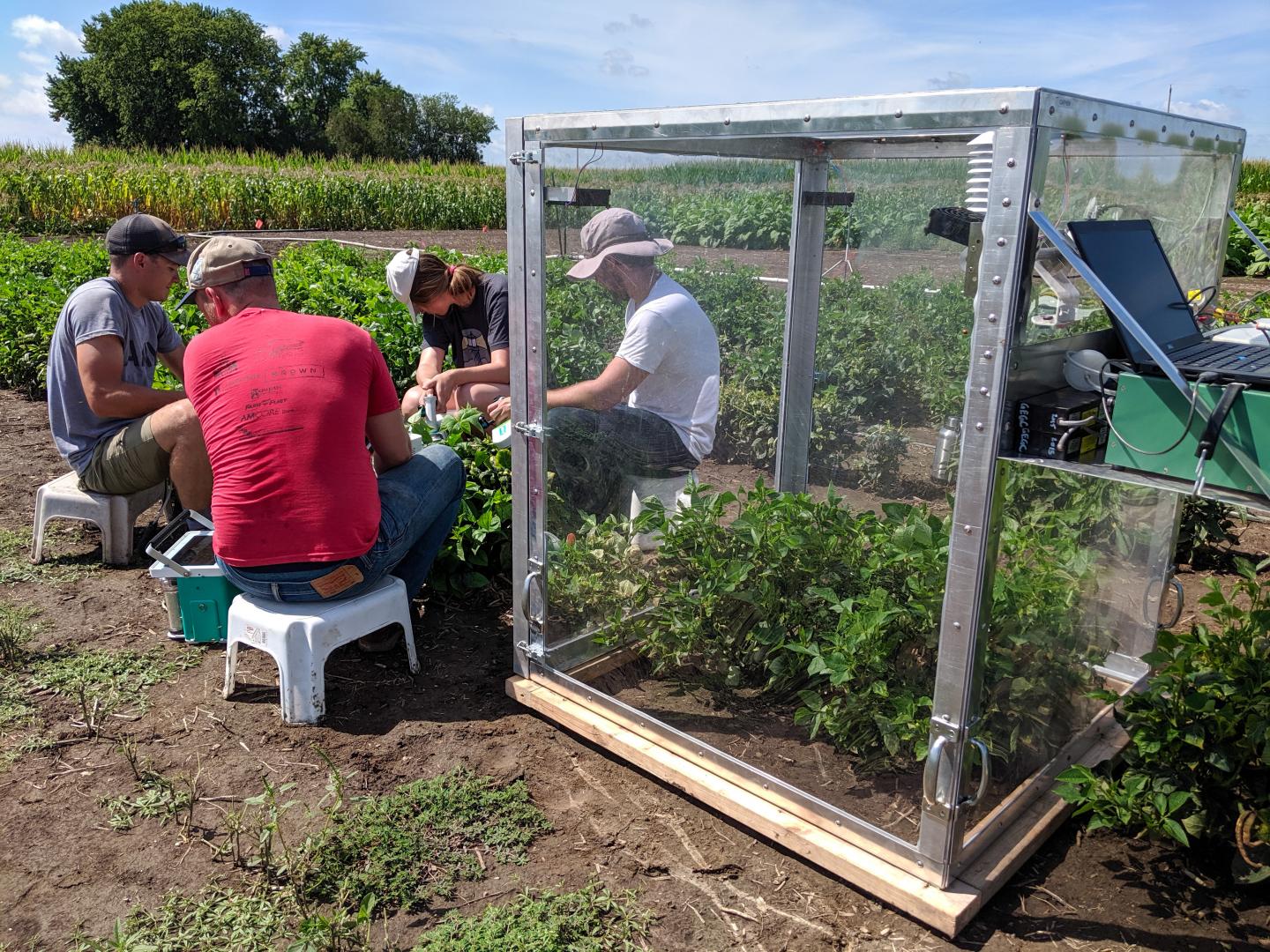 A team collects data from cowpea population at the University of Illinois.
RIPE project

"Water-use efficiency refers to the amount of CO2 assimilated by a crop canopy relative to the amount of water that is lost by the canopy," said Digrado, who led this work at the Carl R. Woese Institute for Genomic Biology (IGB). "The ideal for a crop is to be able to have a lot of carbon intake without losing too much water."

The MAGIC cowpea population that the team used matches this criteria for an ideal crop, especially one to be grown in the drought conditions of Africa. However, research on how canopy architecture affects canopy CO2 assimilation and water-use efficiency in cowpea continues to be scarce.

"There is still a lot to do to improve cowpea yields and much more research is needed," Digrado said. "But this work has established that variation exists that can be used to improve productivity and efficiency of an important food security crop."

The RIPE project and its sponsors are committed to ensuring Global Access and making the project's technologies available to the farmers who need them the most.

- This press release was originally published on the RIPE website