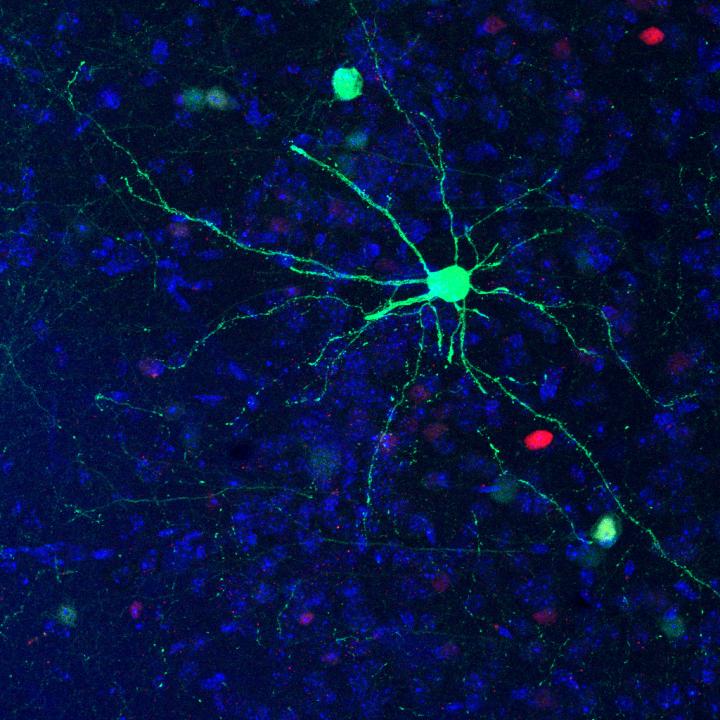 Pyramidal cells in the mouse prelimbic cortex (shown in blue) that were active during the formation of a discrete memory (shown in green). These cells have been traditionally thought to be less active upon initial memory formation (or shortly after e.g., one day later) and become more active with the passage of time (when accessed at more remote time points e.g. 21 days later).
Dr. Stephanie Grella (Ramirez Lab)

In a new paper published in Learning and Memory, researchers from Boston University's Center for Systems Neuroscience reveal just how much power scents have in triggering the memory of past experiences—and the potential for odor to be used as a tool to treat memory-related mood disorders.

"If odor could be used to elicit the rich recollection of a memory—even of a traumatic experience—we could take advantage of that [therapeutically]," says Boston University neuroscientist Steve Ramirez, assistant professor of psychology and brain sciences and senior author of the study.

Until now, the scent-memory connection has been something of an enigma. In fact, even the mechanisms that underlie memory formation in general have been debated in recent years. The traditional theory—systems consolidation theory—suggests that our memories start out being processed by a small, horseshoe-shaped brain area called the hippocampus, which infuses them with rich details. Over time, especially when we sleep, the set of brain cells that holds onto a particular memory reactivates and reorganizes. The memory then becomes processed by the front of the brain—the prefrontal cortex—instead of the hippocampus, and many of the details become lost in the shuffle.

This theory has its merits. For starters, it would explain why our memories tend to get a bit fuzzy as time passes. It also helps explain why people with hippocampal damage are often unable to form new memories while their ability to keep old, prefrontal cortex-stored memories remains perfectly intact. In contrast, those with prefrontal cortex damage often exhibit the flavor of amnesia we often see in soap operas: an inability to remember the past.

However, critics of the systems consolidation theory maintain that it doesn't tell the whole story. If memories slip out of the hippocampus and become stripped of their details over time, then why do many people retain vivid recollections of an event even years later—particularly people with post-traumatic stress disorder (PTSD)? And why do scents, which are processed in the hippocampus, sometimes trigger seemingly dormant memories?

To answer these questions, Ramirez and members of his lab created fear memories in mice by giving them a series of harmless but startling electric shocks inside a special container. During the shocks, half of the mice were exposed to the scent of almond extract, while the other half were not exposed to any scent. The next day, the researchers returned the mice to the same container to prompt them to recall their newly formed memories. Once again, the mice in the odor group got a whiff of almond extract during their session, while the no-odor group was not exposed to any scent. But this time, neither group received any new electric shocks. Consistent with the systems consolidation theory, both groups exhibited significant activation of the hippocampus during this early recall session, indicating they remembered receiving the shocks from the day before.

Related Article: The Brain May Actively Forget during Dream Sleep 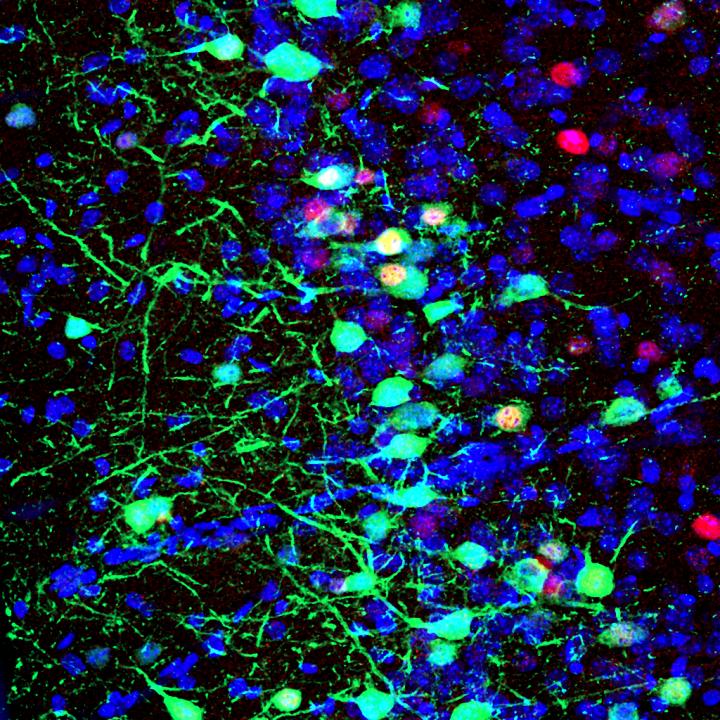 Pyramidal cells in the mouse prelimbic cortex (shown in blue) that were active during the formation of a discrete memory (shown in green). These cells have been traditionally thought to be less active upon initial memory formation (or shortly after e.g., one day later) and become more active with the passage of time, when accessed at more remote time points e.g. 21 days later (shown in magenta) leading to higher degree of overlap in these populations of neurons (shown in yellow).
Dr. Stephanie Grella (Ramirez Lab)

However, during the next recall session 20 days later, the researchers were in for a shock of their own. As expected, in the no-odor group, processing of the fear memory had shifted to the prefrontal cortex—but the odor group still had significant brain activity in the hippocampus.

"[This finding suggests] that we can bias the hippocampus to come back online at a timepoint when we wouldn't expect it to be online anymore because the memory is too old," Ramirez says. "Odor can act as a cue to reinvigorate or reenergize that memory with detail."

Ramirez adds that we still aren't sure about odor's exact role in memory processing. Perhaps odors delay a memory's shift to relying on the prefrontal cortex, thereby preserving the details for longer. If this is the case, an odor needs only to be present during memory formation for a memory to retain its vividness. Alternatively, it's possible that the prefrontal-cortex shift still occurs in an odor-associated memory, but that if the same odor emerges again later on, the hippocampus becomes reactivated and the memory regains the details it had lost.

Regardless of the specifics, Ramirez says that this research provides us with a "blueprint" of memory processing in nonhuman animals, and this information might one day lead to breakthroughs in the treatment of mental health conditions in humans, such as PTSD. 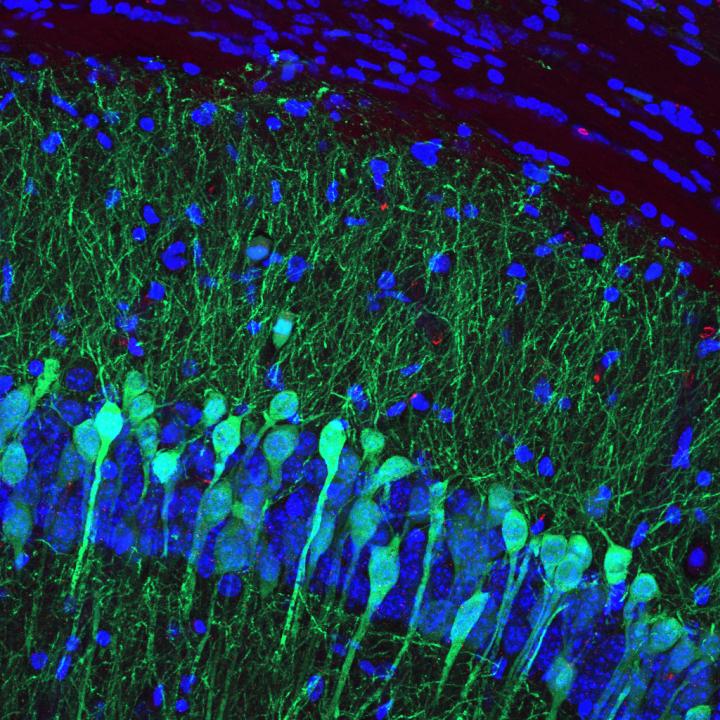 Engaging hippocampal engrams across time. Granule cells in the mouse hippocampus (shown in blue) that were active during the formation of a discrete memory were selectively targeted to express activity-dependent DREADDs (shown in green; designer receptors exclusively activated by designer drugs). These hippocampal cells were traditionally thought to be more active shortly after memory formation (e.g., one day later) and less so when accessed at more remote time points (e.g. 21 days later). Here we show that when salient memories are imbued with highly contextual information such as an odor, this process of systems consolidation is delayed, as they continue to rely on the hippocampus for processing
Dr. Stephanie Grella (Ramirez Lab)

Many psychotherapy- and drug-based treatments for PTSD involve trying to suppress or dampen traumatic memories, but this process can only be carried out effectively when people actively recall the memories first.

"Now that we know that odor can shift memories to become more hippocampus dependent, we could potentially develop strategies that engage or disengage the hippocampus. And then we could integrate some behavioral or drug-based approaches to bring the hippocampus back offline if our goal is to permanently suppress a fear memory," Ramirez says.

In other words, the scents that spark our memories may be more powerful than we realize. Today, they serve as the triggers for our nostalgia and our anxiety—but tomorrow, they could be our treatments.

"We can potentially view memory as its own kind of drug—as an antidepressant or [anxiety reducer]," Ramirez says. "And [odor] could be an experimentally controllable factor that we could deliver to people. It may be a very powerful tool."