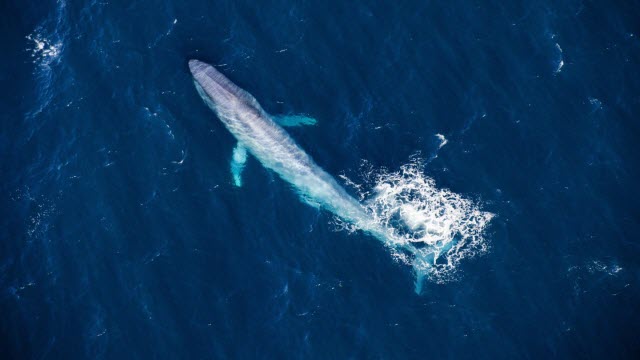 Frankfurt am Main/ Germany, April 5, 2018 — For the first time, scientists of the German Senckenberg Biodiversity and Climate Research Center, Goethe University, and the University of Lund in Sweden have deciphered the complete genome of the blue whale and three other rorquals. These insights now allow tracking the evolutionary history of the worlds' largest animal and its relatives in unprecedented detail. Surprisingly, the genomes show that rorquals have been hybridizing during their evolutionary history. In addition, rorquals seem to have separated into different species in the absence of geographical barriers. This phenomenon, called sympatric speciation, is very rare in animals. The study has just been published in Science Advances.

Blue whales are the giants of the sea. With up to 30 meters (100 feet) long and weighing up to 175 tons, they are the largest animals that ever evolved on earth; larger even than dinosaurs. Short of becoming extinct due to whaling by the end of the 80s, currently the populations of the gentle giants are slowly recovering. Now new research highlights that the evolution of these extraordinary animals and other rorquals was also anything but ordinary.

A research team led by professor Axel Janke, evolutionary geneticist at the Senckenberg Biodiversity and Climate Research Center and Goethe University, has found that the rorquals, including the blue whale, mated across emerging species boundaries. "Speciation under gene flow is rare. Usually, species are assumed to be reproductively isolated because geographical or genetic barriers inhibits genetic exchange. Apparently however, this does not apply to whales," explains Fritjof Lammers, co-lead-author of the study, Senckenberg Biodiversity and Climate Research Centre.

Teaming up with cetacean specialist and professor Ulfur Arnason at University of Lund, Sweden, Lammers and his colleagues are the first to have sequenced the complete genome of the blue whale and other rorquals, including the humpback and the gray whale. For these migratory whales, geographical barriers do not exist in the vastness of the ocean, instead some rorquals differentiated by inhabiting different ecological niches. Cross-genome analyses now indicate that there are apparently no genetic barriers between species and that there has been gene flow among different rorqual species in the past.

This is confirmed by spotting hybrids between fin and blue whales still to date, which have been witnessed and genetically studied by Arnason. However, the researchers could not detect traces of recent liaisons between the two species in their genomes. This is probably because whale genomes are currently known only from one or two individuals.

To track down the rorquals' evolution, the scientists have applied so-called evolutionary network analyses. "In these analyses, speciation is not considered as a bifurcating phylogenetic tree as Darwin has envisioned it, but as an interwoven network. This allows us to discover hidden genetic signals, that otherwise would have stayed undetected," says Janke.

Overall, the research also shows that the relationships among the rorqual species are more complicated than hitherto thought. So far, the humpback whale has been seen as an outsider among the rorquals because of its enormous fins. The genome reveals that this classification does match the evolutionary signals. The same is true for the gray whale, which was believed to be evolutionarily distinct from rorquals due to its appearance. Genomic analyses show however that gray whales are nested within rorquals. Gray whales just happened to occupy a new ecological niche by feeding on crustaceans in coastal oceanic waters.

"Our research highlights the enormous potential of genome sequencing to better understand biological processes and the fundamentals of biodiversity. It even reveals how population sizes of whales have changed during the last million years", summarizes Janke. Janke is one of the leading researchers at the Hessian LOEWE Research Centre for Translational Biodiversity Genomics (LOEWE-TBG). Launched in January 2018, LOEWE-TBG is set to systematically analyze complete genomes or all active genes. The research center is envisaged to do basic research with a strong emphasis on transferring knowledge to benefit the study of natural products and protect biodiversity.