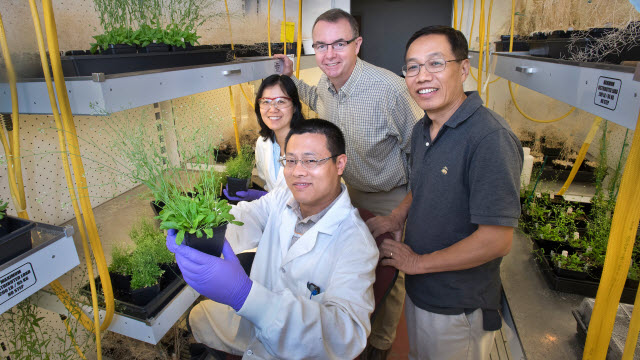 A Brookhaven Lab research team led by John Shanklin (standing, rear) explored strategies for increasing oil production and accumulation in plant leaves. Zhiyang Zhai (seated, holding plant) carried out the biochemical-genetic studies with technical support from Hui Liu (left) and assistance in data interpretation from Changcheng Xu (right).Photo courtesy of Brookhaven National LaboratoryUPTON, NY—Eat too much without exercising and you’ll probably put on a few pounds. As it turns out, plant leaves do something similar. In a new study at the U.S. Department of Energy’s Brookhaven National Laboratory, scientists show that retaining sugars in plant leaves can make them get fat too.

In plants, this extra fat accumulation could be a good thing. It could help turn plants into factories for making biofuels and other useful chemicals. But you can’t just feed plants cookies and donuts to get leaves to pump out more oil. 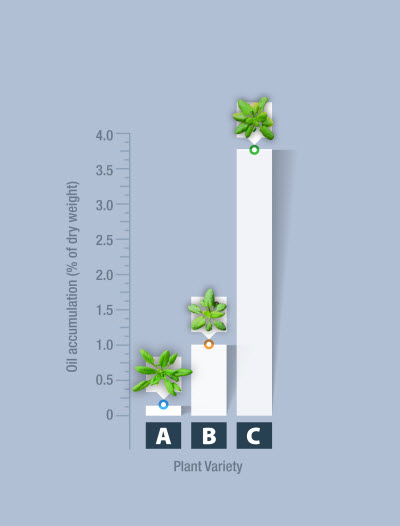 This graph shows how combining genetic mutations can increase the accumulation of oil in the leaves of a common laboratory plant. A is the wild type Arabidopsis plant with no mutations; B is Arabidopsis with two mutations that disrupt both the transport of sugar out of leaves and the conversion of sugar to starch; C has the same mutations as B plus two additional mutations: one to block another sugar-conversion pathway, and one to block the transport of lipids. The results suggest this biochemical-genetic strategy could contribute to increasing oil production and accumulation in the vegetative tissues of plants grown for biofuels or other commodity products.Graph courtesy of Brookhaven National Laboratory“Plants make their own food,” said John Shanklin, the Brookhaven Lab biochemist who led the research. “They convert sunlight, water, and carbon dioxide into sugars through photosynthesis, and those sugars are usually transported out of leaves to other parts of the plant, and converted to other compounds plants need for growth and development. Oils tend not to accumulate to high levels, except in some seeds.”

To tip the balance in favor of higher oil production and accumulation in leaves—which would be more abundant and accessible than seeds for making bio-based chemicals—the scientists needed detailed knowledge of the biochemical processes that drive the metabolic pathways and the genes that control them. As described in a paper published in the journal Plant Physiology, the Brookhaven team selectively bred plants to combine a series of traits that blocked some of the sugar transport and conversion pathways, which resulted in increased oil production and accumulation.

The scientists suspected that keeping more sugar in leaves would increase oil production in those vegetative tissues based on their earlier research. That work identified how high sugar levels inhibit a regulatory protein that plays a key role in the breakdown of another protein that serves as a switch for turning on oil-production genes. In the current study, the scientists found increased levels of the on-switch protein along with higher levels of oil precursors and oil.

“Combining genetic mutations that decrease the transport of sugar out of leaves and the conversion of sugars to starch increases sugar levels in leaves,” Shanklin said. “That excess sugar drives increased oil production by stabilizing the oil on-switch, and also by supplying the carbon building blocks needed to make more oil in leaves.”

The scientists also bred plants that combined the sugar-increasing traits with other mutations, including one that limited the breakdown of plant lipids, which resulted in further increases in oil precursor accumulation in leaves.

“In several cases, combinations of these mutations helped tip plant metabolism to produce and store more oil than expected in leaves,” Shanklin said.

“Findings from these foundational biochemical-genetic studies provide valuable insights into the relationship between sugar, oil precursors, and oil accumulation in leaves that will help inform biotechnological efforts to optimize oil accumulation in vegetative tissues of economically important plants.”