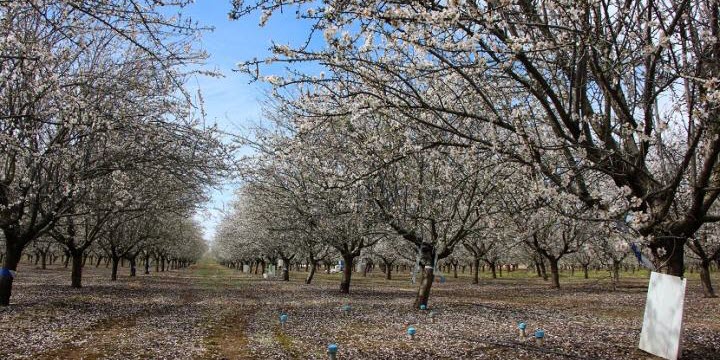 Case study in which the research was carried out.
University of Cordoba

Spain boasts the largest cultivated area of almond trees in the world, with more than 700,000 ha (MAPA, 2018), but ranks third in terms of production. How can this be? Actually, it's easy to explain: most of the country's cultivated area of almond trees is comprised of traditional rainfed orchards and located in marginal areas featuring a low density of trees per hectare.

Over the last decade, however, the nut's surging prices have given rise to intensive almond tree plantations characterized by a high density of trees per hectare and the employment of fertilization and irrigation, yielding endless rows of white when the trees are in bloom. Knowing what the future of these plantations will be like in a country where the availability of water for irrigation is limited is one of the main tasks tackled by agronomic research.

The recent establishment of this type of plantation makes it difficult to conduct long-term studies on them. The creation of these new plantations requires significant investments that are not recovered for several years, so studying the productive sustainability of the crop over the life of the plantation is of the utmost importance. One of the questions to be answered in this context is whether the widespread practice of deficit irrigation (i.e. irrigation below the crop's needs) can lead to a drop in productivity in the long term. In order to answer this question, a team formed by researcher Álvaro López Bernal and professor Elías Fereres, with the María de Maeztu Unit of Excellence - Department of Agronomy at the University of Cordoba (DAUCO), together with researchers from IFAPA and the CSIC's Institute of Sustainable Agriculture (IAS - CSIC), have analyzed the response of almond production under different deficit irrigation strategies between 2014 and 2019.

Comparing the data obtained for the initial (2014-2016) and final (2017-2019) three-year periods, it was shown that the production functions were practically identical. This result suggests that, based on the conditions and duration of the trial, "the deficit irrigation treatments implemented make it possible to maintain sustained production over time, without a gradual drop in production," says López Bernal. Therefore, the deficit irrigated trees in this study did not exhibit signs of reserve depletion or a reduction in the renewal capacity of the mixed bunches and May clusters yielding flowers and fruit.

Although the difference in production between the fully irrigated treatment and the more severe deficit irrigation was significant (2,660 vs 1,430 kg of almond kernels per year), the study suggests that the productive capacity of the trees remained stable over the six years of the experiment even for those subjected to severe deficit irrigation. It is important to bear in mind that the grower's water supply in Spain is more similar to that of deficit irrigation treatments than to any of the others, hence the importance of knowing what happens to production under these water conditions. It should be noted that this study sheds light on the effects of this practice over a longer period than those that had been analyzed to date.

- This press release was supplied by the University of Cordoba. It has been edited for style