Norovirus outbreaks across the country are on the rise. The virus, one of the most contagious according to experts, affects millions of people in the U.S. each year. This new study takes a closer look at which prevention strategies work best in stopping the spread of norovirus in the retail food setting—one of the most common sources of an outbreak.

MCLEAN, Va. — If you’re sick, stay home. Wash your hands before preparing food. When preparing food, always wear gloves or do not touch the ready-to-eat food with bare hands. For food service workers, following this simple advice, which is part of the FDA Food Code, could drastically reduce the spread of norovirus, the most common type of foodborne illness. These results come from a new U.S. Food and Drug Administration study published in the latest issue of Risk Analysis, the scholarly journal of the Society for Risk Analysis. 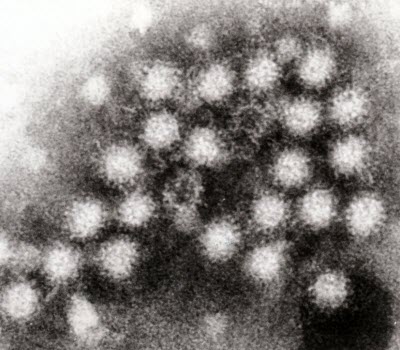 Transmission electron micrograph of norovirus particles in feces.Image credit: Graham Beards, Wikimedia CommonsThe study reveals that ensuring all symptomatic food employees do not work if they are experiencing symptoms of vomiting, and diarrhea, including a 24-hour time period after the symptoms subside, as well as installing touchless faucets and doors, would significantly reduce the transmission of norovirus in food establishments.

The study showed that customers were 226 percent more likely to get infected when symptomatic food workers did not stay home from work. This shows that enforcing the rule that food workers should stay home when ill will reduce the spread of norovirus among customers.

According to the Centers for Disease Control and Prevention, most foodborne norovirus outbreaks occur in restaurants. Food employees infected with the virus can pass it on to customers, typically after using the restroom and transferring the virus to their hands, then touching food, money, or other contact surfaces.

Because hand contamination in the bathroom is the most common way the virus spreads, the researchers examined the use of touchless faucets and doors in bathrooms. This method is much more efficient in reducing the number of infected customers than cleaning the bathroom more often, they say. The researchers also found that restricting employees from preparing food after being ill may not help curb the spread of norovirus if those employees don’t also use rigorous hygiene practices because other employees usually come in contact with the virus via contamination from non-food contact surfaces and restrooms.

Although researchers have studied various ways to curb the spread of norovirus, no one has yet to pinpoint one single way to best prevent norovirus foodborne illness. To determine which prevention methods work best in a retail food establishment, the FDA researchers developed a research model to  study various strategies involving employees in a restaurant setting. The model simulated a team of three employees in a restaurant setting who would be preparing and assembling sandwiches. After running numerous scenarios with varying levels of compliance (including best sanitation practices and physical/environmental factors), the researchers compared the number of infected customers per scenario to determine which combination of factors would be the most effective at preventing infection.

“While individual prevention strategies have been studied, the relative impact of each of these strategies, their level of compliance, and the interplay of combinations of these strategies on norovirus transmission in food establishments have not been well studied,” suggest researchers Steven Duret, Regis Pouillot, Wendy Fanasalle, Efstathia Papafragkou, Girvin Liggans, Laurie Williams, and Jane M. Van Doren, all of the FDA Center for Food Safety and Applied Nutrition.

Of course, if employees do not have symptoms, they may not realize they are spreading the virus, or they may not have the virus at all but could spread the virus after touching contaminated surfaces in the bathroom. So in addition to keeping sick employees home, other prevention strategies are needed. The study found that the prevention strategies recommended in the U.S. FDA Food Code were effective with full compliance. However, the level of compliance was essential in determining the impact of each intervention strategy. The prevention strategies that led to the smallest numbers of infected customers included full compliance with excluding ill food workers experiencing symptoms of vomiting and/or diarrhea, proper handwashing techniques, glove use, no food contact with bare hands, and increased handwashing efficiency.

The researchers say further studies are needed to determine what factors influence how well workers and restaurants comply with these prevention strategies.