Mother’s milk, which consists of a complex and continually changing blend of proteins, fats and sugars, helps protect babies against bacterial infections.

“This is the first example of generalized, antimicrobial activity on the part of the carbohydrates in human milk,” said assistant professor of chemistry Steven Townsend, who directed the study. “One of the remarkable properties of these compounds is that they are clearly non-toxic, unlike most antibiotics.” 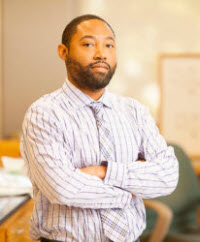 The results were presented Aug. 20 at the annual meeting of the American Chemical Society in Washington DC by doctoral student Dorothy Ackerman and published in the ACS Infectious Diseases journal on Jun. 1 in a paper titled, “Human Milk Oligosaccharides Exhibit Antimicrobial and Anti-Biofilm Properties Against Group B. Streptococcus.”

The basic motivation for the research was the growing problem of bacterial resistance to antibiotics, which the Center for Disease Control and Prevention estimates causes 23,000 deaths annually.

“We started to look for different methods to defeat infectious bacteria. For inspiration, we turned to one particular bacteria, Group B Strep. We wondered whether its common host, pregnant women, produces compounds that can either weaken or kill strep, which is a leading cause of infections in newborns worldwide,” Townsend said.

Instead of searching for proteins in human milk with antimicrobial properties, Townsend and his colleagues turned their attention to the sugars, which are considerably more difficult to study.

“For most of the last century, biochemists have argued that proteins are most important and sugars are an afterthought. Most people have bought into that argument, even though there’s no data to support it,” Townsend said. “Far less is known about the function of sugars and, as a trained glycoprotein chemist, I wanted to explore their role.”

The close-up image on the left illustrates how Strep bacteria normally clump together to form a protective biofilm. The image of the right shows that the biofilm breaks down when a Strep culture is dosed with human milk sugars, exposing more of the bacteria to attack by antibacterial agents.Image credit: Steven Townsend / VanderbiltTo do so, the researchers collected human milk carbohydrates, also called oligosaccharides, from a number of different donor samples and profiled them with a mass spectrometry technique that can identify thousands of large biomolecules simultaneously. Then they added the compounds to strep cultures and observed the result under the microscope. This showed that not only do some of these oligosaccharides kill the bacteria directly but some also physically break down the biofilms that the bacteria form to protect themselves.

“Our results show that these sugars have a one-two punch,” said Townsend. “First, they sensitize the target bacteria and then they kill them. Biologist sometimes call this ‘synthetic lethality’ and there is a major push to develop new antimicrobial drugs with this capability.” 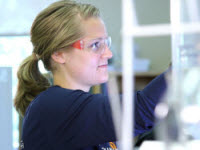 Doctoral student Dorothy Ackerman in the Townsend Lab.Photo credit: Zack Eagles / VanderbiltBy dosing strep cultures with a mixture of milk sugars and antimicrobial peptides from human saliva, the researchers also showed that the sugars’ ability to break down biofilms can also enhance the effectiveness of the other antimicrobial agents that breast milk contains.

In follow-up studies the team has also shown that the milk sugars’ antimicrobial activity extends to a number of other infectious bacteria, including two of the six “ESKAPE” pathogens that are the leading cause of hospital infections worldwide.

Townsend is collaborating with colleagues in Vanderbilt’s Mass Spectrometry Research Center to identify the specific types of carbohydrate molecules responsible for the antibacterial effects they have discovered.