COLLEGE STATION — Texas potato growers may be few in number, but their spuds hit a market window that brings a premium each year at harvest. Now, a new potato scientist for Texas A&M AgriLife Research plans to pack even more value into the commodity through traditional and molecular breeding. 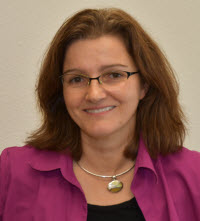 Dr. Isabel ValesImage courtesy of Texas A&M AgriLife ResearchUpon arriving in Texas last January, Dr. Isabel Vales was quick to put down roots both in her greenhouses near the Texas A&M University campus in College Station and hundreds of miles away where potatoes are grown in the northwestern part of the state.

“I’ve been interacting with growers to hear what is important in Texas in terms of potato production. What I have learned is that even though potato production in Texas is not that large—between 20,000 and 30,000 acres—it’s of high value,” Vales said. “Because our growers are able to move fresh potatoes to the market earlier than other states, they receive two or three times higher prices than growers up north.”

But there are some unique challenges for Texas potato producers, she said. High heat and occasional drought may add dimensions to production that a grower cannot control. Lately, a disease known as zebra chip has plagued some fields. And some farmers are interested in expanding into organic production, which calls for different management skills.

Vales said she is nearing a point of developing a plan to help take Texas potato farmers to the next level of production and market efficiency. Consumers also will play a role in the plans, she added, because of their desire for traits such as healthy components and a trendy preference for smaller potatoes.

That’s where her background in genetics will play a larger role. Prior to coming to Texas A&M, Vales used her education in genetics on maize at the University of Minnesota, cereals and potatoes at Oregon State University, and legumes for the International Crops Research Institute for Semi-Arid Tropics in India. 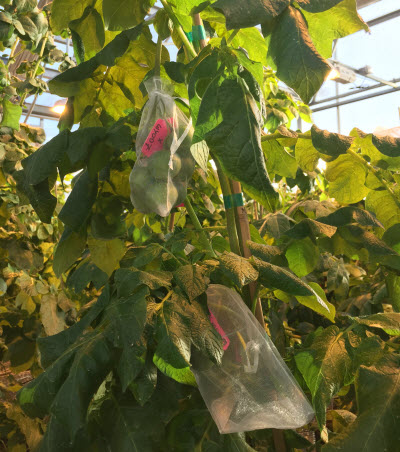 A team under the direction of Dr. Isabel Vales, potato breeder for Texas A&M AgriLife Research, has begun making crosses at a greenhouse in College Station.Photo courtesy of Dr. Isabel Vales“We will be expanding into the molecular aspects of potatoes in Texas so that we hopefully will be able to understand the genetic basis of some of those traits and be able to use markers for selection in our breeding program,” Vales said.

She also will lean on decades of Texas potato experience cultivated by Dr. Creighton Miller, who established the potato breeding program at AgriLife Research in the 1970s.

“I had worked with Dr. Miller in the past, so I knew that this is a mature program in Texas focused mostly on conventional breeding,” Vales said. “I am interested in using all of the new tools that have advanced a lot in potatoes over the last five-plus years. The whole genome sequence is available, and there are lots of genomic resources at our disposal.”

She noted potato varieties commonly used by consumers also have “many genetic resources including landraces and wild relatives that could be used to incorporate traits of interest into the potato breeding program.”

Already Vales and her team at College Station and Lubbock have produced a crop that now is being harvested for examination. She plans to develop a “breeding database management system” to handle the information gathered and learn more about the traits in the breeding materials. She also is setting up a basic molecular lab and will utilize other genetics labs available on campus to hasten her research. 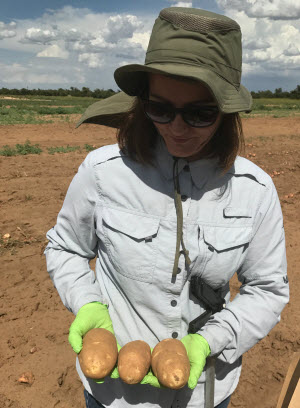 Dr. Isabel Vales, potato breeder for Texas A&M AgriLife Research based in College Station, makes a selection from a test plot on a farm near Springlake, Texas.Photo courtesy of Dr. Isabel Vales“We are getting ready to plant under greenhouse conditions the parental lines to make crosses that hopefully will combine the traits we are interested in,” Vales said. “Some of the commercial varieties have very good traits, but they lack resistance to problems like heat or drought, for example.”

She said they want to cross cultivated or elite—advanced breeding clones—types of potatoes with others to facilitate resistances, then select within the progeny those that combine high yield and quality with resistance.

The crosses done at her greenhouses near College Station ultimately will be grown in test plots under actual field conditions near Springlake and Dalhart in collaboration with potato growers there.

“I cannot emphasize enough how thankful I am for the growers. Their collaborations are essential,” she said. “Each time I talk to them I always learn something new about what matters, what they are looking for. So that helps me figure out what to focus on and how to prioritize and move forward.”